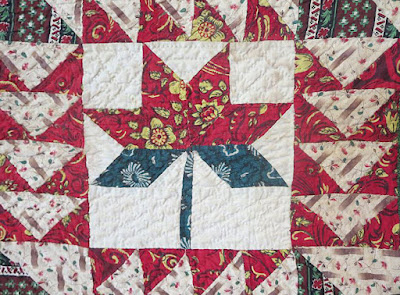 When the Civil War began Frances Alexes Fawcett Smith Hopkins was about 30 years old and newly married to her second husband Dr. Benjamin Franklin Hopkins. Frances brought a daughter Josephine Smith from her first marriage to Joseph Smith and the Hopkinses soon had Nannette in 1860. The first years of the Hopkins' life together were full of anxiety and grief---the lot in life for women of her generation. 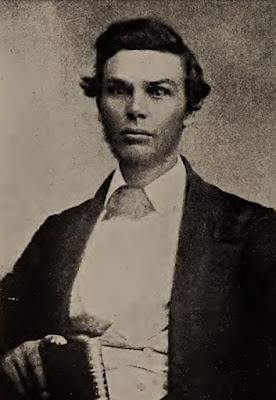 In September, 1861 Frances's sister Nancy L. Fawcett died of consumption (tuberculosis) at the age of 29. Fortunately, Benjamin, who signed her death certificate, survived the War. Records inform us  "badly afflicted with rheumatism" he was mustered out. 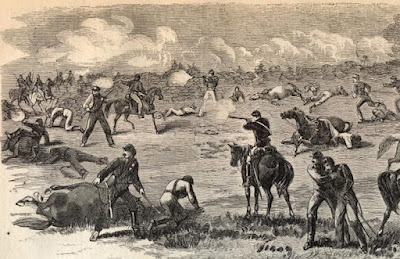 Battle of Upperville, Harper's Weekly
William H. Hopkins, Benjamin's brother, also enlisted in the Confederate Army. In June, 1863 he was wounded at the Battle of Upperville in Loudon County. His obituary 30 years later said he "was shot through the lungs and carried the ball in his body to the day of his death."
A more joyful event was the war-time birth of boy Dilworth in 1863, followed after the War by three more girls Irene (b 1866) Chertsey (b 1868) and Orra (b. 1874) and the youngest Frank (b. 1871) 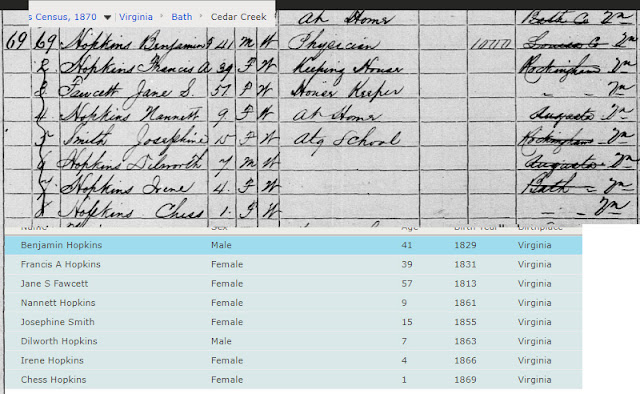 The 1870 census finds them in Cedar Creek Township in Bath County. Also living with them was Jane Crawford Fawcett, Frances & Nancy's mother. Frances and Jane were from nearby Rockingham County. 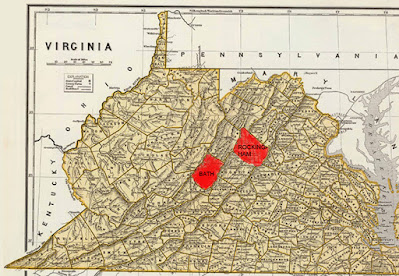 Virginia before West Virginia seceded from the state during the Civil War.
Bath & Rockingham Counties are in the Shenandoah Valley. 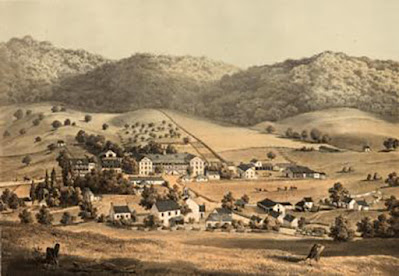 Warm Springs in Bath County
The family lived in Bath County because Dr. Hopkins was a physician
at the hot springs sanitariums in the area, which is full of geothermal springs
that treated everything from his rheumatism to nervousness and depression. 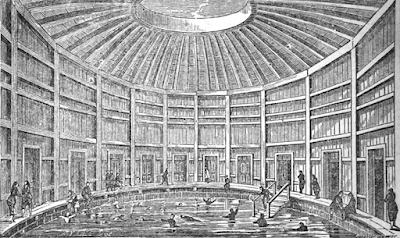 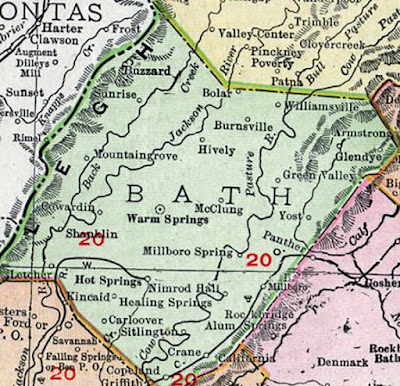 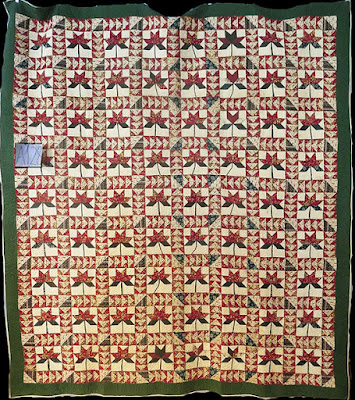 https://quiltindex.org//view/?type=fullrec&kid=15-11-1470
90" x 98"
Perhaps also in the house with the extended Hopkins, Smith and Fawcett family
was this extraordinary quilt, which has been passed down
by people who keep good records of their history. 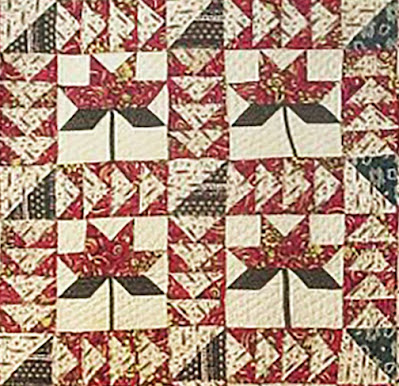 The quilt was rather recently recorded in an event at the Wisconsin Museum of Quilt and Fiber Arts, which continues the work of documenting family quilts. The Wisconsin woman who owns the quilt knew quite a bit about it and her family. She believed that three of her ancestors worked on the quilt, which she thought dated to 1840 or so. She's the a g-g grand daughter of one of them and the g-g-g-g grand daughter of another.
The oldest woman, Nancy Smith Crawford (about 1790-about 1860) cut the fabric and her granddaughters pieced the blocks. Frances was about nine years old in 1840; sister Nancy was maybe a year younger. Their mother was Jane Crawford Fawcett who lived at one time in Harrisonburg, Virginia. 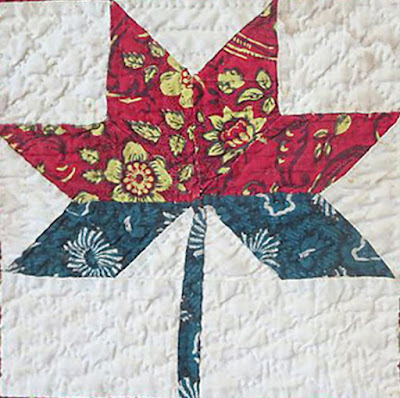 The girls pieced 72 pieced and appliqued blocks
in a pattern popular at the time, often called Peony,
the Fawcett family name. Each block finishes to 6-1/2". 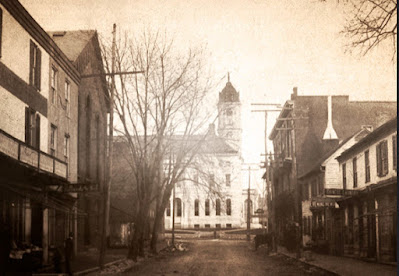 Harrisonburg, Virginia about 1900
Mother Jane Crawford had married Abner Fawcett (1802-1835) son of a store keeper in Harrisonburg in November, 1829 but the girls' father did not live long. His father Joseph Fawcett (1770-1844) lost his store and his fortune and went west to Missouri in 1834, settling in New Franklin in central Missouri on the Missouri River. A year later Joseph moved to St. Charles where the Missouri meets Mississippi. Joseph's branch of the Fawcetts (The Gausses married a Missouri Fawcett) also kept good records and many of their papers are available on line. Joseph told his sons of Abner's death on a visit to Missouri:

"In Sorrow I announce to you the death of your poor brother and my unfortunate son Abner. he died on board the steam boat Magestik opposite to a Town called Bambridge on the Mississippi on the 10th Inst [of this month] and was buried on the say [same?] day a short distance above the Grand Tower on the Missouri side of the river. how oft have the errors of this son pained and grieved me yet how awful was the intelligence of his death.... some times he was wayword but at other times he performed acts of genuine kindness poor dear fellow." March 14th 1835 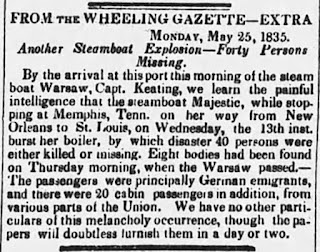 A few weeks later the Majestic's boiler exploded and
Abner is sometimes described as a victim of that disaster
near Memphis but he apparently died earlier of cholera,
epidemic in the river towns in the early 1830s.
His father's description of Abner as "wayword" may explain why he is barely mentioned in the female family records. On her own after he left, Jane Crawford Fawcett took her girls back to her mother Nancy Smith Crawford's farm, where we can guess they were raised in a house of women.

1887: A terrible year for the Hopkins family
Jane Crawford Faucett herself died of "cholera morbus" in the summer of 1887 when she was 77 attended by her son-in-law Dr. Hopkins. That fall daughter Frances, 57, also died. Her husband listed "remittent fever," perhaps malaria, as the cause of death. Frances is listed as Fana, a variation of her nickname remembered as Fanny. Her grandmother Nancy Smith Crawford is said to have died in 1860.
A quilt made by lost family members might have been set aside for generations, one reason it was in such excellent condition 4 or 5 years ago.
Why extraordinary?
1) Age + condition
2) Visual appeal
3) Fabrics
4) Early example of a style & pattern
5) Much provenance or history that can be corroborated in records
Their father's father, Joseph Fawcett, then living in St. Charles, Missouri, visited them in 1840 and brought them fabric to make a quilt. 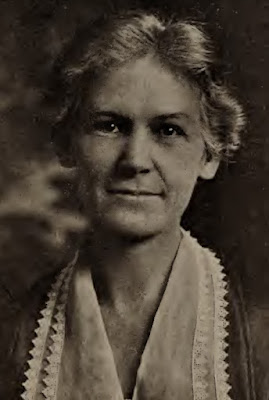 Dr. Chertsey Hopkins DeJarnette (1868-1947)
(Perhaps named after a place in England)
Frances & Benjamin Hopkins's children turned out to be consequential people in their own right. Chertsey and Frank (1871-1959) became physicians. 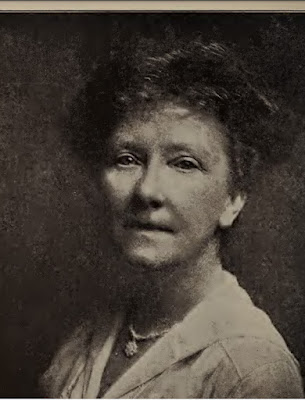 Dr. Nannette Hopkins (1860-1938)
Nannette Hopkins became an educator with a couple of honorary Doctorates as Dean of Georgia's Agnes Scott College. Orra became a Minister's wife. Exceptions were Dilworth who died at 17 in 1880 and Josephine Smith who remained a single woman without much of a paper trail, dying in her 70s in 1928. Most of the family is buried in the Warm Springs Cemetery in Bath County.
Next week more about the Fawcett quilt.

I love this quilt!

What a wonderful story.