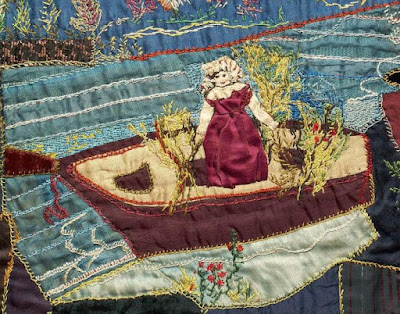 Gathering water lilies
Celestine Bacheller (1839-1922?) is associated with this silk pictorial quilt
in the collection of Boston's Museum of Fine Arts. 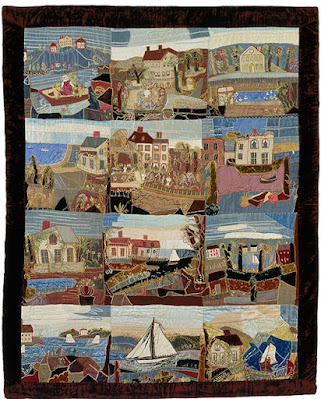 56" x 74"
It has much in common with crazy quilts in the velvets and other weaves and the embroidery style. The accompanying story tells us Celestine in her 50s or so stitched memories of her childhood home in Wyoma, now part of Lynn, Massachusetts.

Wyoma's ponds feature in her landscapes. 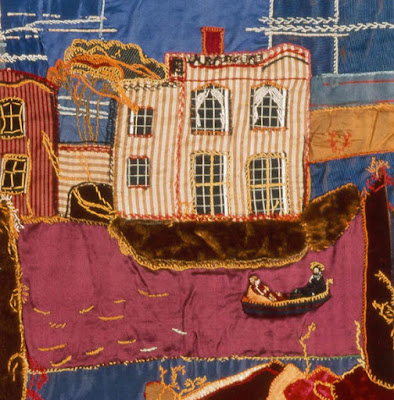 Those waterways made Wyoma a good place for textile manufacture.
Celestine's family was in the silk dyeing and manufacturing business.

The 1850 census shows her father Alfred Bacheller as a Silk Dyer.
Hannah Roles Bacheller at 33 has 6 children from Celestine the eldest at 11
to baby Charles. 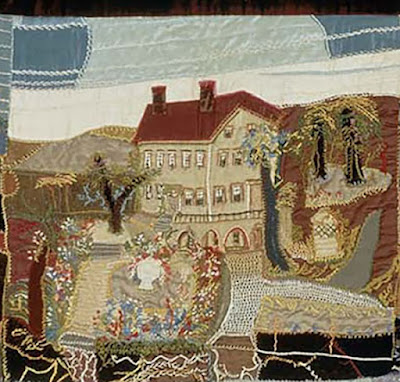 The family home at 395 Broadway on the Flax Pond

1860 Census
Hannah had two more girls in the 1850s. Alfred prospered according to this census and
teenagers Hartshorn and Lindley were also working in the silk business.

Port Hudson near Baton Rouge, Library of Congress
When the Civil War began Alfred joined the 38th Massachusetts Infantry,
which took part in the Siege of Port Hudson, Louisiana in the summer of
1863. In August he was killed and buried in Louisiana.

1880 Census
Hannah took Celestine and younger girls Adeline and Lillian to live in Boston, where they remained. Her sons may have contributed to their female family members' upkeep but the Bacheller women earned a living as seamstresses. 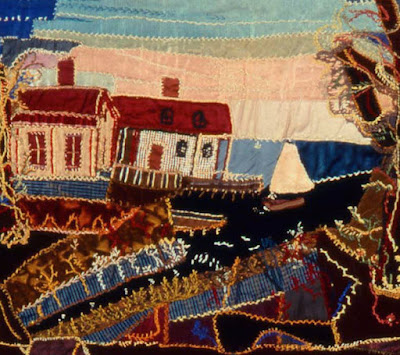 Dating the quilt by style and its relationship to the crazy quilts that became the rage after 1883, we'd date this then from sometime in the early 1880s until Celestine's death about 1922. Perhaps her seamstress sisters helped. The abundance of silks of various kinds might have been left over from professional sewing jobs or perhaps they bought the many packages of clothing factory cutaways available about 1900. The M.F.A. label tells us she was the forelady in a Boston tailor's shop in the 1880s and may have taken home scraps for the project. 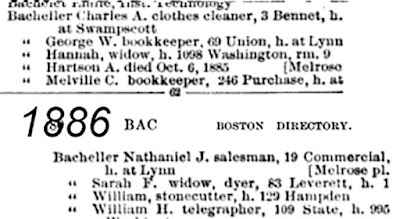 Celestine is not listed in 1886 but George may be a brother, and Sarah a sister in law. 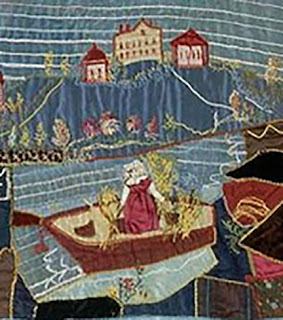 The quilt was probably made in Boston when the waterside home was just a family memory.

When Hannah died in 1891 they were still in Boston, boarding at 1098 Washington Street. Celestine never wed but Adeline married someone named Handrew (?) and Lillian married an O'Malley. By 1920 the three sisters were living together in Roxbury on West Cottage Street with the only man in the house Lillian's son Charles O'Malley then 29. 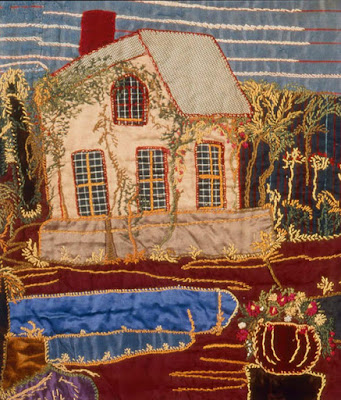 Charles or his wife may have inherited the quilt as it was donated by Mr. and Mrs. Edward J. Healy in memory of Mrs. Charles O'Malley. 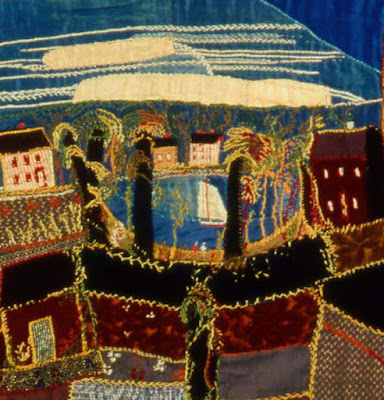 What a beautiful quilt!

I was lucky to see this quilt in the fall at Boston's Musuem of Fine Arts. The quilt was amazing with the details and the use of crazy quilt. There were many people huddled around it however there were people surrounding most of the quilts that told wonderful stories. The show was called "Fabric of a Nation." The catalog has been published and is a wonderful statement of the show. I am so happy to see your research, as always.