Letters to the G.A.R.'s National Tribune

The National Tribune was a newspaper published for members of the Union
veterans' group the Grand Army of the Republic (GAR) and the women's
auxiliary organizations. 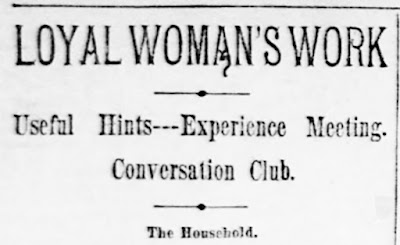 Women were a good part of the readership and contributors. 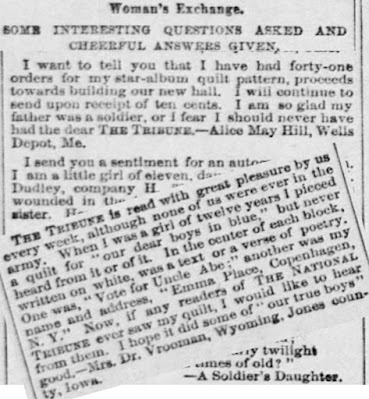 People told stories about quilts; a search for the word in the newspaper turns up dozens of hits.
Here in 1884 two women wrote to the Woman's Exchange column about quilts. Alice May Hill of Wells Depot, Maine was raising money, probably for a G.A.R. hall in nearby Kennebunk by selling patterns to readers for a "Star-Album quilt" for a dime a piece. 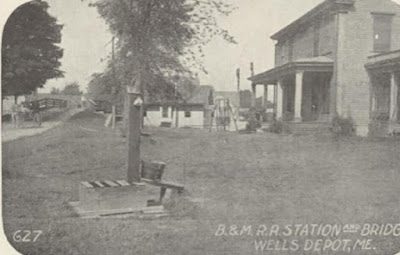 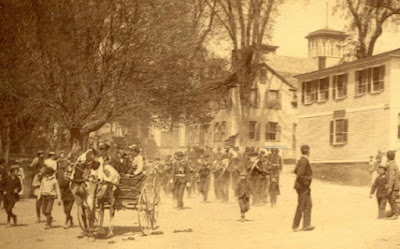 Maine Memory Network
Alice seems to have been rather young; her father a veteran,
perhaps one of these marching in a parade in Kennebunk.

Emma Vrooman remembered a quilt she made when she was 12 with
text in the center of each block. Had anyone ever seen it since she sent it off decades earlier?
She implies her name is Emma Place but that is a punctuation problem.
It should have read:
Emma, Place: Copenhagen, N.Y. 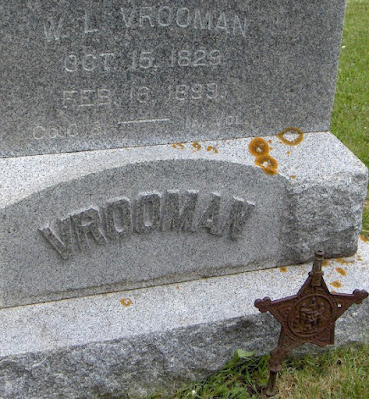 However, this Emma Vrooman's husband was a veteran
with a G.A.R. star on his grave.
The National Tribune was published between 1877 and 1917, a good source for information about veterans, their families and their social culture which was such an important part of post-Civil-War life.
Posted by Barbara Brackman at 6:00 AM