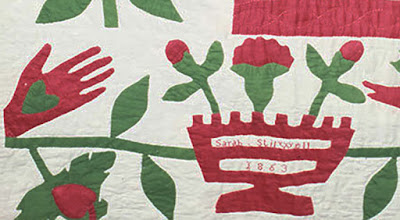 Applique quilt signed Sarah Stilwell, 1863, documented in the New York Quilt Project. Made in New Paltz, Ulster County. Sarah, born in 1833, was thirty when she finished this quilt. 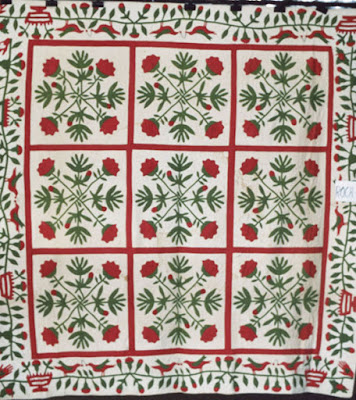 Sarah's great-grand niece brought the unusual
quilt to be recorded. She knew quite a bit about
the maker---
Family history remembered Sarah as a professional seamstress. "She and her sister had a millinery and dressmaking shop." We can find out quite a bit more about her and her family. 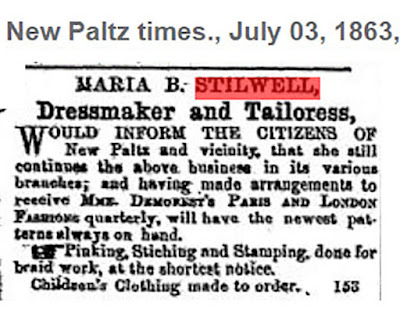 During the year the quilt was signed Sarah (1833-1908) and her older sister Maria Blandina Stilwell (1827-1898) advertised a dressmaker and "tailoress" business under Maria's name. They sold Mme. Demorest's magazine and undoubtedly made clothing in the latest fashion. They also offered pinking and stamping for braid work. Stamping was a common way to transfer patterns of all kinds. Pinking might refer to cutting a pinked edge but it also might have something to do with perforating paper, another way to transfer pattern.

The Stilwell sisters were daughters of Stephen Stilwell and Catherine Hasbrouck Stilwell, farmers who lived on the west side of the Wallkill before they moved to town.
The Civil War seemed to have had little impact on their lives, so far from the fighting. None of their brothers looks to have enlisted; we don't know how many friends of their generation were lost. Their lives continued much the same after the war.

The 1870 census finds them living with their parents and sister Eliza,
a teacher. Anne Sutton was a boarder; probably an employee in the
dressmaking business. 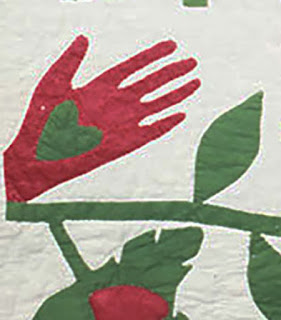 Not many quilts dated during the Civil War have survived. Fabric was scarce and many bedcovers went to hospitals. Calico seems to have been available in New Paltz at several general stores, if a bit expensive compared to pre-war prices. 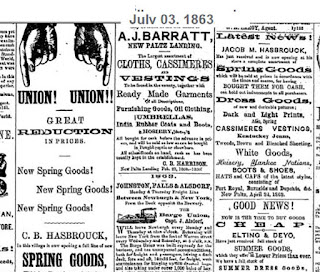 There were two Hasbrouck dry goods stores nearby, one run by Charles B. Hasbrouck whose wife was
also a professional seamstress and milliner. Hasbrouck was a common name and all were related to their mother. 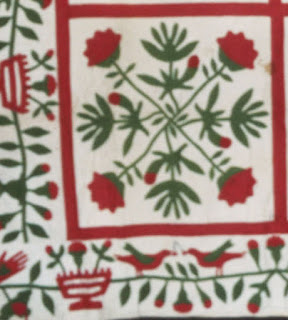 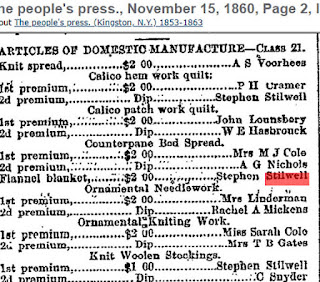 I found no mention of the Stilwell sisters handiwork in local fair records but just before the war a curious reference to their father entering bedcovers into the Ulster County Fair of 1860, a flannel blanket for which he won a $2 prize and a "calico hemwork quilt" (applique?) for which he won a second place diploma. He also won $1 on knit woolen stockings. Now Stephen Stilwell might have spent his retirement years quilting and knitting but it seems more likely his daughters or wife were the actual needleworkers. 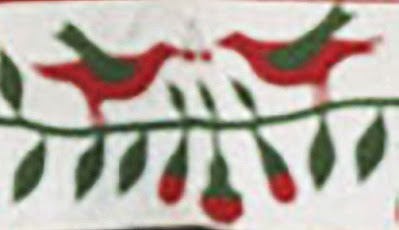