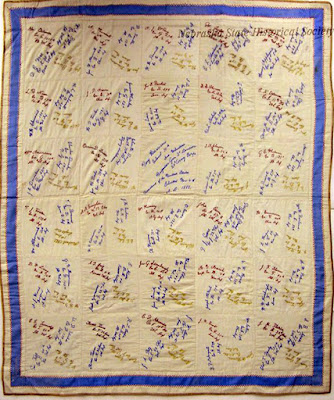 The Nebraska Historical Society owns this wool challis
signature quilt with soldiers' names embroidered in red, blue and gold.
It looks like a fundraising or commemorative quilt. Dates include 1888 and 1891. 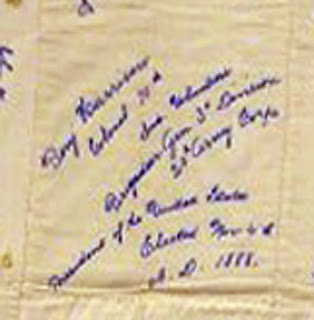 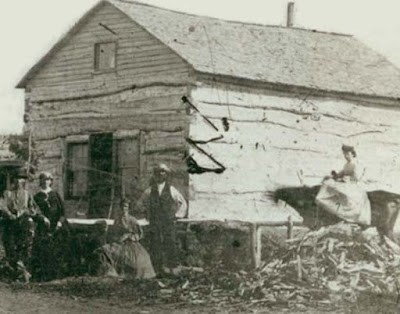 Women at the Roland Reed ranch on the Big Blue in 1866
Nebraska Historical Society
The quilt's caption tells us it belonged to Miss Iva Carter who was given it by her uncle William F Carter of  Co. F. 101st Indiana Infantry. The family believed he'd won it in a raffle in Beaver Crossing in 1891. I wonder if the soldiers aren't Indiana veterans and that's why Harrison is given a prominent spot.
WRC refers to the Women's Relief Corps, auxiliary of the Civil War Union Veterans' organization the Grand Army of the Republic. The Beaver Crossing GAR was organized in 1883. 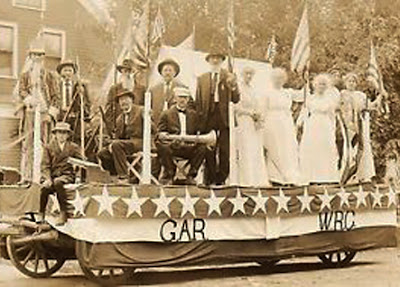 GAR/WRC Parade Float about 1900
I'd be surprised to find this quilt actually dating as early as 1888. 1891 also seems a little early. It just doesn't fit circa 1890 style. It would be good to be able to read the names to see more about the soldiers and who else might be remembered on the quilt. Harrison himself died in 1901. 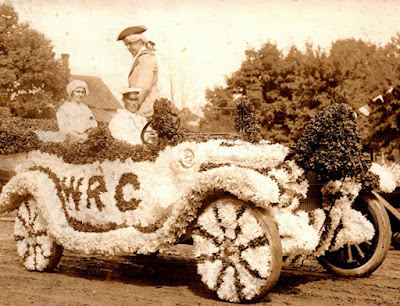 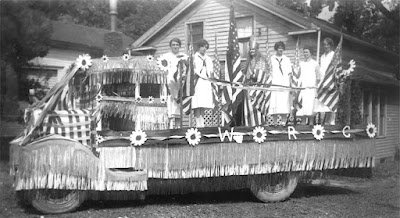 WRC members continued to parade on patriotic occasions
and make quilts to support their work of remembering veterans and
helping their families.
Posted by Barbara Brackman at 6:00 AM