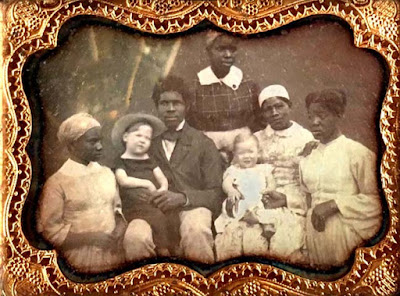 Beth sent this incredible photo from her family. She's descended from the boy in the wide brimmed hat, Jeremiah Morton Halsey (1852-1921.) His brother Robert Ogden (1854-1939) is the baby. Looking at Robert Ogden (called Ogden) we can guess the photo was taken the year after his birth in 1855. We can also guess the five older people were enslaved at the Halsey farm in Orange County, Virginia. 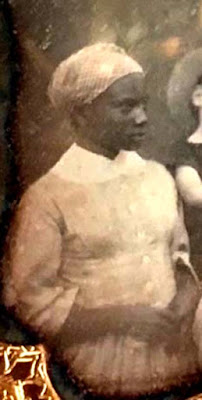 Girl, perhaps in her mid teens,
wearing a corset under her cotton dress.
Short sleeves would be typical work clothing.
I Photoshopped Beth's daguerreotype, taking out scratches and spots and improving the contrast.

And showed it to costume historian Lynne Zacek Bassett who was impressed by the dress the bareheaded woman on the right is wearing. Those flared sleeves were quite fashionable in 1855. The other dresses are more typical work clothing. Lynne also noted the women are wearing corsets. (Costume historians always notice the underwear.) 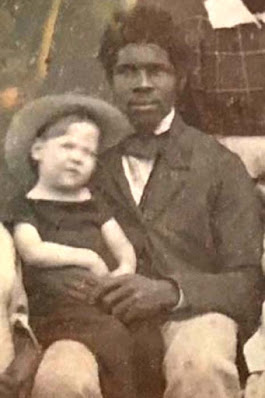 Could this be a wedding picture featuring the bride in the flared sleeves and the well-dressed groom holding Morton Halsey on his lap? 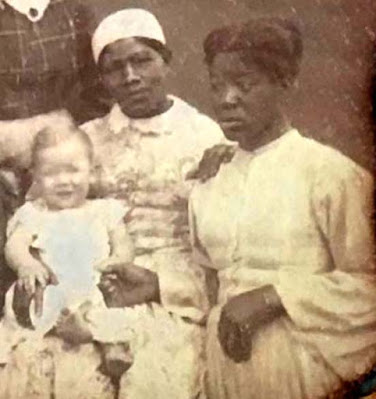 No one recorded the names of the Black people. Tracking them will be made easier by the
fact that Beth's family are keepers of family history. 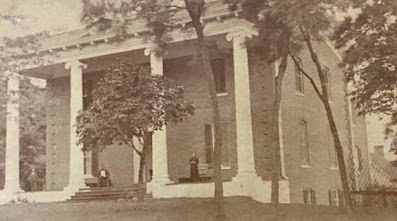 Family home in the late 19th century.
The boy's parents Joseph Jackson Halsey (1823-1907)
& Mildred Morton Halsey stand on the front porch.
The Halseys left a good deal of paper in that house, which the family has donated to the University of Virginia's Albert and Shirley Small Special Collections Library. Letters and a notebook kept by Mildred during the Civil War have been studied by historians and quoted in many books. One hopes a researcher could find references to slaves who lived there and connect them to the portrait.
Joseph Jackson Halsey was born in New York and attended Princeton University. After graduation he emigrated to Virginia to teach and in 1845 opened a school the Fredericksburg Classical & Scientific Athenaeum. He soon married the only daughter of a well-to-do US Congressman who owned 21 slaves according to the 1850 census. Joseph adopted the Southern planter style life and fought for the Confederacy during the Civil War. 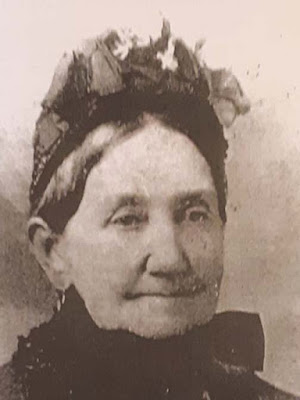 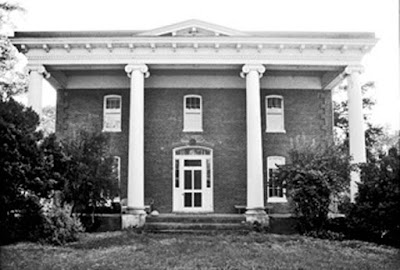 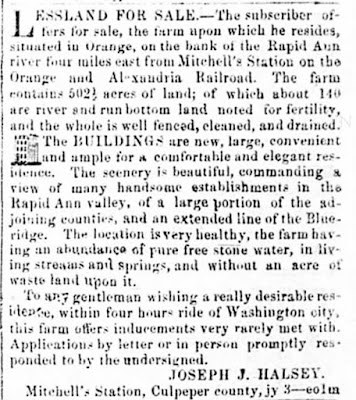 Joseph tried to sell the place in the summer of 1860 to "any gentleman wishing a really desirable residence [on 500 acres], within four hours ride of Washington city." The times were unstable. He kept it.

Numbers of enslaved people were tallied in the 1850 and 1860 censuses (each male slave counted as 3/5th of a man in apportioning population for political purposes) but no names were recorded. Joseph Halsey was listed with three people in 1850 but the 1860 census just before the war records 17, showing his accumulating wealth from his law practice and his plantations.
Looking for corresponding ages in the slave schedules and the photo we find a woman who was 35 in 1850 and 60 ten years later. 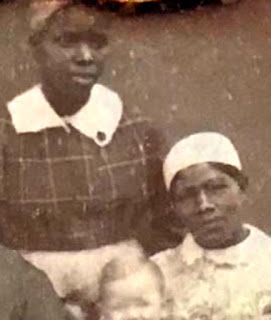 The seated woman does not look 60, perhaps she was only 45. The woman standing in the window-pane check dress looks to be somewhere between 16 and forty.---perhaps the woman listed as 35 in 1860 (#8 on the list.)

The actual census listings of 1850 and 1860 are no help. Only free people were recorded. Above the Halseys with their eldest child Fanny, two years old in 1850.

The 1860 census tells us a free man's worth:
Joseph owned $25,500 worth of real estate and $15,200 worth of other property
(mostly people.)
We learn nothing of any Black names---but the later censuses might offer some clues.

Here are the Halseys after the war in 1870, still worth $30,000 in real estate and $7,500 in other property. Four of their children are living at home with the youngest being Thomas born during the war. Morton is a student at the Virginia Military Institute. 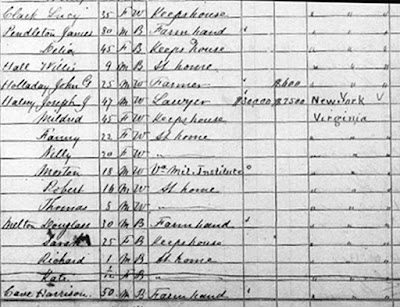 The clues are in their neighbors. Above Joseph's listing is John B. Holladay, a 25-year-old Black  farmer worth $600. Below Thomas's name is the Melton or Milton family, father Douglass (perhaps a nod to Frederick Douglass) and mother Sarah, parents of Richard and Kate. Douglass is a farm hand. Down the road is the Cave family (not the wealthy white Caves of Virginia) but the B for Black farmhand Harrison Cave who is 50 and appears to be unmarried. His large family goes into the next page. 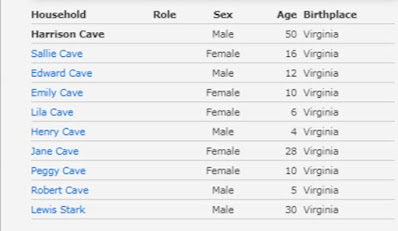 Were Douglass Melton, John Holladay, Harrison Cave and their families living in houses that were once part of the Halsey plantations? The same places they had always lived but where they had been invisible to census takers? 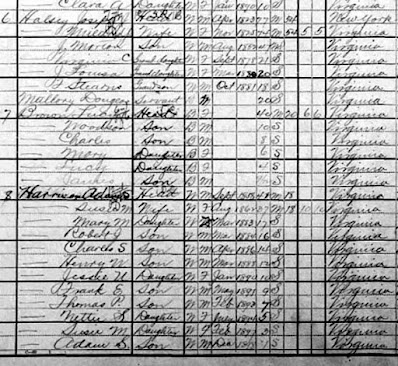 In 1900 the neighbors are different---Browns & Harrisons, but there is still a Black male named Douglas, 10-year-old Douglas Mallory who lives with the Halseys as a servant.
There are a lot of leads to follow here.
Joseph's advertisement for his school in 1845 from the Richmond Enquirer

The importance of one photo is immense!

I do hope the research discovers their identity. How enriching for their (those in the photo) families as well.

Can you find any wills? My ancestor's slaves were listed by first name in wills.