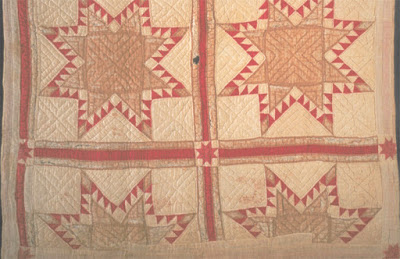 We have few quilts with accurate stories that enslaved seamstresses worked on them. Unfortunately many of the quilts with that pre-1865 history cannot be reliably dated to the years before the Civil War ended and slaves were freed. 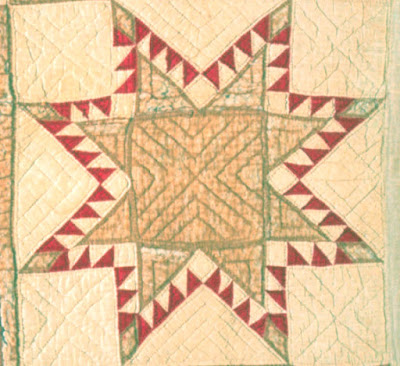 This feathered star quilt attributed to slaves at the Long Plantation in Upshur County Texas by the donor in 1979 is quite typical of Texas quilts in style---but typical of the years 1880-1930 rather than the 1840s-1865. 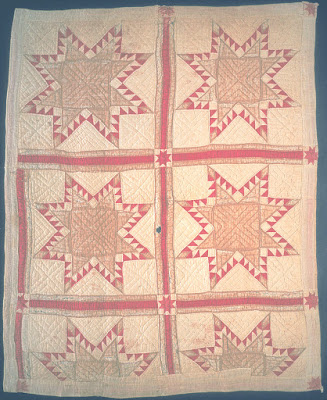 Their photo is difficult to see but a little light adjustment shows it to be a red (probably Turkey red) and tan quilt of five 28" blocks (one cut in half and pieced into the bottom), set with triple sashing and a star in the cornerstones. The sashing is extended to make a border but in some places the small star was not used. The quilting is utilitarian, primarily parallel lines echoing the patchwork; the batting looks thick and the quilting stitches (5 or 6 stitches per inch) are probably as small as one could do through the warm batt. 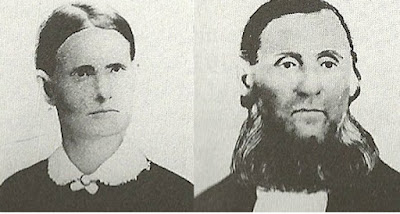 The donor was granddaughter of Matthew Smith Long Sr. She described him as an Irish immigrant who first settled in Tennessee where he acquired slaves which he brought to Texas in the 1840s to work on his 1,000 acre plantation in Little Cypress Creek in Upshur County. She did not mention her grandmother Elizabeth West Long who accompanied him. They must have arrived in the late 1840s. By 1850 Upshur County, about 80 miles west of Shreveport, Louisiana, had nearly 4,000 residents, nearly 700 of whom were slaves. Eastern Texas economy was based on corn, cotton and tobacco. Most of the enslaved workers were likely agricultural workers.

The 1850 census tells us something about the Longs. They married young; Elizabeth was 15 when her first child Nancy was born in Texas. Both parents are listed as being born in Tennessee with all their children being native Texans born after 1847. Were M West and ME West who lived on the adjacent farm relatives of Elizabeth?

Matthew Long's Civil War record as a Confederate soldier in Co. G, Terry's Regiment, Texas Cavalry also indicates he was born in Tennessee.
I did not find any slaves listed in the 1850 census but the 1860 slave schedule for Upshur County shows M.S. Long with 3 enslaved people.

The quilt came to the donor (Bonnie L. Carroll) from her mother who'd received it from her mother-in-law, presumably accompanied by the family story of it's slave-made history. She also wrote:


"The cotton filling in the quilt was raised on the Long plantation....When first made and even after I received it, [quilt] was green, red and white... the green has faded out [to tan]. You will find some machine stitching on the border around the quilt, my mother did this a number of years ago as it became worn from use..."

The green fading to tan is quite typical (unfortunately) of solid colors favored by Southern quiltmakers after 1880. Bonnie Carroll remembered that the tan was once green but did not say whether washing, light or just age deteriorated the color. 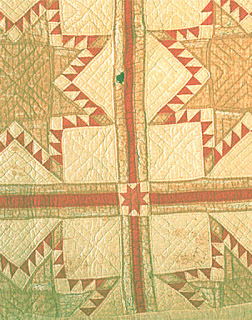 Another style characteristic that dates the Long quilt to after 1880 is triple strip sashing, a fashion throughout the South seen in variations below from east Texas quilts dating to the late 19th and early 20th century. Turkey red was a popular choice. 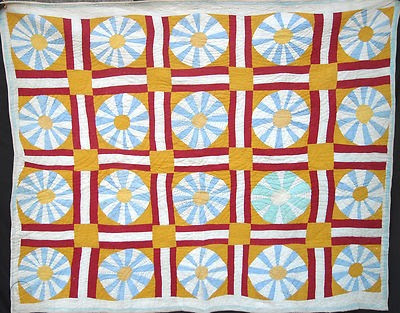 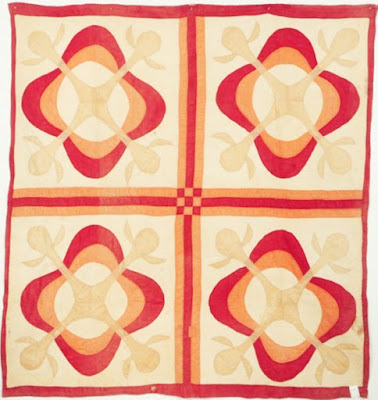 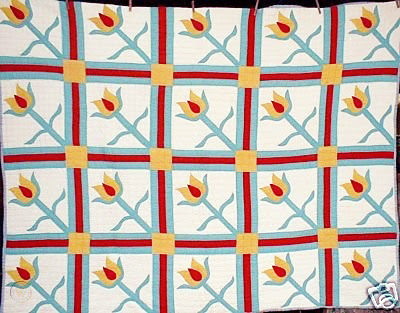 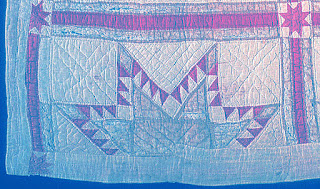 A white strip seems to have been added over
the half stars---perhaps the machine stitching mentioned
in the caption.

The caption also wonders if the edges haven't been cut down, as explanation for the partial blocks along the edge but that is also a Southern quilt style characteristic often seen after 1880. 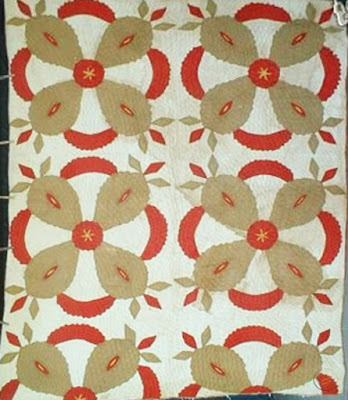 Five blocks cut to fit a rectangular format in fading green and red,
east Texas, after 1880. This was a deliberate setting format, often seen.

All in all the feathered star quilt appears to date to about 1900. It possibly could have been made by Elizabeth West Long who lived until 1905 or by one of her daughters or daughters-in-law.

We certainly need a history of African-American quiltmaking but an accurate history. Serious attention to corroborating evidence in fabrics and style would help develop that history.