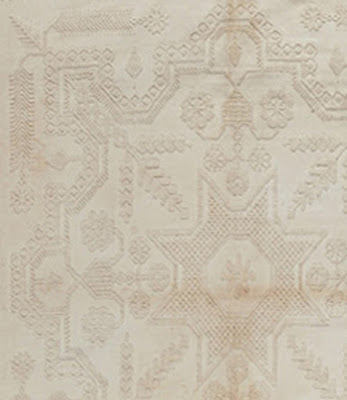 The Speed Museum in Louisville, Kentucky owns this
white work bedcover, which looks to be done in what we
might call candlewick embroidery. 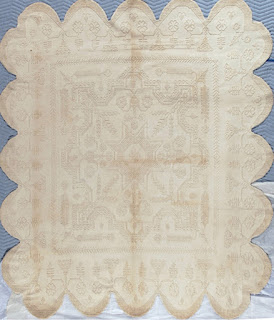 The J.B. Speed Memorial Museum in its first incarnation in
the late 1920s.

The museum is a memorial to James Breckinridge Speed, Lucy Breckinridge's nephew and foster son, created after his death by James's wife Hattie Bishop Speed. 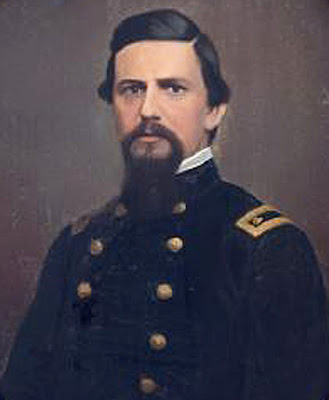 Lucy's brother William Pope Speed and wife Mary Ellen Shallcroft Speed were living in Boonville, Missouri when James was born. His mother died soon after and James went back to Louisville to be raised by his Aunt Lucy and Uncle James Douglas Breckinridge who had no other children. 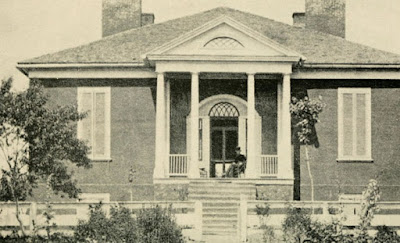 Lucy and brother William were raised at Farmington, a Louisville plantation on over 500 acres,
centered on a Federal style house believed to have been designed by Thomas Jefferson. The large Speed family had many distinguished members, among them Joshua Speed who went to Illinois in the 1830s to open a store where he befriended lawyer Abraham Lincoln. 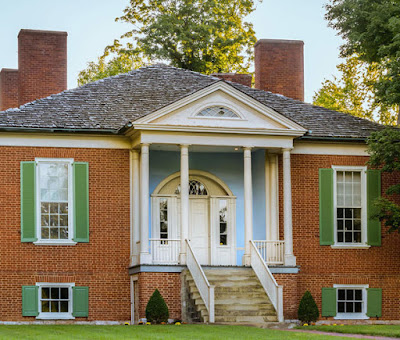 Joshua Speed returned to Kentucky to manage Farmington after a few years in Illinois. Lincoln in one of his depressions, paid a restorative visit there in 1841 where he observed slavery at close hand and formed his opinions. 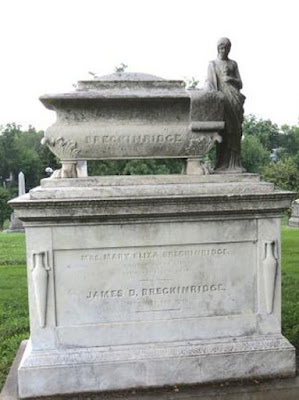 Uncle James (1781-1849) is buried with his first wife
Mary Eliza Grayson. Lucy's thoughts on this are not recorded.

Uncle James died when his namesake was about 5 and Lucy raised him in her extended Speed family.

While in his teens James went to Chicago to clerk in a bank. The Filson Library owns letters from him including one to Aunt Lucy in September, 1861 a few weeks before Abraham Lincoln's election and the beginning of Southern secession. Worried about unrest in Paducah, Kentucky among other places, he feared the times were "likely to result in civil war." He also thanked her for "a box she has sent containing a quilt, books and food."

One could hope that quilt was in the collection of the
Speed Museum but the only textile connected to Aunt Lucy
is the whitework bedcover.

The Speeds were ambivalent about slavery, profiting from the labor of dozens of people who worked in their hemp fields and farm yards yet a few years after Lucy's father died in 1840 Lucy and her mother emancipated Rose, Sally and Sally's son Harrod. 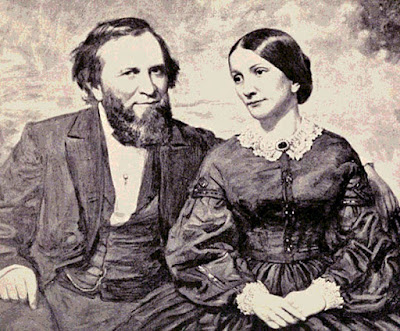 Photo of a painting by George P.A. Healy, 1864
Joshua Speed  (1814-1882) was courting Fanny Henning in
Louisville during Lincoln's visit

Joshua was a supporter of the system, acting as a broker in Louisville, hiring, buying and selling people. He and Lincoln disagreed on the point and might have debated it on their return boat ride to Illinois. Writing to Joshua's half sister Mary, his "crony at Farmington," Lincoln mentioned a troubling experience on the boat watching twelve men who'd been sold away from their families, headed for terrible duty further South. They were "chained six and six together.... strung together precisely like so many fish upon a trot-line." Yet they "danced, sung, cracked jokes, and played various games with cards...[How is it that God] "renders the worst of human conditions tolerable...?" 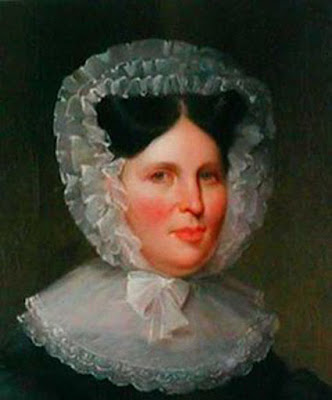 Lucy's mother Lucy Gilmer Fry Speed (1788-1874)
born in Virginia after the Revolution lived a decade after the Civil War.

Despite their participation in the slave economy the Speeds were pro-Union. Lucy's nephew James Breckenridge enlisted at about 18 in Kentucky's Union Army. He eventually fought under Sherman in Atlanta and Knoxville.

Lucy & Joshua's brother, another James Speed (1812-1887) was U.S. Attorney General in Lincoln's Presidential administration and the Speed family was important in keeping border state Kentucky nominally in the Union during the Civil War. 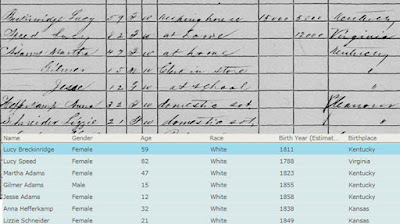 The 1870 census shows Lucy and her mother Lucy still had
assets; both owned land. Their resident white servants  (Irish women
during the Civil War years) are now young women with German
names and German birthplaces (not Kansas as the interpretation of
the handwriting tells us.) 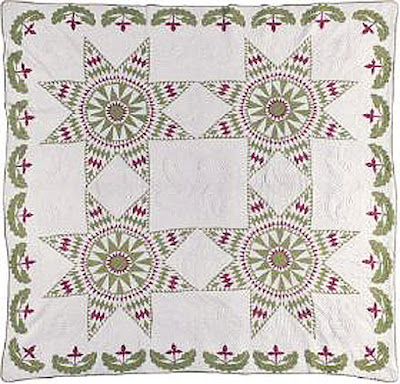 The Speed Museum has many quilts, most from Kentucky. This extraordinary feathered star by Sarah Jane Henderson Means 1826-1924) of Louisville is a favorite.