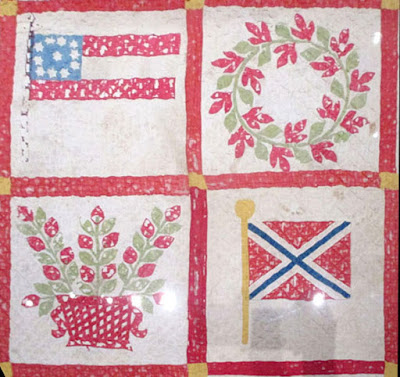 This appliqued quilt with two Confederate flags was shown at the Pasadena California History Museum. I found the photos online, probably snapped by a viewer without a lot of space to frame it in the camera or to eliminate the glare from the display lights. 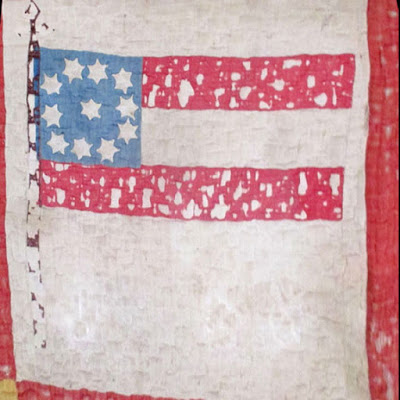 At least, they appear to be Confederate flags.
Eleven stars to represent the 11 Secessionist states in three stripes. 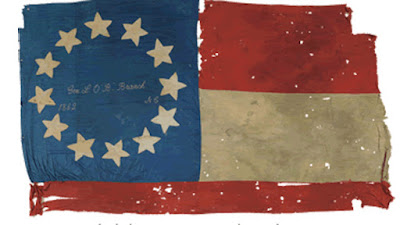 Fragment of a 12 star flag although there were never 12 Confederate states.

The details show how badly the Turkey red plain cotton has deteriorated. 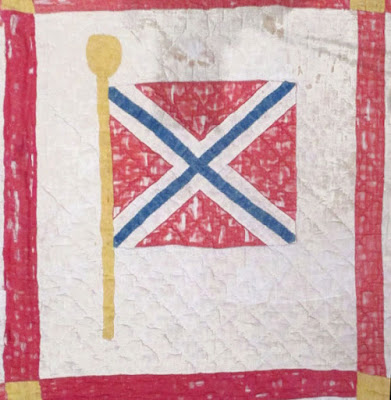 This calls to mind the best known Confederate battle flag?
I did some photoshopping to square up the photos. 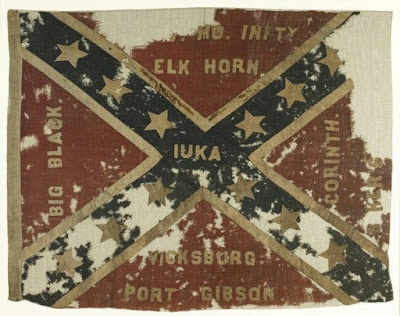 Missouri battle flag.
The flag above might be a version of this common image. 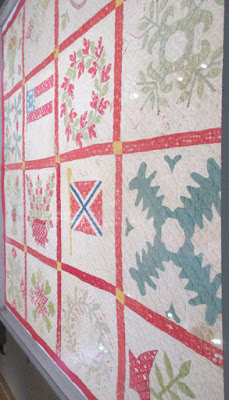 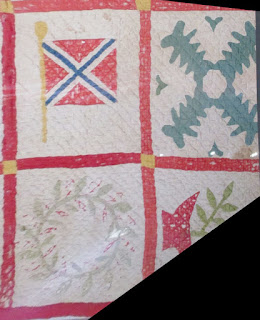 The 14 other squares are rather conventional applique,
popular at the time, several wreaths and  florals. 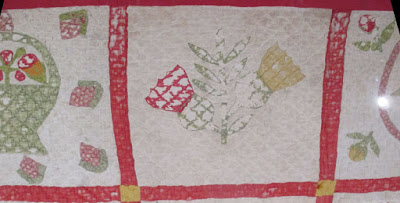 The quilt is inked on one block:
George Anson Stocking

It does not look like a Southern applique sampler at all---my first
guess would be 1860s New York, New Jersey or New England!
But two Confederate flags! 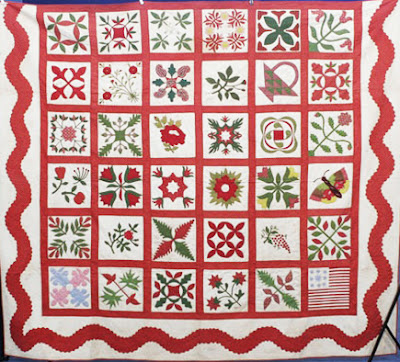 It is rare to come across any mid-19th century surviving quilt with Confederate flags.
This one with similar red sash a floral blocks was shown on Antiques Road show,
dated 1863 from Medford, New Jersey. 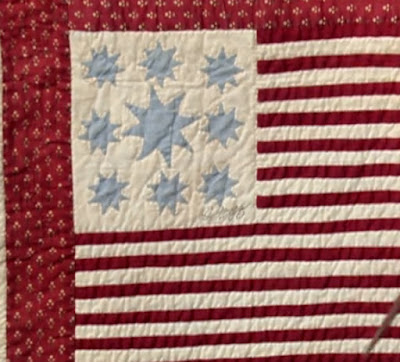 With a nine star flag---flags often included all the stars that fit
rather than a symbolic number.
Numerous sampler quilts date to the 1860s during and after the war
but there is no Confederate association in the imagery.

Watch Titi Halle discuss the above quilt here with a descendant:
https://www.pbs.org/video/antiques-roadshow-appraisal-american-album-quilt-ca-1863/ 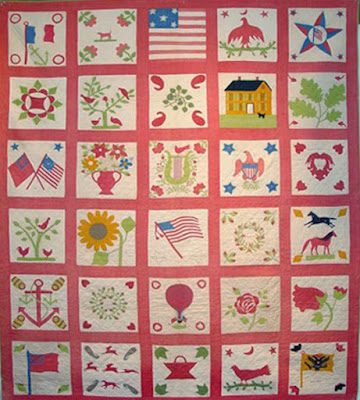 1) Horses
2) Hearts & other simple images in the block corners

John Beckendorf, the owner who loaned the Stocking quilt for display in Pasadena, is a collector of Civil War artifacts. Beckendorf notes that 2nd Lt. George Anson Stocking (1843-?) was a Lieutenant in 14th Connecticut Infantry. His descendants have his letters with snippets online. (He died sometime in the early 20th century.) 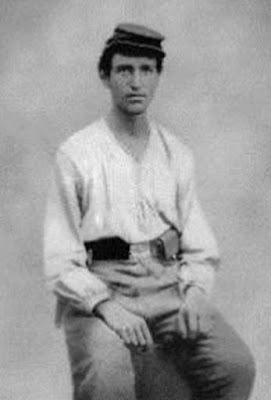 George Anson Stocking, old enough for the
Union Army in 1862
Portraits from the University of New Mexico site.

Anxious to fight he ran away from home at 16 to join a regiment before the war, apologizing to his mother for "the mean and ungrateful way" he'd disappeared.

At about 19 he enlisted in the "Nutmeg Regiment," served in 23 battles and was wounded twice. 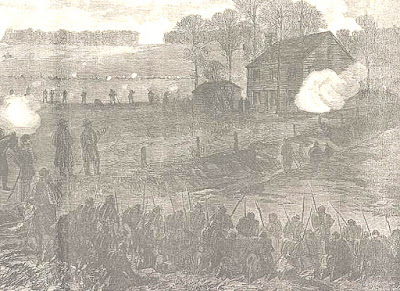 In May, 1864 he fought in Virginia's Battle of the Wilderness where he was wounded and is reported to have acquired this quilt. Beckendorf believes it to have been made by an unknown maker for a Southern sympathizer and that when Lt. Stocking acquired the quilt he inked his name on a block and took the quilt back to Connecticut with him as a souvenir. 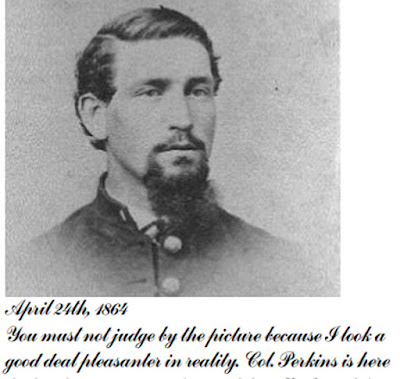 The quilt is certainly a puzzle. Could friends or family in Waterbury, Connecticut have made this quilt for George Stocking, inking his name on it---a very common thing do do for the recipient? His mother Susan A. Stocking [sic? Sarah A. Frost Stocking] offered early to send him his guitar and "father's large cloak in the garret...to wrap yourself in at night when it is very cold." 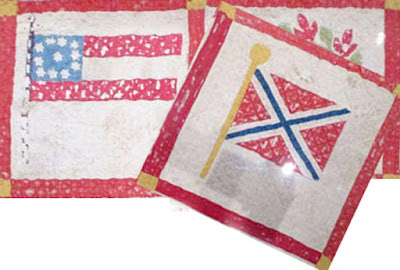 Once safely home George married Annie Herbert Dearth (18148-1917) in 1869 and they had three children in the 1870s. He was a tool and dye cutter and became Superintendent of Glastonbury's Williams Brothers Silver Company. 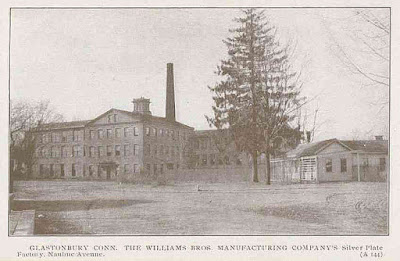 Read excerpts from George's letters home here at the University of New Mexico:
http://www.unm.edu/~ulinski/images/Heritage_Dec2012/GeorgeAnsonStocking-ConnecticutYankeeGoesToWar.pdf
Posted by Barbara Brackman at 6:00 AM

I wonder if the flags were mixed to represent family members living far and wide and so appears to be a neutral territory quilt?
I enjoyed reading the letters, thank you. :D