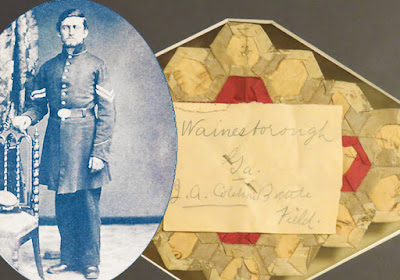 Vicki Wendel called our attention to this little piece of
patchwork in a museum in Minnesota, far from Waynesboro, Georgia. 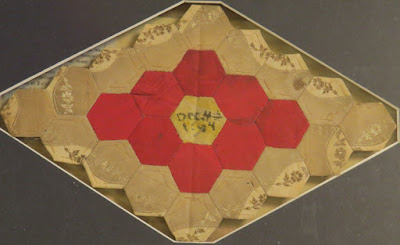 It's silk hexagons with a rather crudely inked date of December 4, 1864, probably not the date it was made but the date it was acquired on a battlefield in Waynesboro. The Battle of Waynesboro, Georgia (December 4 &5, 1864)  was one of many between Confederates and Sherman's Union troops on their "March to the Sea" after the capture of Atlanta a few weeks earlier. 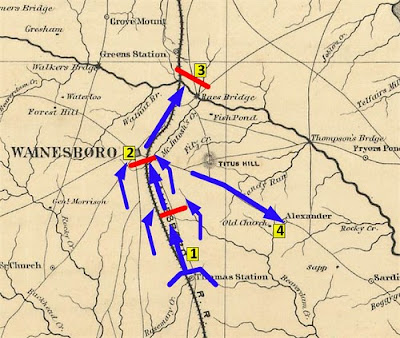 Waynesboro, south of Augusta, Georgia is not far
from the Georgia/South Carolina border. 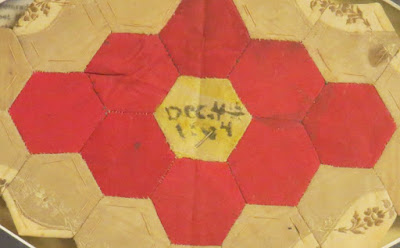 James Allison Colehour (1842-1938) seems to have taken a battlefield souvenir and saved it all his life. 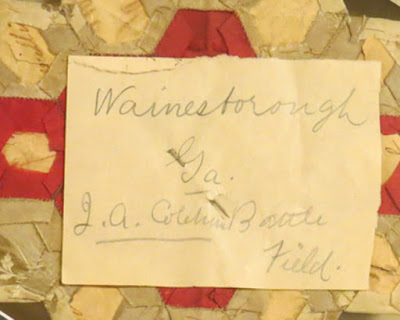 There are many ways to spell Wainesborough. The silk scraps
are pieced over paper hexagons perhaps cut from letters.

James was one of six brothers and a sister, originally from Pennsylvania, whose family migrated to  Mount Carroll, Illinois in 1854. When the Civil War began James and David Colehour joined the 92nd Illinois Infantry. James served in Company 1 under General Smith D. Atkins. 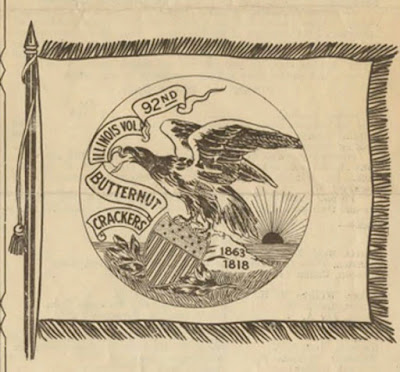 The "Butternut Crackers"
From a 1921 reunion that James attended 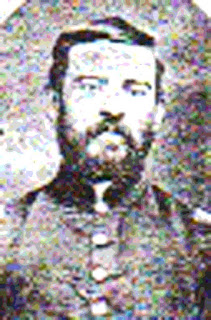 Both David and James were hospitalized with typhoid fever in a Nashville hospital in the spring of 1863. Lt. David Colehour died in March at 24 years old. 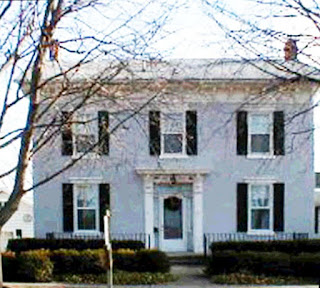 Their eldest brother Hiram Supplee Colehour came down to retrieve David's body and visit a very ill James. Hiram caught typhoid himself and died in May at 31 years of age, leaving a wife with six children.
http://genealogytrails.com/ill/carroll/carrollfamilycolehour.html

This all must have been an unimaginable series of disasters for their mother Hannah Richards Colehour (1805-1897) who had lost her husband Henry a few years earlier. Another son Isaac died at the end of the year.

James survived and rejoined his unit. He fought at the Battle of Chickamauga in September, 1864 where he was shot in the shoulder, one of three wounds he received in the war. But by December he was back with his regiment at the Battle of Waynesboro.

The surviving Colehours seem to have been made of strong stuff as mother Hannah lived to be 94 and James to 96. But after the war James was advised that the Chicago atmosphere was too much for him and he moved with many in his extended family to the resort town of Battle Lake, Minnesota up near Fergus Falls. He and his wife built a large house there in the 1880s, a hotel for summer visitors.

James collected numerous items and was averse to tossing them out. With a large house he didn't really have to. Prospect House and its contents remained in the family. Great-grandson Jay Johnson was thrilled to find letters, diaries and all manner of souvenirs in the house, including this piece of patchwork. Johnson opened a Civil War Museum in Prospect House.
http://www.prospecthousemuseum.org/index.php

Someone in Georgia lost a piece of patchwork in 1864. Vicki tells us that the museum indicates James "took the block from a house as a souvenir of his being there. I doubt he had permission, so I guess 'theft' would be a fair description." 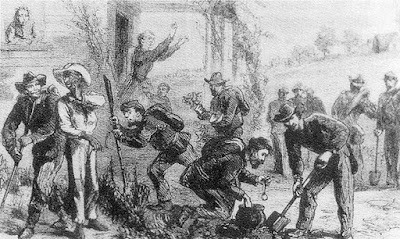 Union soldiers finding the buried silver spoons with a little help
from a former slave.

Was the block a theft? Stolen? Stealing implies stealth but it's likely there was no sneaking around the Georgia house. Perhaps a more accurate description would be plundered, pillaged or looted. General William Tecumseh Sherman's army, to which James belonged, was notorious for ransacking Southern homes and plundering valuables. Soldiers were encouraged to "forage liberally on the country during the march."

Southern history of the end of the war still echoes with tales of Sherman's army's cruelty as if it were plain meanness or just bad manners to treat civilians so. We should not miss the point --- and Sherman had a point to make. He was an innovator of the "scorched earth policy," a systematic terrorizing of the civilians so they would demand an end to the war.

"He sought to utilize destructive war to convince Confederate citizens in their deepest psyche both that they could not win the war and that their government could not protect them from Federal forces," according to a post at Battlefields.org. Read much more about Sherman's March:
https://www.battlefields.org/learn/articles/scorched-earth

"War is hell," as Sherman said.

I do enjoy the scholarship and research so evident in all your posts, but found your slant on Sherman's "strategy" quite disturbing.