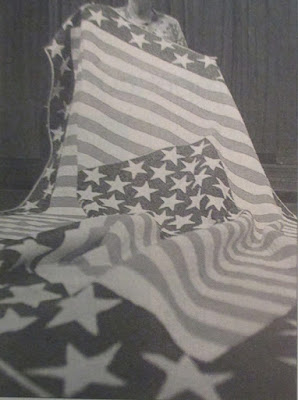 Several years ago our local newspaper featured this photo of a flag quilt owned by a woman who had inherited it from her great-grandmother. The pattern is the Peterson's Magazine Stars & Stripes Bed-Quilt printed in color in the summer of 1861. 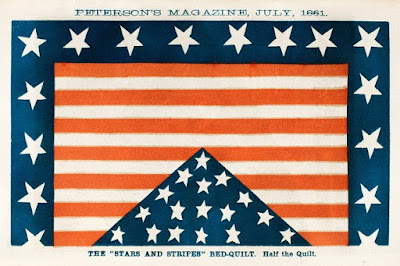 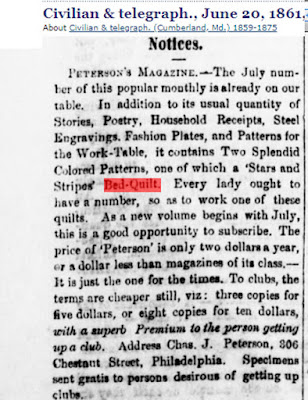 Ad for the magazine:
"Every lady ought to have a number, so as to work one of these quilts."
Many women did.

The family story:
The quilt was "made by Lydia Frances Dilliner a teen-ager who grew up in a Union-supporting family in Point Marian, Pa., near the Mason-Dixon line. She was about 17 to 19 years old when she made the quilt. It was 1858 to 1860." ....During the Civil War, the Confederates were coming up into the vicinity. The family hid the quilt in the loft so the Confederates (wouldn't know they were) Union supporters." 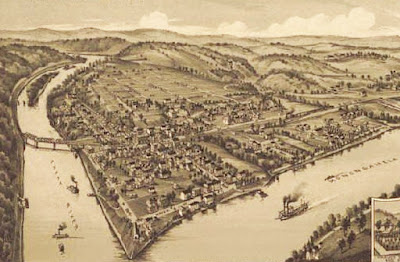 Lydia Frances had to have made the quilt after 1861. Born in 1842, she was about 19 when the pattern inspired her. At the time she was living with her parents Ambrose and Elizabeth Dilliner in Point Marion on a farm on the Monongahela River in southwestern Pennsylvania. Western Virginia, which became the state of West Virginia in 1863, is south of Point Marion. 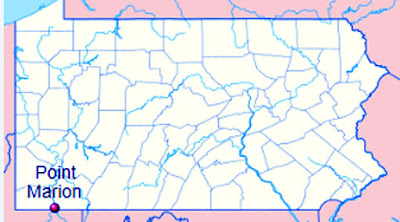 She had three sisters and two brothers. In 1868 she married farmer James Estep Sturgis and raised three children Leonard Ross, Carrie and Elizabeth. James lost two brothers during the Civil War. David died on May 29, 1862 in Baltimore and Phineas died four days later in Yorktown, Virginia.

James E. Sturgis "has pronounced opinions...and can well express them." 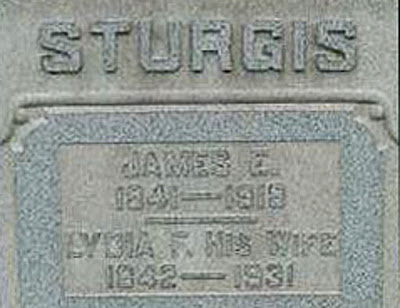 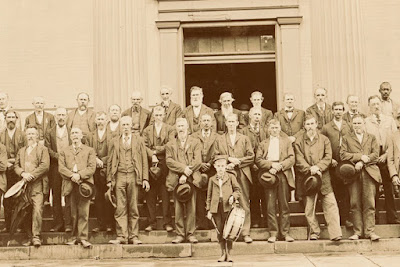 How great that the quilt descended in their family in such good condition.
Posted by Barbara Brackman at 6:00 AM

Fascinating history. I wonder if anyone has the pattern still that it could be made? Not by me but someone much more talented! LOL!

The pattern was published in the July 1861 edition of Peterson's Magazine and consists solely of the color illustration of one-half the design that Barbara Brackman included in this blog post. There are no other directions or cutting instructions as to sizes or templates for the stars. I am surprised how large the quilt is.

The Smithsonian institution also has a Peterson's Magazine flag quilt with this description: "This Stars and Stripes quilt was made in 1861 by Mrs. Mary Rockhold Teter of Noblesville, Indiana, for her son George, who served in the Union army during the Civil War. In the center is a thirty-two-inch blue square set diagonally on a field of fifteen red and fourteen white 2 1/2-inch stripes with a 6 3/4-inch blue border. Thirty-four white stars are appliquéd on a blue center, and the same number on the border, representing the number of states in the Union from July 4, 1861, to July 4, 1863. The date 1861 is quilted on one of the center stars. Some of the stars in the lower left corner of the border are quilted “Ab Lyncoln,” “Abe,” “Scott,” “Butler,” and “Genral Lyon.” The pattern for this quilt was published in Peterson’s Magazine in July 1861."

Sorry, I can't figure how to add the illustration. I found this at: http://www.civilwar.si.edu/life_unionquilt.html

Amazing! Adding this to my list of future quilts to make. Thank you for sharing :)