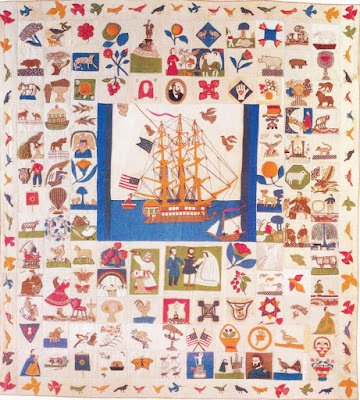 Quilt top known as the Constitution bedover, although that ship
may not be the USS Constitution. 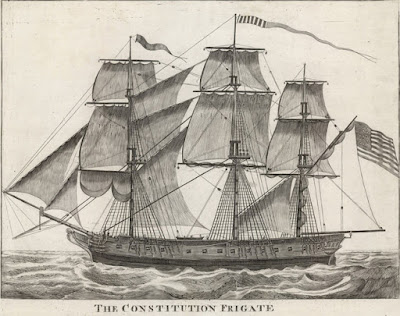 Early-19th century print of the Constitution 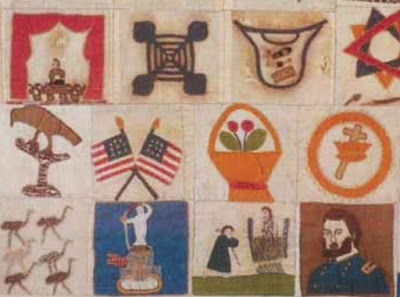 The top has 111 pictorial blocks, many of which, like the apron in the top row in the detail above, refer to Masonic imagery. 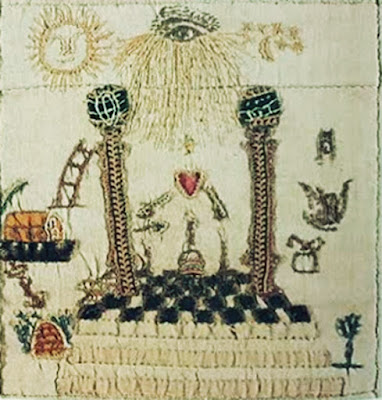 Masonic symbols, showing the embroidery on many of the blocks 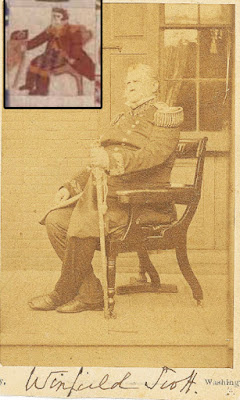 Several blocks picture what look to be Union generals,
perhaps copied from the collectible CDV cards at the time.
One could spend some time trying to place these portraits.

And then there is the ship in the center: See last week's post:
https://civilwarquilts.blogspot.com/2019/07/the-constitution-quilt-what-ship-is-it.html 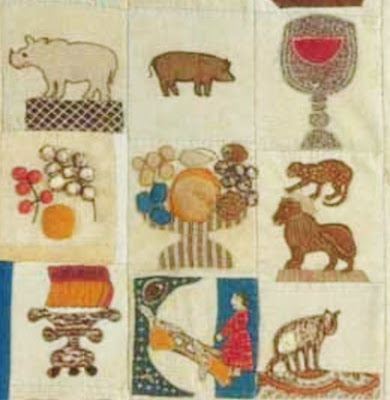 Sleeping Jacob is in the lower center here

In her look at the piece in Wrapped in Glory: Figurative Quilts and Bedcovers, Sandi Fox noted a block with Biblical and Masonic meaning, a sleeping Jacob, writing,  "The bedcover is in a reconstructed form, and the block's original positioning" [was probably rotated so the red clad figure is lying on the ground dreaming of Jacob's Ladder to heaven]. 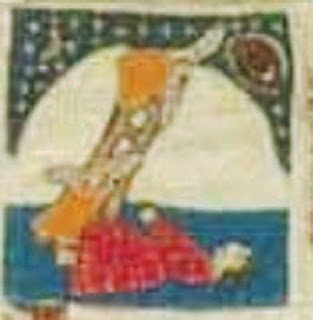 Jacob's Ladder is an interesting topic in quilt iconography but wait a minute: "The bedcover is in reconstructed form...." 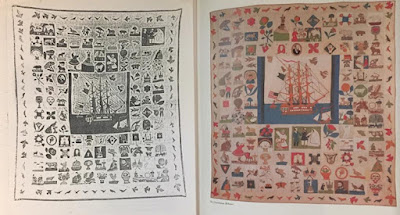 Well, I knew that and so did Merikay Waldvogel. About 1990 she and I and our good friends Joyce Gross and Cuesta Benberry spent a delightful day with photographs of two quilt tops and some scissors. We thought the two quilts with a ship in the center were two different quilts. We decided to figure out how many blocks they had in common. 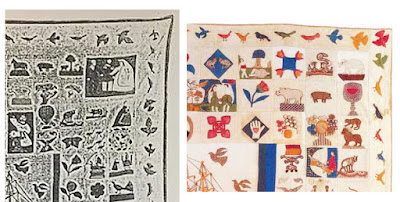 After cutting up and sorting the pictures of about 80 of the 111 blocks we realized they had every block in common. These were the same blocks arranged into two different compositions at two different times. 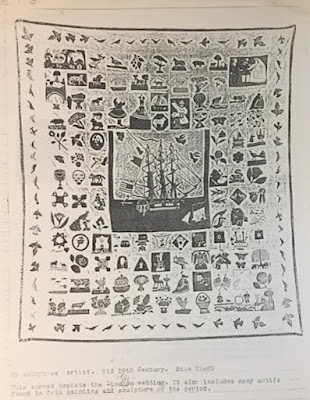 All we have to remind us of the older quilt is this photocopy from Joyce's
collection.

The typed caption:
"By anonymous artist. Mid 19th Century. Size 72 x 62
This spread depicts the Linclon [sic]wedding. It also includes many motifs found in folk painting and sculpture of the period."

We don't have a source for that black and white photo. I recall that it may have been an exhibit at William and Mary College, but Merikay remembers no such attribution. Joyce and Cuesta are no longer with us to correct our recollections (too bad for us in many ways.) 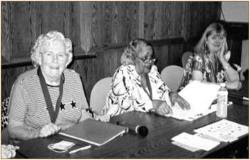 This is a thirty year old mystery in my files. Who cut up the original top and why? And who re-connected them? And if you will look at last week's post---what ship is in the center?
Posted by Barbara Brackman at 6:00 AM

I love this history, and the quilts, and your memories. General Winfield Scott was famous for the Mexican American War, and later for the early Civil War. Wonderful to learn about those cards!