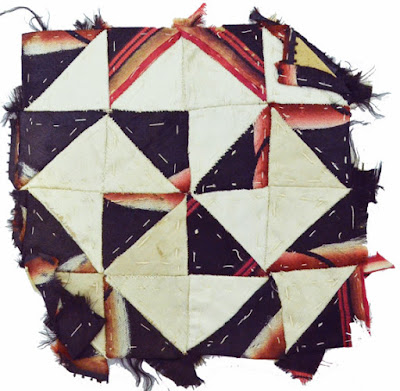 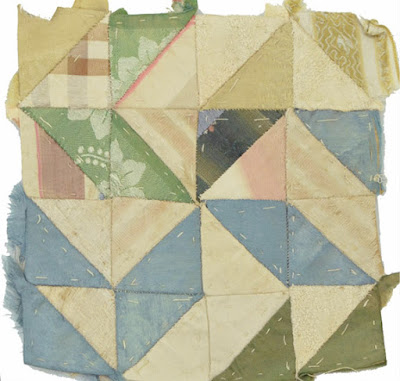 These two patchwork blocks are attributed to Fanny Ross Riley Rowley (Possible dates 1831-1913). It's not clear how the museum has determined the year, but there may be dated papers on the back. 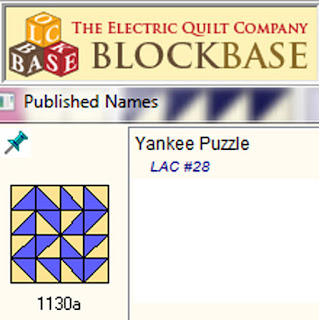 The lighter block design was published as Yankee Puzzle by the Ladies' Art Company at the end of the century. The black, striped silk block has no popular name. 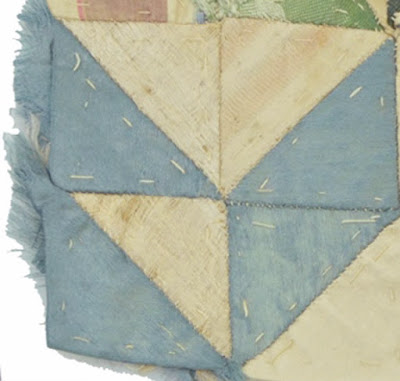 The fabric looks to be silk. Triangles are pieced over paper, first basted and then whipstitched together, arranged in two different patterns of 16 HST squares, a common technique in North America and Great Britain at the time. 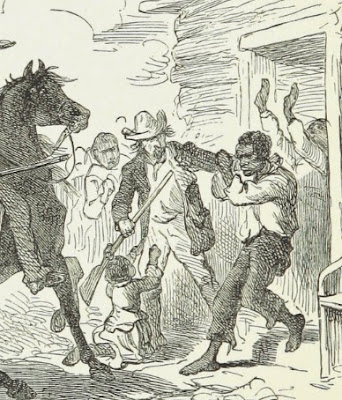 The story associated with the blocks is that Fanny pieced them during the Moseby Incident of 1837, also known as the Niagara Court House Riot. Solomon Moseby escaped from slavery in Kentucky and headed north to Canada, where he found a temporary refuge. His former owner David Castleman of Fayette County, Kentucky tracked him to Upper Canada and Moseby was jailed before awaiting his return to slavery. 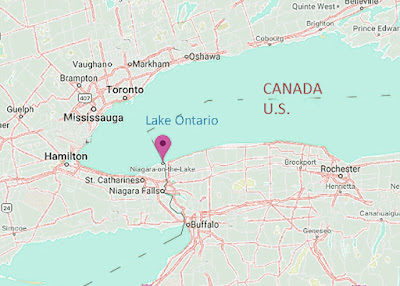 Niagara on the Lake (Ontario) is just across the Canadian border
north of Buffalo, west of Rochester 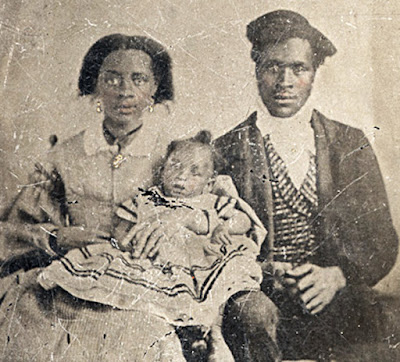 Young Canadian family from the Archives of Ontario

Read about the blocks here:
http://www.narrativethreads.ca/explorer-explore/patchwork_de_1837-1837_patchwork.html 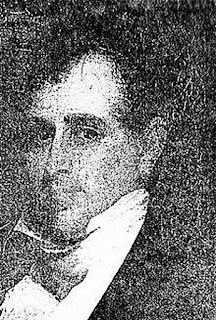 David B. Castleman
1786-1852
Castleman sent bounty hunters to
Niagara while he waited in Lewiston, Canada

A group of resisters refused to let the Kentuckians take Moseby away, camping for two weeks around the courthouse and blocking any attempts by officials to enforce the law. A petition went to the Lieutenant Governor, signed by 131 citizens, 17 of them black. Many of the protesters were women.

Supposedly, Fanny stitched these blocks while she camped.

The confrontation came to a head in September when protesters and officials clashed. The sheriff ordered the soldiers to fire, leaving two black men dead and Solomon on the run again. Killed were Herbert Holmes, a minister, and Jacob Green, who tried to jam a tree limb into the wagon wheels. 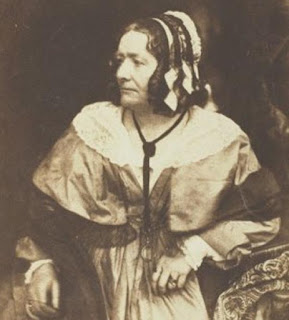 Anna Brownell Jameson published a travel book the following year. Winter Studies and Summer Rambles in Canada tells the tale as she heard it. 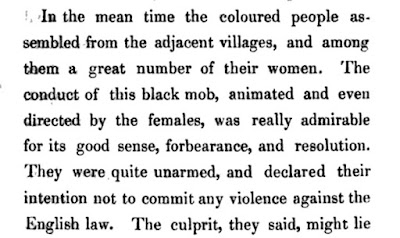 "Coloured people assembled from the adjacent villages, and among them a great number of their women. The conduct of this black mob, animated and even directed by the females, was really admirable...."

Jameson met one of the young women who led the protest. Sally Carter about 25 years old, had  "a kindly animated countenance; but the feelings of exasperation and indignation had evidently not yet subsided." A runaway from Virginia she had believed "nothing could touch us here, on your British ground, but it seems I was mistaken, and if so, I won't stay here." 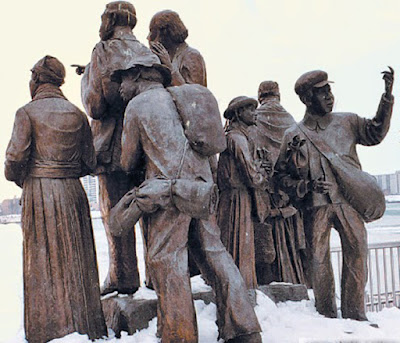 
Bronze sculpture by Ed Dwight at
Hart Plaza in Detroit, recalling the passage to Canada.

Moseby eventually made it to freedom in England and returned to Canada later in life. 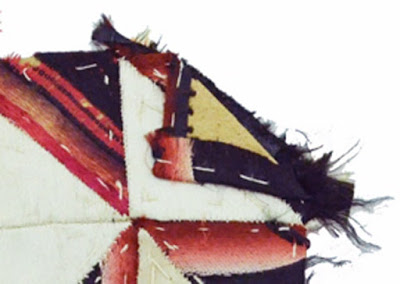 Were the blocks made by Fanny Ross Riley Rowley? The daughter of William and Fanny Riley (William was born a slave in Virginia) would have been six at the time of the protest. This was the kind of patchwork a young girl would have learned to stitch but whether she was camping with the adults is impossible to know. 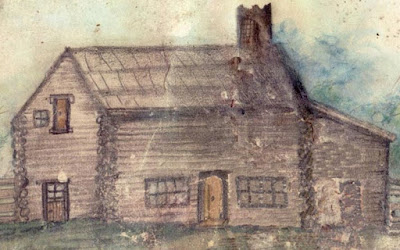 Late 19th-century sketch from memory of the Riley home

The 1851 census lists three Fanny Rileys in William's home in the city's "Coloured Village" framed by King, William, Ann and Butler streets. Wife Fanny was 57, daughter Fanny, 20, and granddaughter Fanny, 3. The middle Fanny born around 1831 is a likely candidate, although her mother born about 1794 is also a possibility. The elder Fanny was born in Germany and married in 1818, probably arriving in North America as an indentured servant. 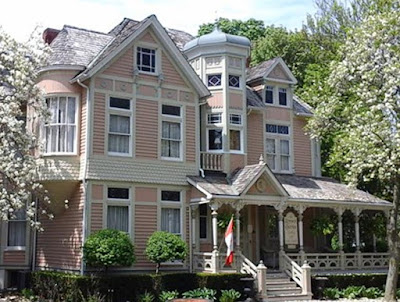 The middle Fanny prospered in Niagara on the Lake. Husband Samuel B. Rowley, a Philadelphia glass manufacturer, built this Victorian mansion at 177 King Street that still stands, according to local history. 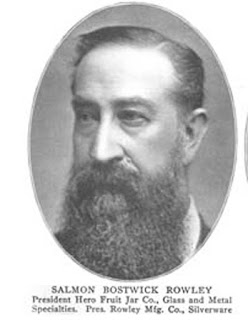 From King's Notable Philadelphians in 1902

I wonder if her husband is not Salmon Bostwick Rowley, President of the Hero Fruit Jar Company of Lockport, New York who patented glass preserving jars.
See more about this guy here:
https://sha.org/bottle/pdffiles/Hero.pdf

But that's a genealogical rabbit hole and we are supposed to be discussing QUILTS. 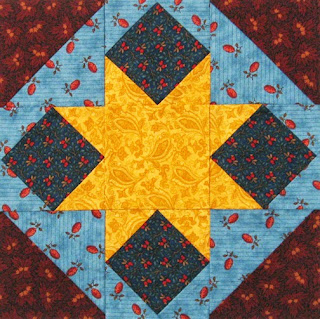 See a post on a similar protest in Detroit, Michigan with a Canada Star block of new design:
https://civilwarquilts.blogspot.com/2014/04/threads-of-memory-4-canada-star-for.html

The blocks, like many small fragments of women's work, help us recall the lives of people almost forgotten. 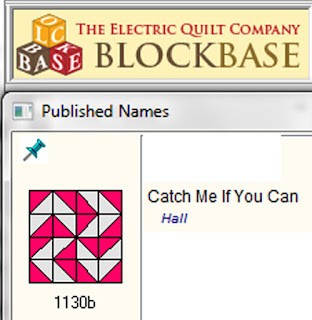 Coincidentally Carrie Hall named a variation of the block at the top of the page
"Catch Me If You Can.".... Perhaps the perfect block for an Underground Railroad,
with some underpinning in fact.

Both fascinating and mysterious.

LOVE reading the history you find as you research. IF you have found a quilt block that represented the Torrey political leanings of the American Revolution I would be interested in hearing more about it. There is a Whig Rose for those who wanted to withdraw from Britain. Way back my Great Great… grandparents decided to be Torrey and moved to Canada. A couple generations ago some of the family moved south and west to WA state. I would like to make at least ONE block representing the Torrey side for a wall quilt, if there is such a block. Thank you.

Wow! I've been to Niagara on the Lake a couple of times. Such a beautiful town (and a very yummy shop with fudge!) but I never realised what had been going on there many moons beforehand.
Had to smile at the title - hard to imagine Canadians being disobedient having listened to my relatives "argue" - very calm and agreeing to differ LOL!

I remember piecing "catch me if you can" during your quilt along and am glad we didn't use papers!
This is a fascinating story and is quite humbling and inspiring to think of the people that stood up and gave their lives for this man.
Thanks for piecing together the fragments....pun intended. I live only 1 1/2hrs south of Niagara-on-the-Lake. It's a lovely town and I may go visit it again this summer and check out the museums up there.
I live near the south shore of Lake Erie and there are homes here that were used to hide runaways. Now you have piqued my interest in my own town. Thank you!

Apparently Niagara on the Lake has an important history. Go poke around Cheryl. And Kerry--maybe all those disobedient Canadians were US transplants.

Barbara, I continue to enjoy your posts and your sense of humor. I'm currently watching "Mercy Street" on Netflix which I somehow missed when it was originally aired on PBS. I currently live near Petersburg, Virginia, where some of this series was filmed. I'm enjoying the bed coverings, the men's costumes, and especially the Greene women's beautiful gowns. It ties in with your discussion of nurses and medicine perfectly. I've binge watched both seasons, and when not in my sewing room, will head out to the living room and start the series at the beginning again!
Much peace to you!