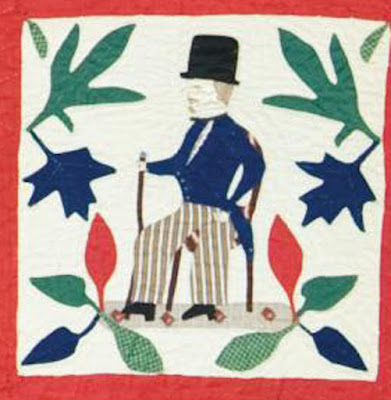 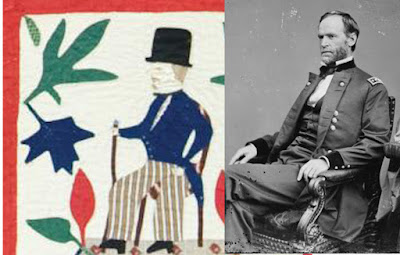 Honstain might have drawn her appliqued figure from the
1865 Brady Studio portrait of Sherman.

J.D. Dickey has a new book out Rising in Flames: Sherman's March and the Fight for a New Nation.
Since much of Civil War quilt lore recalls family stories of quilts stolen, hidden, or destroyed in Sherman's marches from Atlanta to Savannah (1864) and later north through the Carolinas (1865),  the book's facts about the campaign are relevant to any discussion of quilt myth and history. 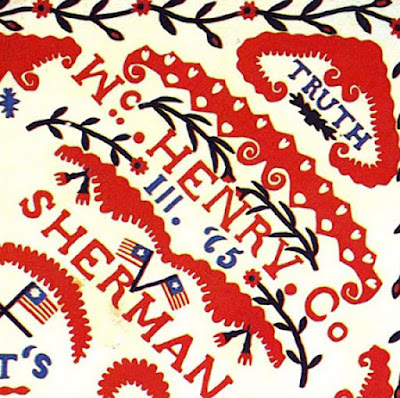 Detail of a quilt known as the Nunda Lodge Quilt
Collection of the Chicago Historical Society
http://civilwarquilts.blogspot.com/2018/03/its-old-abe-forever-nunda-lodge-quilt.html

Thomas Ricks reviewed Rising in Flames in the November 11th issue of the New York Times Book Review. Quote from that review:


"Sherman's march continues to be misunderstood. Contrary to what many Americans still believe, and some are taught, its violence was not indiscriminate. Rather, Sherman was quite precise in directing it against the property (but not the persons) of wealthy Southern die-hards whose assets had been large untouched by war. Nor was the campaign particularly bloody....But Sherman did achieve his goal of eviscerating Southern morale, both at home and at the front, where rebel officers realized that their families and homes were unprotected. By doing that, Sherman helped bring an end to the war."

I am looking forward to reading this view of the two campaigns "mainly through the eyes of soldiers and other participants, like nurses." 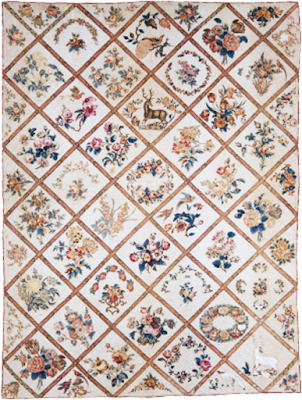 Mellichamp family quilt in the Kansas Museum of History,
taken by a Union soldier
http://civilwarquilts.blogspot.com/2017/10/a-southern-quilt-linking-north-and-south.html

Ricks's summary of the campaign against wealthy Southerners may be a useful distinction in sorting out which surviving quilts were impacted by Sherman's armies. 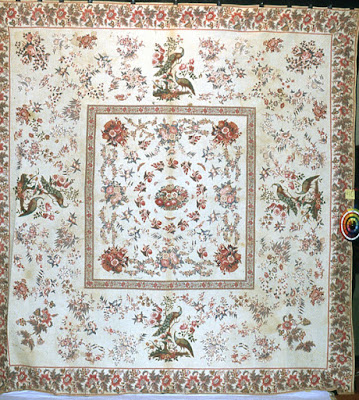 Southern quilt descended in the family of a Union soldier,
Arizona project & the Quilt Index
http://civilwarquilts.blogspot.com/2017/12/quilts-buried-with-silver-or-should.html

In general, more elegant quilts tend to be more accurately associated with tales of Sherman's march. The chintz quilts above reflect the assets of wealthy Southerners, household furnishings stolen or destroyed as revenge against "die-hard" Confederates."

Was the white stag in the lower right corner of the Mellichamp quilt printed white on the original fabric, or was it adapted from the brown stag in the upper left of quilt?

Do you know why the block we call Churn Dash has also been called several names associated with the Civil War, like Lincoln's Platform, Sherman's March and Ludlow's Favorite? William Ludlow was an engineer on Sherman's staff during the March to the Sea.

Mary---there were two of those stags---and the ghost version has torn away I think.

Don't know why the block would be called Sherman's March. It was certainly an iconic phrase when people were thinking up names for quilt patterns in the 1890-1940 period.
Still is.
Ludlow I'd never heard of. May be worth a post.