Military Memory in a Sampler 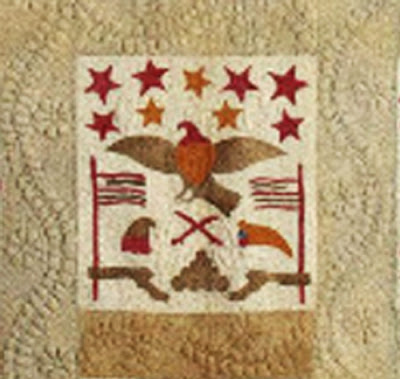 Eagle with cannons, a liberty cap and 9 stars,
block from a mid-19th-century applique sampler.
Mexican War or Civil War? 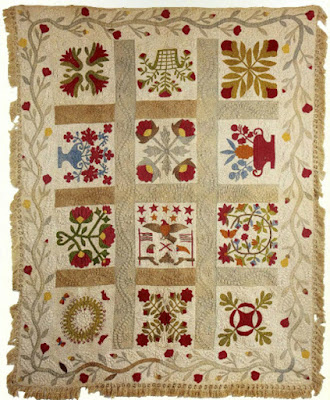 I've been collecting photos of applique samplers for next
year's block of the month. Here's one that seem to have
some Civil War imagery in a center block.
But then again it could be the Mexican War of the late 1840s.

All I know about it is that dealers Kelter-Malcé  advertised it about 30 years ago in a 1990 issue of
the Clarion/Folk Art magazine from the American Museum of Folk Art. 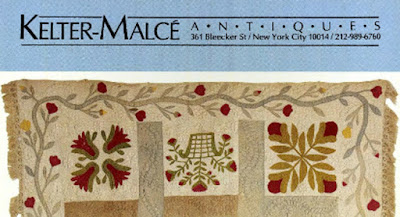 They sold a lot of great quilts and are still selling antiques in Bridgehampton, New York.
A recent profile:
http://easthamptonstar.com/Habitat/4/Home-Humor-and-Whimsy
Posted by Barbara Brackman at 6:00 AM

Hmmm, "applique samplers for next year's block of the month" ...

The red pulls me in every time. Add in anything Americana related and you have me. Love this sampler and the military block is fantastic.

Great post! Went down the rabbit hole of the American Folk Art Museum, delightfully read the article about the antique collecting and selling couple (love the fruit stickers on the woodwork in their kitchen)(and the giant baseball in their shop). Not only got my whimsical bone tickled but got a creative boost as well! Thank you!

And, oooh, "gathering applique samplers for next year's block of the month", wonderful!

I put a little wool applique in the 'date' block of the Civil War remembrance quilt we did with you for the 150th anniversary. Love applique!

That is an inspiring quilt.
I think collecting is an art, it takes a discerning eye and an appreciation for color and display.
Good plan for your upcoming block of the month.

Love those blocks. Looking forward to next year's sampler now!