Kissie and a Contraband Quilt 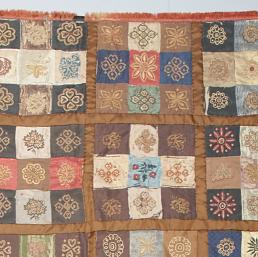 Silk Quilt passed on in the Gary family
Collection of the Anacostia Community Museum
1991.0097.0001 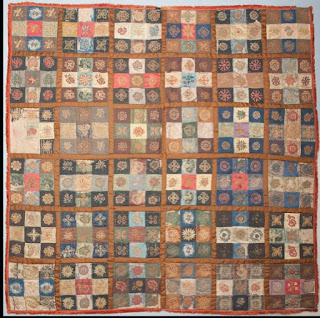 This embroidered silk nine-patch has an impressive family history.

Kissie Owen (1856-1945) was born into slavery near the Saluda River in Columbia, South Carolina. She recalled her early memories of the Civil War for her descendants, including stories of Sherman's Army coming through the neighborhood and the plantation mistress burying valuables for fear of losing them to the Yankees. 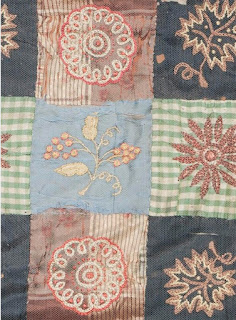 After the Union Army moved on Owen family slaves
including 8-year-old Kissie followed them. Kissie took
this elegant quilt with her and kept it all her life, passing
it on to her children. 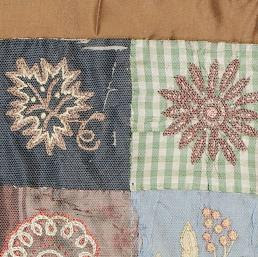 The silk has deteriorated over the years. The squares have been
conserved with a net to keep silk shards from falling off. 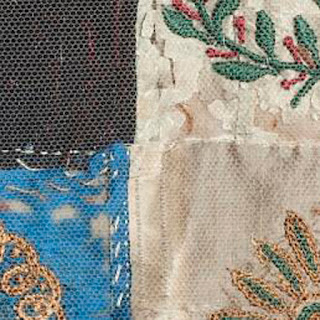 Kissie recalled that this show quilt had a place of honor draped
over a sofa in the main house.

After the War Kissie married Wylie Young and when widowed George Martin Gary. She lived in Newberry County, South Carolina, and spent the last twenty years of her long life in Washington D.C.
Her granddaughter Rhuedine Gary Davis, (1913-2005) donated the quilt to the Smithsonian Institution where it is part of the Anacostia Community collection. Rheudine is also remembered as an influential community activist in Washington.

See more about Kissie (was her given name Kissiah, a variation of the Bibilical name Keziah?)

Others in her family have done research on their geneaology.

Can't make your lad link work. This is a very interesting story and I've never seen a quilt like it. It's lovely that Kissie wished to preserve it. Perhaps she knew or was related to someone who worked on it who was a slave and not necessarily the mistress of the house.