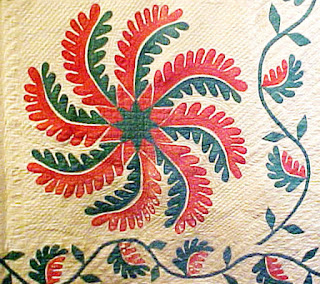 Eliza Suggs was born after the Civil War to parents who had been slaves in North Carolina. In 1906 she published Shadows and Sunshine, a book about her family and the stories she'd heard of life before emancipation. 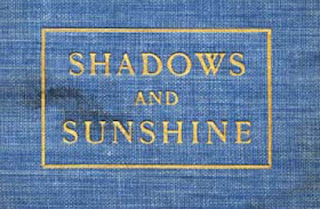 Most of the tales were quite sad. Her father James disappeared during the Civil War, leaving wife Malinda with four children. Their owner Mr. Suggs removed two of the children to another place so Malinda would not try to escape. He knew she would not leave her children.

After the war James Suggs returned. He'd escaped and joined the Union Army, serving as a private in the 27th Colored Infantry.The family moved west to Illinois and on to Kansas and Nebraska.

Eliza was born with a bone disease and never grew correctly. She is on the left below with her sisters. She required a good deal of care since she could not walk and her sister Katie in the center was responsible for that care.

One story Eliza recorded tells of her parents' marriage:

"While James was still quite young [he was born in 1831], Mr. Suggs bought a little slave girl, named Malinda Filbrick. In time, James and Malinda came to love each other, and were married while yet in their teens. 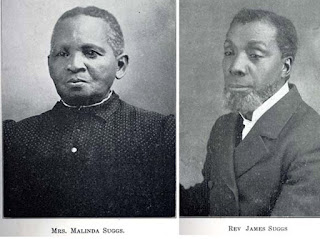 Malinda and James Suggs long after the war.

The same pride of heart which had manifested itself in his own stylish appearance, now prompted him to lavish his extra earnings on his young bride." 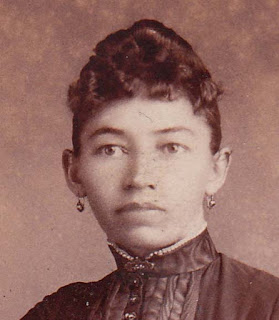 Ear-drops on an unknown woman,
what we call earrings

"One instance of his extravagant indulgence was the purchase of a $7.00 pair of ear-drops, which doubtless afforded him much gratification until the ill-fated day when they proved too strong a temptation to a party of Union soldiers, who carried them off as spoils.

"Another outlay of his surplus earnings was in the purchase, for his wife, of a remarkable quilt, made after the pattern known as 'the chariot-wheel.' This was truly a masterpiece of skill, and was highly prized by my mother. It seemed about to share the same fate as the ear-drops and was in the hands of a Union soldier, when the earnest pleadings of my mother prevailed upon the kind-hearted officer in charge to give orders for its restoration." 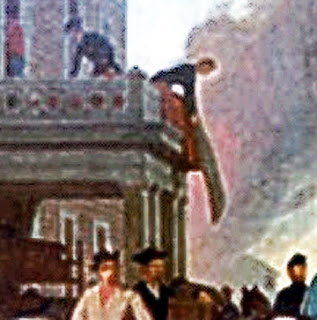 It is interesting to hear that Eliza's father had cash to buy luxuries for his young wife. Eliza did not describe the chariot wheel quilt any further and it may not have survived into her lifetime. 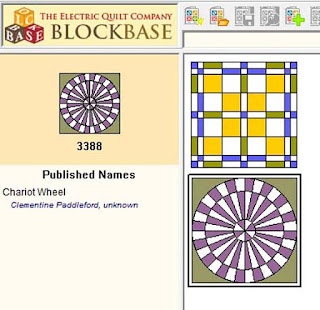 My first thought when I hear of a chariot wheel quilt is a pieced wheel of fortune type such as the purple and green quilt (BlockBase 3388) but those quilts tend to be late in the 19th century. 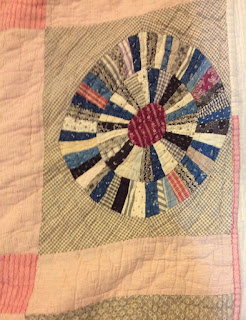 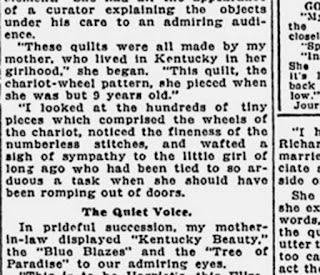 This 1917 fictional piece described several old Kentucky quilts that were not pictured, including

"the chariot-wheel pattern, she pieced when she was but 9 years old. I looked at the hundreds of tiny pieces, which comprised the wheels of the chariot..."

That sounds similar to the picture above, an intricate pieced quilt.

But what would a Chariot Wheel quilt from before the Civil War look like? 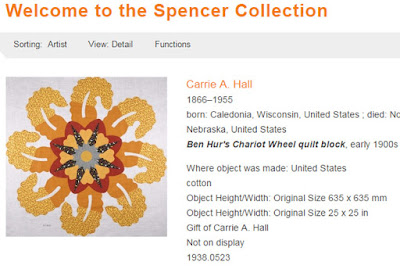 Carrie Hall's "Ben Hur's Chariot Wheel" in the collection of the Spencer Museum of Art.

In 1935 Carrie Hall showed an elaborate applique quilt we might call Princess Feather and named it Ben Hur's Chariot Wheel. That allusion to a popular book published in 1880 seems obscure now. Perhaps this was the kind of quilt that James Suggs bought for Malinda. 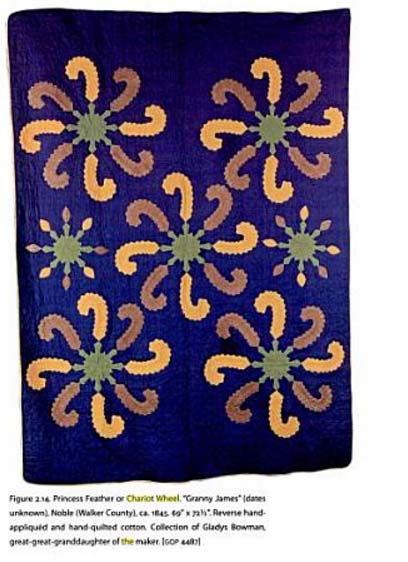 The quilt shown above in Georgia Quilts: Piecing Together a History was thought by the family to have been made by Granny James in 1845 and captioned Princess Feather or Chariot Wheel. The fabrics and style look post-Civil War but the pattern goes back to the early 19th century. 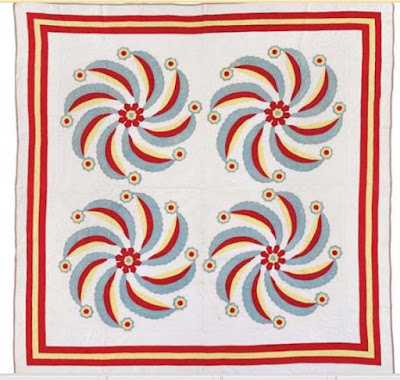 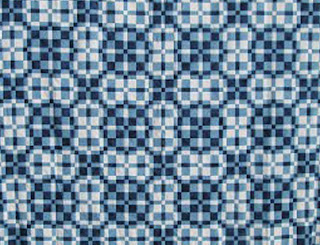 Chariot wheel is also the name of a common weaving pattern that looks like the above. Another quilt pattern possibility.

What an interesting mystery. Thanks for featuring this book as well.

Yes, a very interesting story. As always, the history is so educational.

Thank you for sharing such a great story. I am a history junkie and love to hear anyone's stories of days gone by.

That story went to my heart. I can imagine that family's courage and bravery.
A good word for us living through the day to day difficulties of real life.