A Union Quilt = An Eagle Quilt? 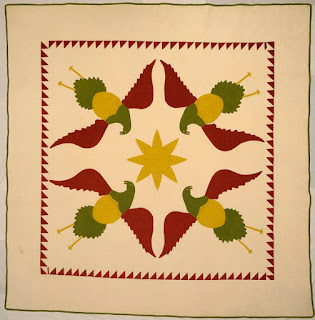 Four Eagle Quilt by a member of the Swengel family,
Union County, Pennsylvania
Collection of the State Museum of Pennsylvania
http://statemuseumpa.org/who-made-rare-union-county-quilt/

Could the Union Quilt sent to the Washington hospital discussed in last week's post be an Eagle applique?
http://civilwarquilts.blogspot.com/2016/04/a-union-quilt-at-annapolis-hospital.html 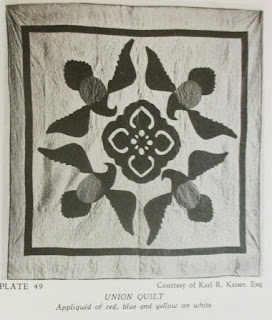 In 1929 quilt historian Ruth Finley called this patriotic pattern “Union” in her classic book, Old Patchwork Quilts and the Women Who Made Them:


"But of all patriotic quilts none is more characteristic than the Union Quilt with four great American eagles spreading their wings across each corner. Red, white and blue are, of course, the colors of the quilt photographed, a touch of gold being added by the shield-shaped patch which forms the body of the bird. This specimen was made during the Civil War when the earlier wide-spread use of the eagle design was revived by the North." 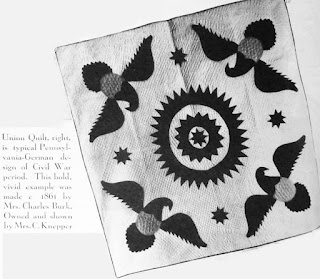 Union quilt pictured by Florence Peto in the Magazine Antiques, 1940

In 1938 Florence Peto published "Old Quilts Tell a Story" in the magazine The American Home.

In 1940 she published the same quilt in The Magazine Antiques:


"The owner of this patriotic item is Mrs. Charles Knepper of Three Springs, Pennsylvania. A similar example has been reported in the possession of Miss Marcia Manning of Williamsport, Pennsylvania." 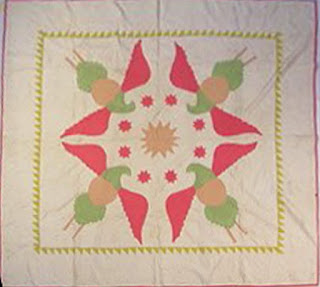 Had Peto access to all the quilt images we have today she would have known there are dozens of similar examples. 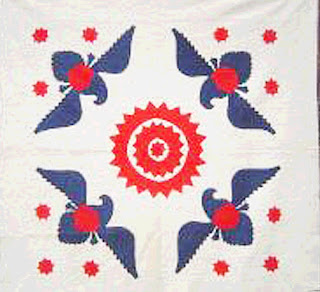 It is amazing how many of these eagle quilts were made but not, as Peto wrote, during the Civil War. 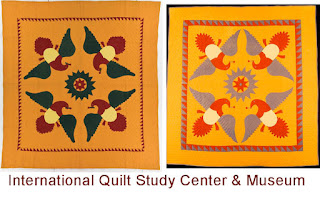 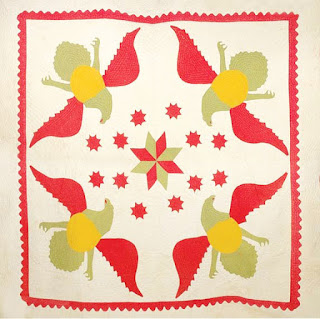 They tend to date from about 1880 through the 1920s and are thought to be influenced by the 1876 Centennial celebration in Philadelphia. 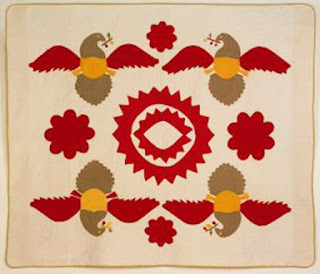 A variety of circular centers and twigs and cherries (or are those olive branches?) are included. 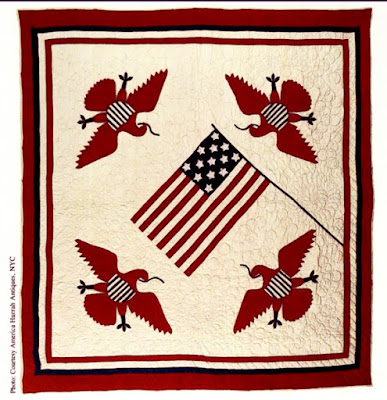 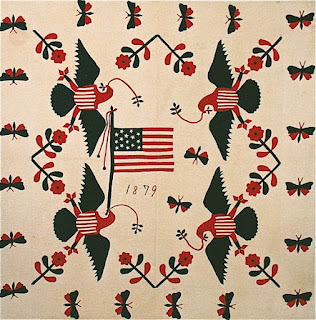 The earliest date-inscribed example I have in my files is dated 1879. 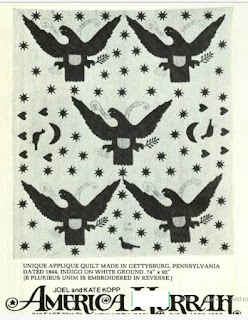 An eagle quilt dated 1844 advertised in The Clarion by America Hurrah. 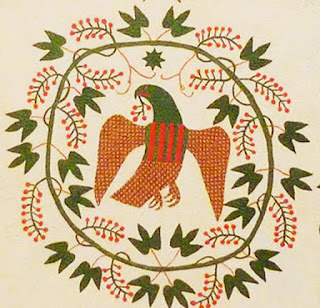 There might be earlier prototypes. The idea of a four-block eagle quilt seems older than the standard eagle we are talking about here. 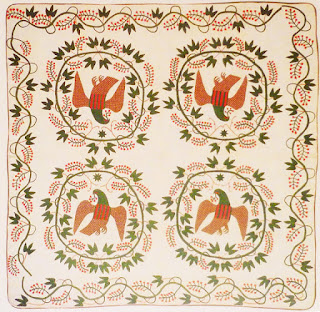 Quilt from the Binney Collection. 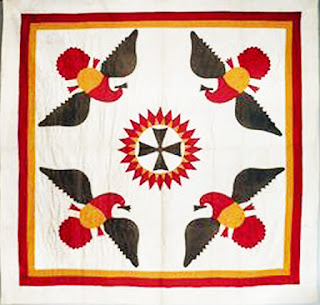 These stereotypical eagles look to be post-1880. Solid color fabrics, strip borders and quilting style are all clues to a post-Civil-War date. 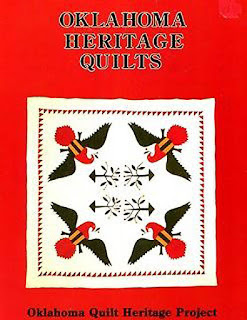 And when you find them in Oklahoma or Massachusetts there tends to be a Pennsylvania link. 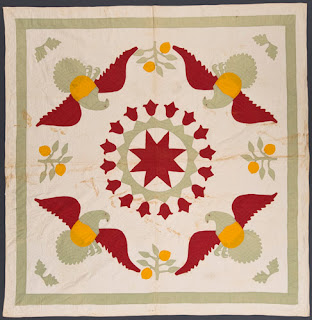 Collection of the University of Texas

So they may have been called Union Quilts when Finley and Peto were collecting stories about quilts but they don't seem to be the Union Quilts referred to during the Civil War.


See more about eagle quilts at Susan Wildemuth's page:
http://www.illinoisquilthistory.com/eaglequiltstudycd.html
Posted by Barbara Brackman at 6:00 AM

Great post on one my favorite quilt subjects! Love them all. Maybe it's time for me to make Eagle Quilt #3

I made one once. I loved working on a grand scale.

I never tire of seeing the many versions of eagle quilts!

Love all the eagle quilts...I'm finishing my original quilt design that has 9 blocks all with eagles...all hand applique and quilted.

Need To Boost Your ClickBank Banner Commissions And Traffic?

I have one hand quilted and hand sewn has initials and is dyed Muslim. I think it must have been made by possibly a great aunt and her cousin. My mom had it hidden in a box of fabric. Would like to know how to get more info. My name is Elaine Groff and my family ancestors came from the Schwartzenau Germany area that would have been my nine great's grandfather Hans Graf who had seven sons.