A Union Quilt at an Annapolis Hospital 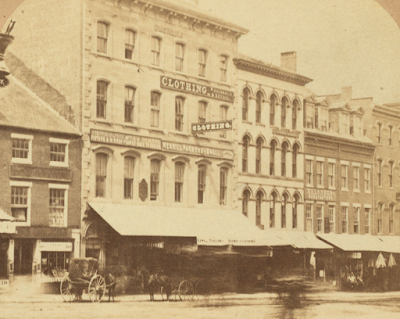 Portland, Maine from the Robert N Dennis
collection of stereographs

In late 1862 sixty women of Portland, Maine, organized the Young Ladies' R F Society "to aid the Ladies San. Com.tee [Sanitary Commission] of Portland in their efforts to improve the condition of our sick and wounded soldiers." In 1865 they made a list of their accomplishments, which included many handmade shirts, drawers, slippers and sheets. And at the bottom of the list: 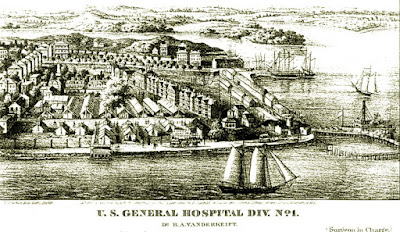 The Naval Hospital in Annapolis

Their list and some of their correspondence is in the collection of the Maine State Museum. One of their Union Quilts was sent to the U.S. General Hospital in Annapolis where nurse Adeline M. Walker of Portland, perhaps friend to some in the group, wrote a letter of thanks in April,1863.


"Wish you could hear all the fine things said about your beautiful Union Quilt. I called the ladies into my room and a Council of War was held over the ingeniously - constructed work, and it was unanimously voted that the young “R. F’s” had shown them selves to be possessed of wonderful genius – talent, taste – skill, patience – wit – industry – piety – patriotism, originality – and I know not what else – but to sum up – it was the best thing of the kind ever seen by any of them — To-day the quilt has been on exhibition in my ward ..."

"Many of the new patients have died – and, nearly all, of Typhoid Pneumonia."

Typhoid was a common disease with a mortality rate of abut 33% at the time.
Two years later the disease claimed Adeline Walker at 35. 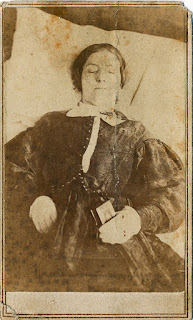 This CDV photograph is dated
to 1864 and said to be a post mortem
portrait of a nurse at the Annapolis Hospital.

The nurses at the Naval Hospital have been fairly well remembered. Adeline Walker was one of nine Maine nurses, assisting head Adeline Tyler. 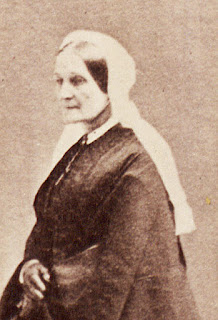 Read more about the nurses there at this link:
http://www.carlisle.army.mil/ahec/exhibits/CivilWarImagery/Naval_Academy_Hospital.cfm 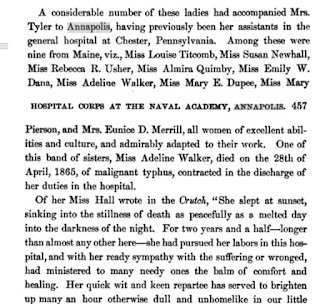 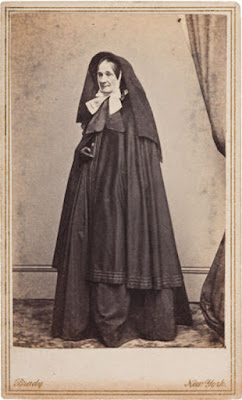 But what did that "ingeniously constructed" Union Quilt look like? 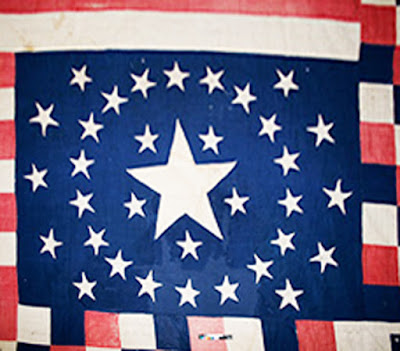 Perhaps it resembled another patriotic  Maine quilt from the time:
http://www.belfastmuseum.org/civil-war-flag-quilt.html

It is amazing how far nursing has come. I'm a retired practical nurse and worked in hospitals, homes, and in Doctors offices. I do remember one doctor keeping his instruments in this pink liquid. I am thankful these diseases are all but gone through cleanliness and vaccinations. I am also amazed of the amount of clothes they wore!

I agree about being thankful for cleanliness and vaccines, life was rougher not so long ago. Women did wear lots of clothes, summer must've been uncomfortable.