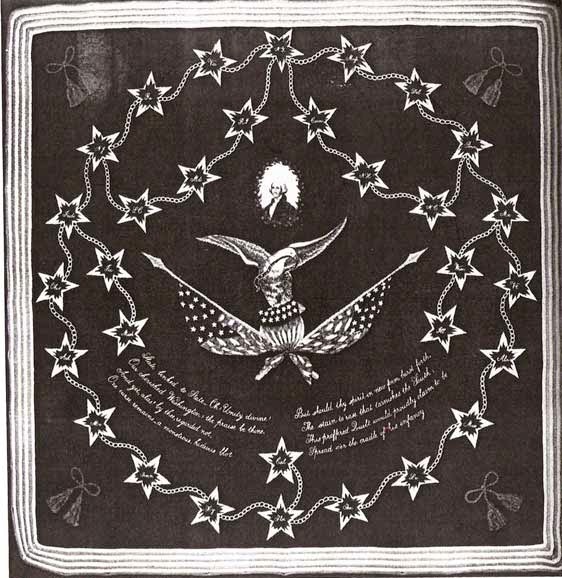 Above is a little-seen quilt with a Civil War connection.
The photo is from Sandi Fox's 1985 book Small Endearments:
Nineteenth-Century Quilts for Children,
in which it is dated as "circa 1860." 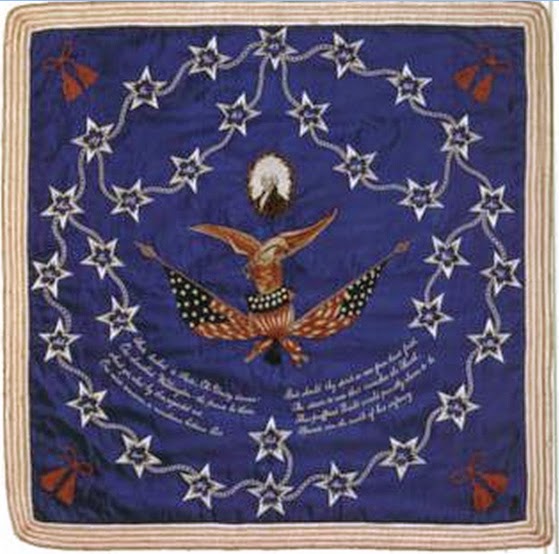 Cuesta Benberry in the American Quilt Study Group's papers: Uncoverings 1983, described a "baby quilt made during the Civil War by Theresa Baldwin Hollander of NY."

The quilt dates to the pre-Civil War years, however, having been  described in 1853 in the magazine Gleason's Pictorial Drawing Room Companion. 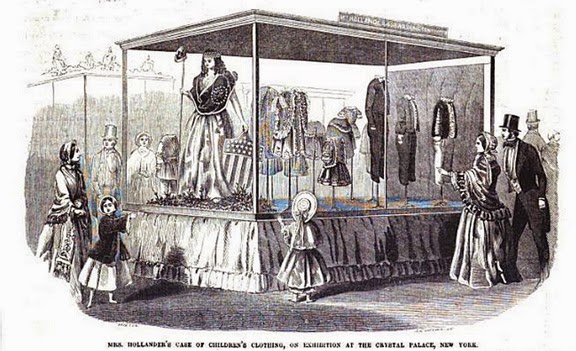 The case of goods which we present... is the contribution of Mrs. M T Hollander, 418 Washington St., Boston, at the New York Crystal Palace Exhibition...."

The article featured the display case from Mrs. Hollander's clothing company, praising the children's fashions for which she was well-known, the wax figure of liberty in the front of the case and then--- 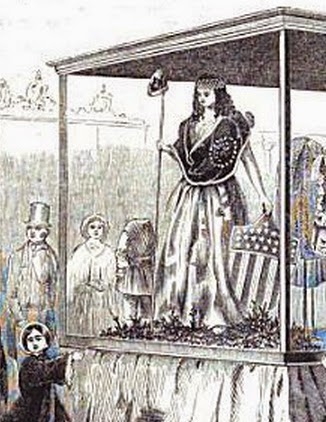 "The small national cradle quilt, opposite the figure was executed [?] for a display of elaborate chenille embroidery.  It was made at the expense of $100 and embroidered by a lady who received a medal at the London exhibition of needlework."

We don't see the quilt in the picture but it is probably the backdrop to the right in the case where we see the back of a textile hanging on a rod. The description fits the blue eagle quilt quite well. 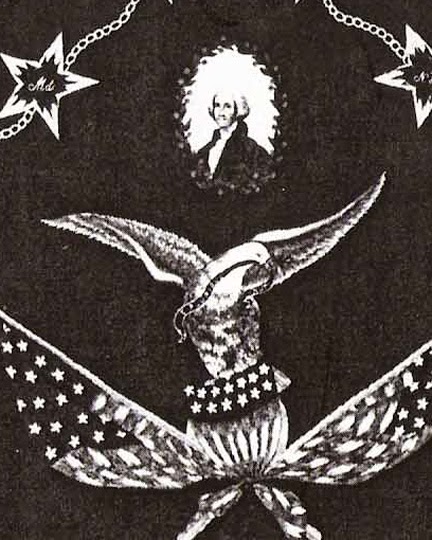 "In the centre is an American eagle, holding in his mouth the olive branch and motto "E Pluribus Unum." He is resting on a shield, and under the shield are two flags one on either side, looped, crossed in the centre, and tied with tassels; over the eagle is the head of Washington, painted on white silk (by the embroiderer); a laurel wreath embroidered round it fixes[?] it to the quilt. The thirty one stars, representing the States, form a circle around the outside, and joined one to the other by a linked chain, the thirteen states first forming the Union are looped in certain form over Washington's head. The quilt is azure blue silk, the border is formed of red and white silk in stripes and stuffed—the whole, as regards colors and emblems, being truly national."

This beautiful piece of work alone should entitle Mrs. Hollander to a medal, for the chaste purity of its design and the elegance of its execution. The variety of patterns, and the adaptation to the age of those for whom these styles are intended, challenge competition, and we saw not their equal in a late visit to the palace."

The reporter seems quite enthusiastic about Mrs. Hollander's display and the "small national cradle quilt," emphasizing again that it is "truly national" and adding the coded words "the adaptation to the age of those for whom these styles are intended."

Despite the emphasis on national, the quilt was truly sectional. The article did not mention the embroidered words under the eagle.

But other reporters did. 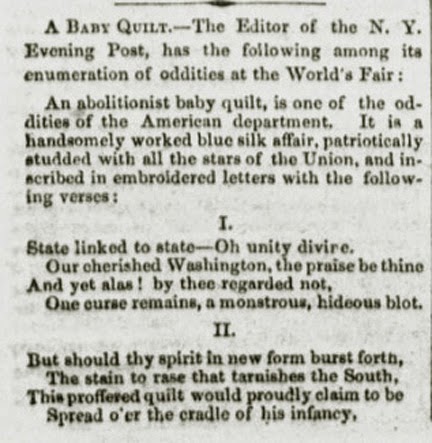 On August 6, 1853 The Anti-Slavery Bugle, printed in New Lisbon, Ohio,copied an article from the New York Evening Post, enumerating the "oddities of the World's Fair."

"An abolitionist baby quilt, is one of the oddities of the American department. It is a handsomely worked blue silk affair, patriotically studded with all the stars of the Union, and inscribed in embroidered letters with the following verses:

State linked to State...Oh, Unity divine!
Our cherished Washington, the praise be thine.
And yet, alas! by thee, regarded not.
One curse remains---a monstrous, hideous blot

But should thy spirit in new form burst forth.
The stain to 'rase that tarnishes the South:
This proffered Quilt would proudly claim to be
Spread oer the cradle of his infancy.

The Anti-Slavery Bugle's readers undoubtedly approved of the verses alluding to a "monstrous, hideous blot," a stain to erase tarnishing the South. They needed no explanation that the blot was slavery. 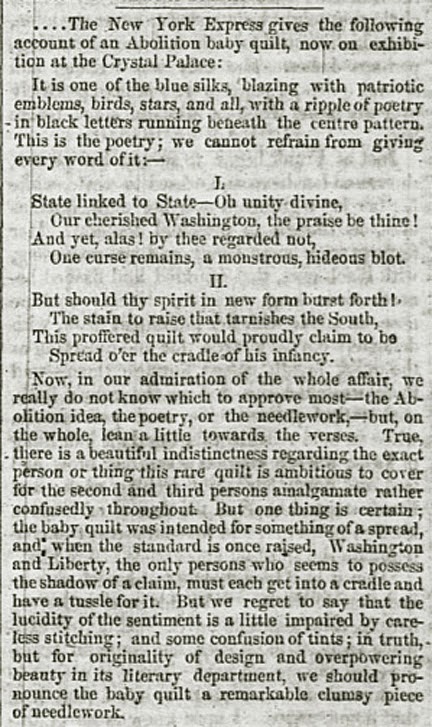 The reporter at the Charlestown,Virginia (now West Virginia) Spirit of Jefferson must have viewed the quilt in the cloth. (S)he first stated approval of the Abolition idea, the poetry and the needlework. The poem had "a beautiful indistinctness regarding the exact person or thing this rare quilt is ambitious to cover for the second and third persons amalgamate rather confusedly throughout...." (Here we have a case of editorial criticism needing a little editing...)

But then there are remarks on the "careless stitching...some confusion of tints," with a conclusion, "The baby quilt is a remarkable clumsy piece of needlework."

Let's hope Mrs. Hollander and the unnamed embroiderer "who received a medal at the London exhibition of needlework " did not read the newspapers of Western Virginia. 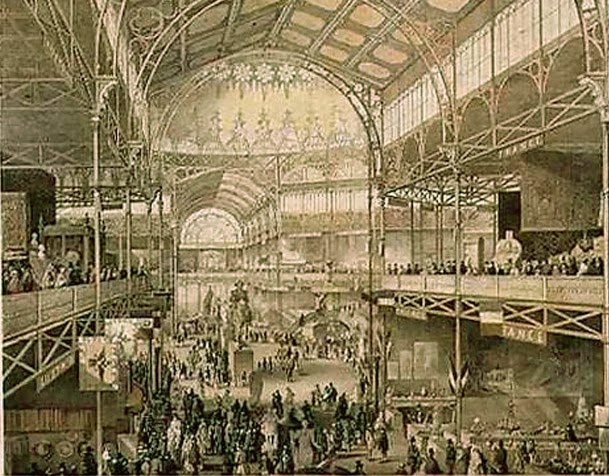 The interior of the Crystal Palace exhibit hall at the 1853-4
Exhibition of the Industry of All Nations in Bryant Park, New York City.

The photos of the quilt were taken by the Society for the Preservation of New England Antiquities (now named Historic New England). The quilt was on loan from a private collection, descendants of Mrs. Hollander.

More on Mrs. Hollander next week.

Here's a link to the 1853 article about the exhibit case:

Great to see this! Another 1853 "emblematic" quilt with crossed flags under a Union shield! Thanks!

That is an amazing quilt and an amazing story behind it. I can imagine the thought and time she might have put behind the creation.

Interesting read about this 'clumsy piece of needlework'. Thanks!

Thank you for sharing! So interesting! I would've liked to have met Mrs. Hollander.