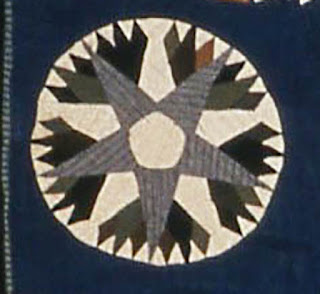 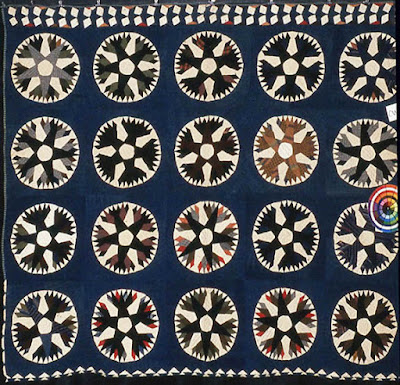 Last week we looked at Sophia Kenner Seaman's quilt,
using clues in pattern, style and fabric to date it as about 1900. 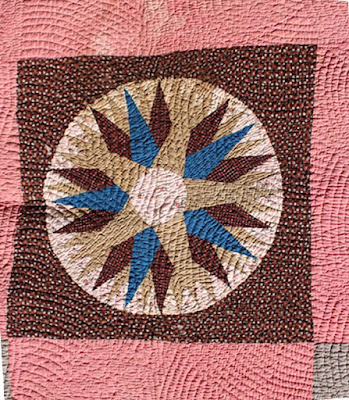 I'm posting details today of other Chips & Whetstones based on five.
This one from North Carolina looks early-20th century.
Sophia's life story has a few inaccuracies in the family memory but we're lucky to have so much information about her and her life in Arkansas and Missouri during the Civil War. The purpose of this
blog is to illuminate women's lives using their textiles and she is a perfect subject. With today's genealogy and digital records we can find much about her.
Some records indicate she was born in the Arkansas Territory in 1823 but her siblings, older and younger, were born in Tennessee to Dorcas Buram & Colonel (that's his given name) Kenner. Her obituary tells us she was born in Hawkins County, eastern Tennessee up by the Virginia line. In 1832 the family went west to Carroll County, Arkansas Territory near the Missouri border, settling in Osage, named for the native tribe who were forced to leave at the time. 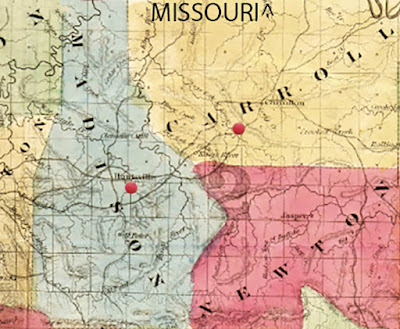 Brother Samuel and his wife Matilda Kenner lived next door in 1850.
Samuel was a dry goods merchant and politician. 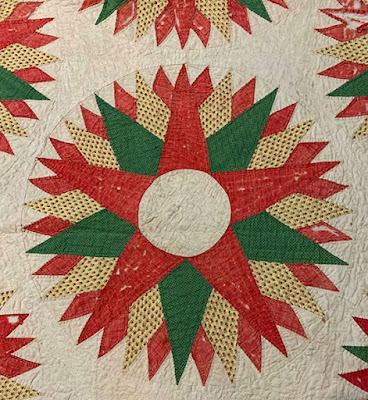 This quilt may be the oldest example of a 5-pointed version in my files,
but red & green is hard to date. Look at the way it's pieced into a circular repeat.
Examples after 1880 or '90 are usually pieced
into square blocks.
Son John grew up to merit a biography in A Reminiscent History of the Ozark Region where we find out more about father Frank, who was born in Saratoga County in 1812 and became a driver on the Erie Canal as a young man. 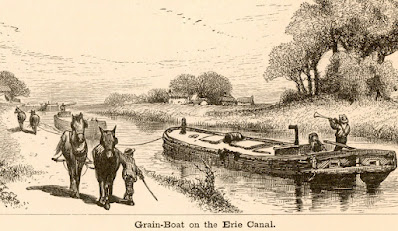 I imagine the "driver" drove the horses and mules that
pulled the flat boats on the canal.
Frank then became a Methodist-Episcopal minister, missionary to native tribes, which is how he wound up in Arkansas in 1838 or so. He studied medicine in Huntsville and practiced for a few years. Being a doctor was not often a profitable occupation at the time so he became a merchant in Carrollton. He married Sophia on August 18, 1846.

1860 Census
The year before the Civil War began, Frank and Sophia were living in Carrollton with three children, one-year-old Charity and her older sister and brother. Frank is listed as an M.D. and a Mercht and an M.E. ? (Methodist-Episcopal Minister). He owned substantial property: $4,250 in real estate and $7,777 in other property, investments, I guessed, not likely to be slaves as Frank soon joined the Union Army. 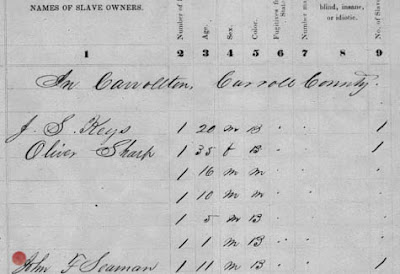 But I was wrong. The 1860 census schedule of slaves lists John Seaman as owning one unnamed 11-year-old boy. (Always have to corroborate!) 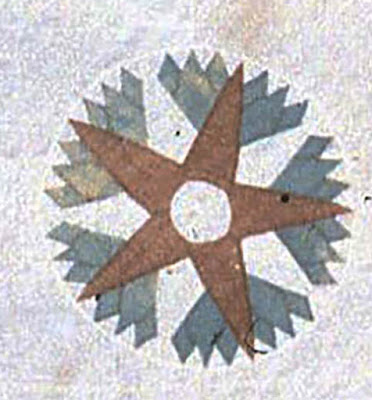 Oregon project saw this from the Schiller family. Fading green
a good clue to after 1880 and probably after 1900.
According to a Carroll County history, "When the Civil War began, most Carroll County residents sided with the Confederacy and voted for secession." But then another tells us, "Public sentiment at the opening of the Civil War was almost unanimously opposed to secession." Son John's biography tells us that Frank Seaman remained in Arkansas "until 1862, when, on account of his Union sentiments, it became unpleasant for him and he moved to Lawrence County, Missouri." That seems a nice gloss on terrible times.
We learn more from Sophia's story:
Like the county the Kenner family was torn. Sophia's brothers Samuel and James Wick Kenner were Confederates, Samuel in the 31st Texas Cavalry; Wick in Missourian Jo Shelby's troops. Husband Frank joined the Union Army. Few records of his military career remain. 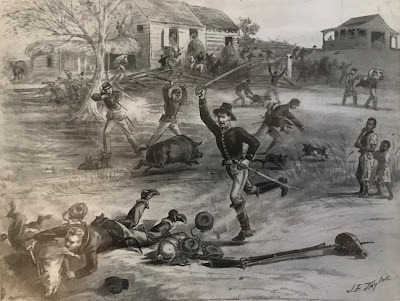 Carrollton was poorly positioned: too close to Union Missouri and Kansas that could send troops to corral and intimidate Confederate guerillas, regular troops and sympathizers. A local history tells us that 3,000 Kansas troops under General James Blunt camped near town in the spring of 1863. "It cannot be said that this visitation is remembered with gratitude by the people of the vicinity."
Everybody tiptoes around Carrollton's Civil War history. Partisanship and revenge must have been so divisive no one wanted to talk about decades later. The Seaman's house was burned but it seems the whole town was destroyed. "By the end of the war, all of the town’s buildings, excluding two stables, had been burned."

Kansan Samuel Reeder recorded Kansas troops raiding in Texas.
Kansas Museum of History
Realizing the hopeless, dangerous situation in northwest Arkansas Sophia packed her children and what was left of her belongings and headed to Missouri. When she got as far as the James River in the Missouri Ozarks she encountered James H. Berry (1841-1913) a young Confederate soldier from Carrolton who'd lost a leg at the Battle of Corinth. She indicates they did some kind of real estate trade, land in Missouri for land in Carrolton. 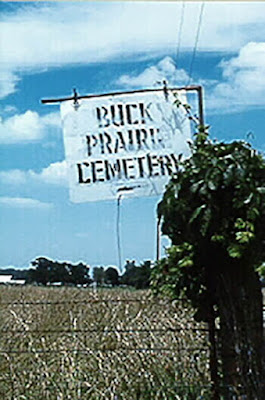 Frank Seaman, probably putting his family first, deserted the Union Army and they settled near the Ozarks town of Aurora where they farmed in an area called Buck Prairie, eventually moving to town---Marionville in Lawrence County, south west of Springfield. Eldest son John F. Seaman II joined the Union's 46th Missouri when he was 17. 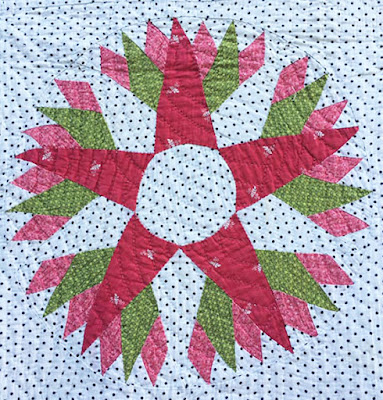 Carol Butzge's collection. Use of a dotted shirting print
for the neutral indicates date after 1870.

1870 Census
Sophia gave birth to her last child Emma about 1868 in Lawrence County.
Father Frank had died suddenly just a few months before the 1870
census at 55. Doty (a boy) was 9, listed as a girl here. 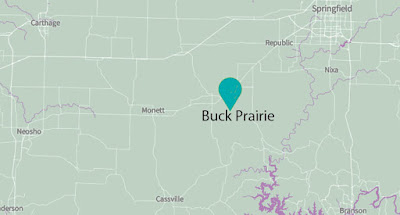 The Chips & Whetstones quilt was probably made in Lawrence
County, Missouri about 1900. Sophia lived about 40 years there dying in
her late 70s in 1903, shortly after breaking her hip. 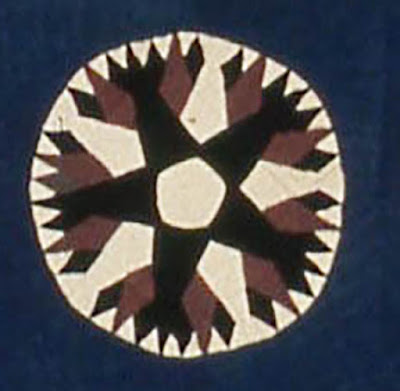 Sophia's 5-pointed Chips & Whetstones. The blacks and grays
in this quilt indicate a date after 1890 and into the 20th century. 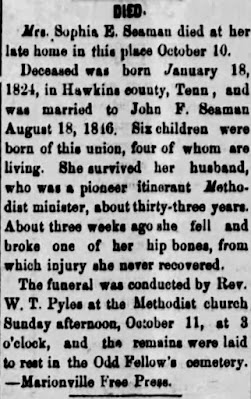 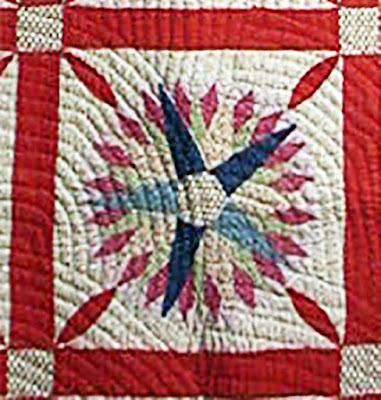 Rhoda Ana Brookshire McKinney
Angelina County, Texas. East Texas Digital Archives
Rhoda's choices, light cadet blue and wine colored
red were fashionable from about 1890 - 1930.
So looking at the files of 5-pointed Chips & Whetstones it would
seem to be a pattern popular with Southerners after 1880---
1890, 1900.
Links
Arkansas Made
https://www.facebook.com/ArkansasMade/posts/1427453050736653
Sophia's grave in Lawrence County, Missouri
https://www.findagrave.com/memorial/114291708/sophia-eskridge-seaman
Note her daughters died in the 1890s.
Sophia's mother grave in Arkansas: Dorcas Kenner 1788-1857
https://www.findagrave.com/memorial/112693790/dorcas-kenner
Letters from Sophia's brother Samuel Eskridge Kenner at the Butler Center for Arkansas Studies:
https://arstudies.contentdm.oclc.org/digital/collection/findingaids/id/8432/
Posted by Barbara Brackman at 6:00 AM

It's not often that you see the cause of death on the headstone - Drowned. 3 year old Dorcas most likely named after her grandmother.