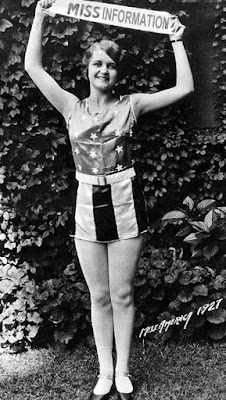 Textiles with a Civil War association certainly are worth more monetarily than equivalent textiles with no accompanying Civil War stories. With a little research one can associate much 19th-century  handwork with the Civil War. Everybody who lived through it (or died during it) had a Civil War story to tell. 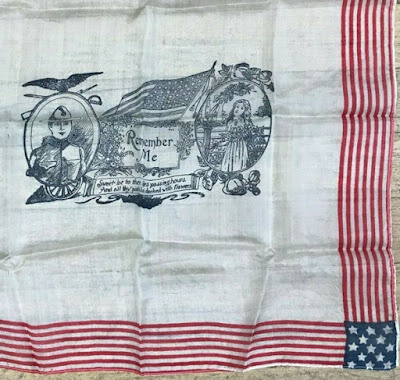 You can also associate textiles to the Civil War with no research at all. Go to EBay and search in antique linens and textiles for the words Civil War. You'll find items like this Civil War handkerchief picturing a World War I soldier. 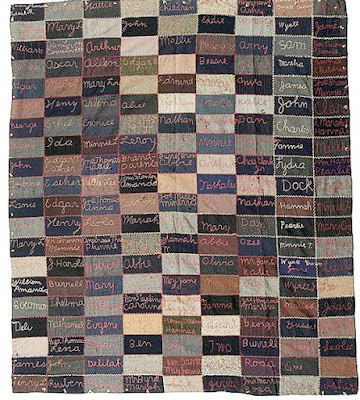 Many of these wool rectangle quilts cut from early 20th-century
fabric sample books are recalled as made of Civil War uniforms. 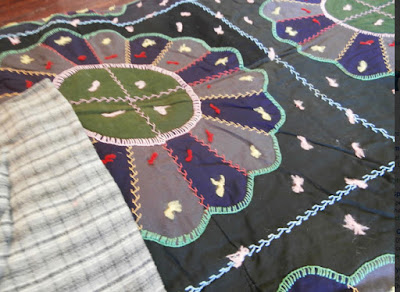 Always interesting that the maker had access to both blue and gray
uniforms. 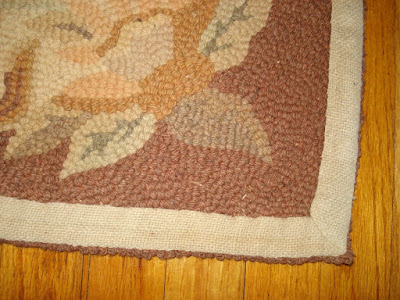 On a related note a reader asked for information on a hooked rug with a Civil War connection; the yarns had been salvaged from Civil War uniforms. Again, an early 20th-century textile with an inflated story.

The questioner had done a little research and found this quote:

"There's a museum in Maine that features hook rugs that were made of Civil War uniforms, so these hook rugs are pretty much indestructible. You should be able to enjoy these rugs forever."

Just because it's on the internet does not mean it is true.

The facts are that these late-19th/early 20th-century rugs were a cottage industry in New England and Canada. Read some actual history here:

So true. And though some folks are just after monetary gain, it can happen innocently too. My mother-in-law gave us a G-ma's flower garden from her mom and stepdad, made by his mother. He had told her it was from the turn of the century which she told us. I told her it was from the 20's-30's based on fabrics. I have nowhere near your knowledge and this was just 20-30 year misinformation. The 50+ yr. ones are just sad from a historical view point (my opinion.)

Same with family history tales - in which I found out were totally untrue! But then the research only cost time and I was enjoying that time.
As for things on e-bay - caveat emptor - buyer beware. I see so many vintage sewing machines that are "rare" and have a huge mark up, then curiosity makes me watch to see if they reduce the price - and they do! I have no interest in buying although it would be nice to have a fiddle base in my collection.

I haven’t read yet, that you will have another QAL for next year. I have a lot of your fabric left. Please!