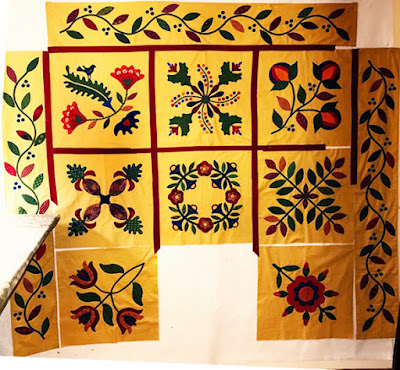 Gladi is making the most of her time healing a bone break by appliqueing.
One more block to go.

We have 830 members of our Facebook Hospital Sketches group with many wonderful examples posted every day. A week from today is the last Hospital Sketches block but it has been so much fun I think we ought to keep on making 18" traditional applique blocks (or whatever size.)

After next week you will have the nine blocks for the Hospital Sketches quilts and several months to finish that up.

At the end of January 2020 we'll start a new traditional applique block of the month, but next year's blocks will be more unusual. This year's were the common designs popular from abut 1840 to 1870. I'll draw them in the same size (I'm making mine 9" square.) 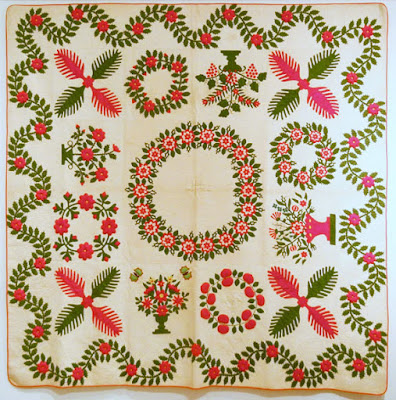 These are NOT the blocks or border but this is the setting idea.

So you could just keep making blocks and make a large quilt or follow the set on next year's and make a second quilt. I've saved a few photos of medallion style applique quilts with a central block that is twice the size of the 12 blocks around it. 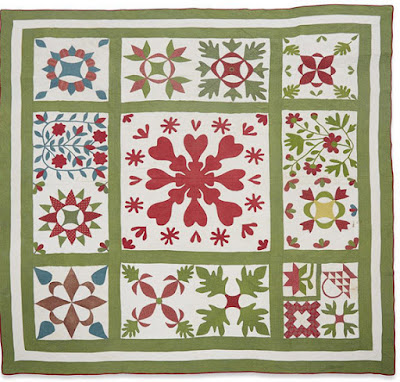 Similar style from a Freeman's Auction.
May have been in Laura Fisher's inventory too. 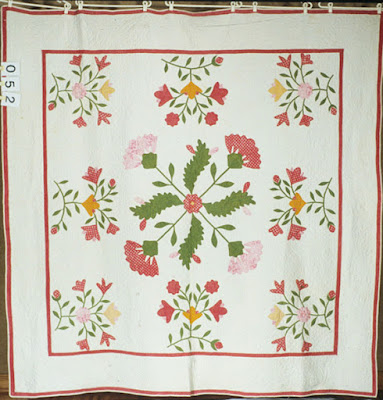 From the Iowa project and the Quilt Index.
1 large block, 8 smaller and some white sashing. 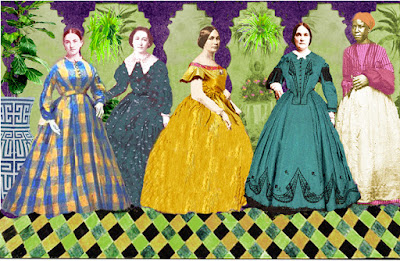 A little Photoshopping of some of Cassandra's Circle.
Adding new dresses and colorizing their portraits is like playing with paper dolls.

The BOM will be called Cassandra's Circle. Stories will have to do with the powerful women at the heart of the Confederate government, mostly based on Mary Boykin Chesnut's view.

Becky says she has four blocks done and so do I. Denniele's working on a Sprouts version with fewer pieces.

Can't wait! I have decided to do my Hospital Sketches in the potholder method (big surprise) and hope to post a photo of my first quilted block next week. We'll have to see if I can "potholder" this next one too. It's fun to figure out how to adapt certain quilts for the potholder method. Some are easier than others. Thanks for the challenge.

I'm cracking up since next year's BOM layout is similar to what I'm doing this year! I really need to catch up. I think I'm a couple behind. Looking forward to next year's blocks and everyone's versions. Thank you, Barbara!!!!

Sounds great but I can't keep up with all these fabulous projects..lol.
Love these BOMs and the time and effort you always put into them. I learn so much.

I’m disappointed as a I was hoping for traditional piecing next year. I guess I will go back to previous years and find blocks for my Ladies Album fabrics, or use your wonderful Civil War book.

I forgot to mention that we also are planning a pieced BOM for next year too. Got to get on that.

I love pieced and appliqué. All I need is more time. LOL Next year should make me very happy.

I love pieced BOM and no time for applique tough I need to improve it.I`d following reading your post about this new BOM.Thank you for these BOMs!