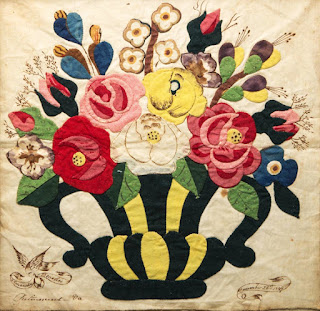 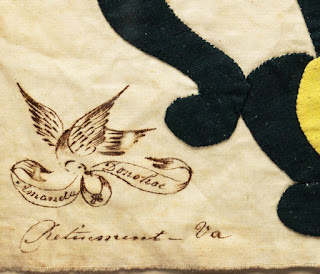 Some of you may recall Amanda's inking with its graceful banner from
last year's Antebellum Album quilt. 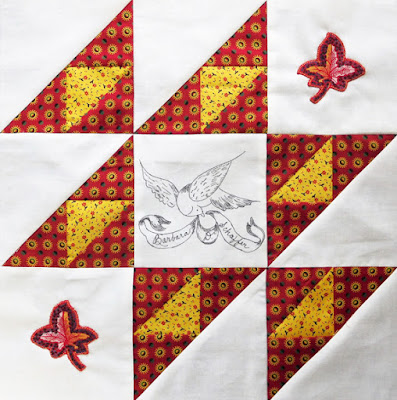 Amanda's framed block has been sold and resold over the past few years, advertised as a theorem. It's quite a pretty thing but it seems obvious that it's an album quilt block. Aren't theorems stenciled or painted? 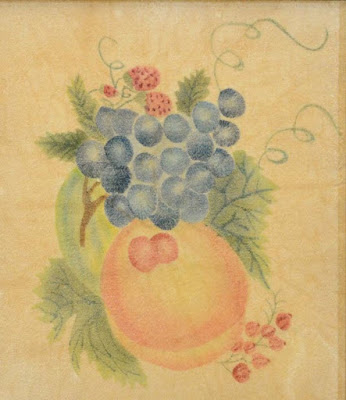 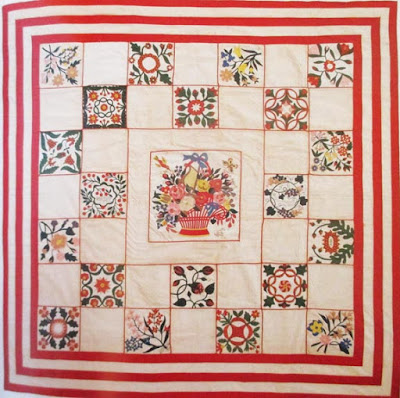 Amanda's piece is an appliqued and inked album quilt block in the Baltimore style. 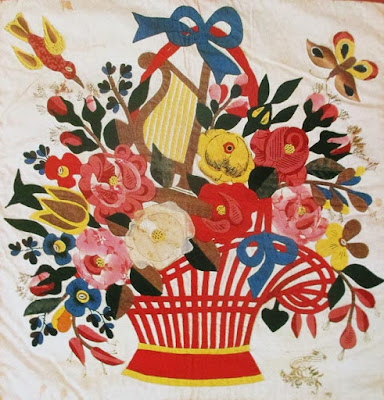 Style doesn't get any more Baltimore than the center of this
quilt, which is also signed Amanda Donohoe, 1849 (October)
Is that the initial H for her middle name? 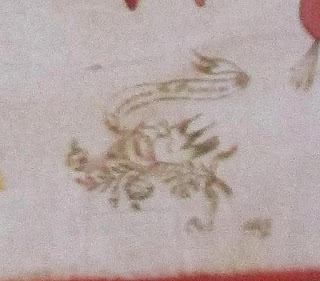 With a similar banner in her inscription. 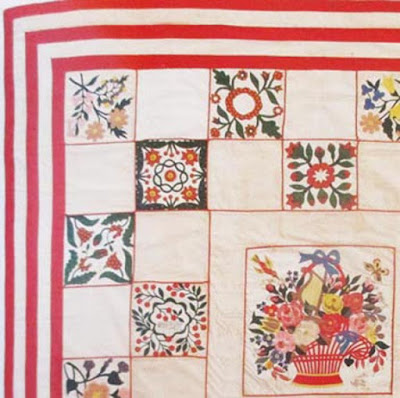 I'd guess the Maryland Historical Society's quilt was put together long after 1849. The setting is unusual for a Baltimore album and the border of five red and white strips is something you might see after 1870 rather than in 1850. It descended in the Darnall family who donated it in 1957. They thought it might have been made for Thomas Lewis Darnall but could find no connection to Ms. Donohoe.

How did Amanda Donohue come to be associated with two such beautiful blocks?

The lone block at the top of the page is attributed to Amanda Heaton Donohue (1815-1901) who lived her long life as a single woman in Loudoun County, Virginia. "Retirement" in the inscription may refer to the name of the Donohoe family home.

When the blocks were made Amanda was about 34 years old. She was from a family of eleven children born to John Varner Donohue and Sarah Chilton Roszel. Several of the Donohue girls remained single, probably supported by brother Stephen George (a common name in the Donohue family) who was characterized as "being the main dependence of a large family" 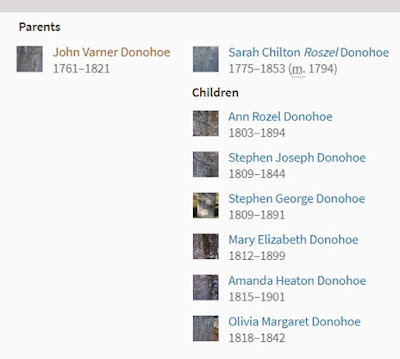 By the time of the Civil War three sisters were living: Ann Roszel, Mary Elizabeth and Amanda. Brother Stephen had four boys in the Confederate Armies and the aunts wrote to them. Their home in Philomont, Loudoun County was in the midst of war with Union and Confederate sympathizers living side by side and various armies crisscrossing the mountains throughout the war. After the Union Army occupied nearby Leesburg in 1862 Amanda wrote:

"Oh that this horrible, this unnatural war were at an end. 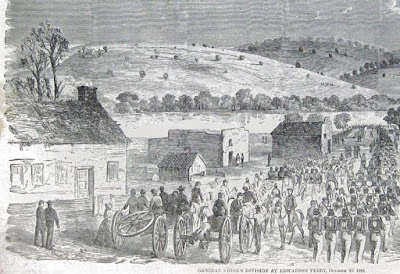 "We are cut off from nearly all communications with our friends, both North and South....[Nephews] George and LeGrand too have fled from home with many other secessionists rather than take the oath of allegiance. George was very unwell when he left, and we have not heard from him since. They took the horses."

Two of the boys died in battle. Donohoe family letters are now in the Thomas Balch Library in Leesburg. Nephew John Carroll Donohoe (1838-1921) left a diary of his war experiences, which is in the Library of Virginia. 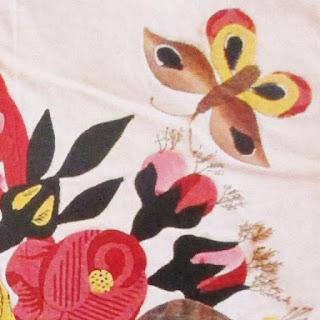 Detail of the center of the quilt

Back to happier times and the Baltimore album blocks with Amanda's name: Baltimore is about 75 miles away from Philomont. We have no idea how they came to be made, but a little research into her family history reveals that her grandmother Sarah Chilton Roszel (1775-1853) was one of the leaders in Baltimore's first Methodist Societies. As the Methodists are closely connected to the fashion for Baltimore album quilts, we can imagine Amanda's link. 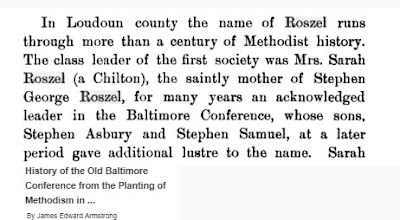 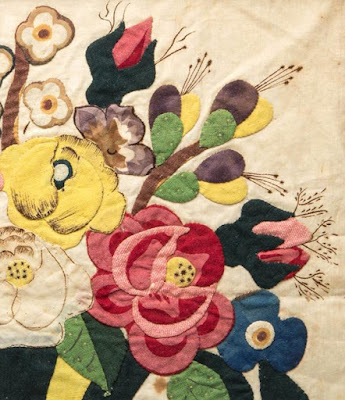 Detail of the single block 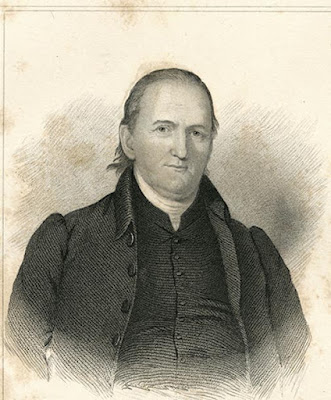 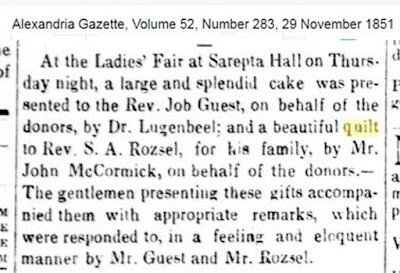 In 1851 Mrs John McCormick of Alexandria, Virginia,
presented a "beautiful quilt" to Stephen Asbury Rozsel (sic),
probably gotten together by ladies of a Methodist church there.

Amanda herself was a member of the small Methodist Church in Philomont.
Roszel's Chapel or Mountain Chapel was built on her mother's family land. 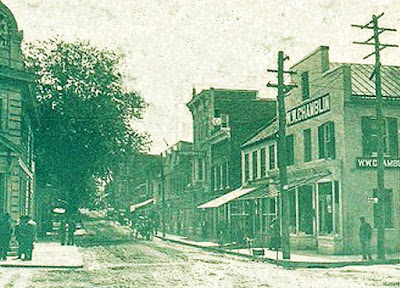 Leesburg about 1910
Amanda died just a few years before this photo was taken. 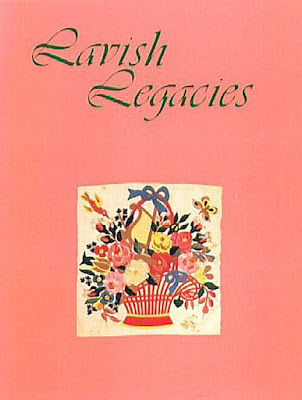 Amanda's block is on the cover of curator Jennifer Goldsborough's
catalog of quilts in the Maryland Historical Society
but her name is omitted in the lists of makers.

Fantastic memory and detective work! Amanda's smallish vase block 13"x 13" could be scaled up by the blockmaker, presumably Mary Simon, to be used in a full-sized BAQ, and in fact it was. The Horton quilt block A4 in Goldsborough's "Lavish Legacies" p. 61 in which the blocks are 16.5" x 18." Ronda & I can now add another name to our list of quilts made for Baltimore-area ministers 1840-1862; Rev. Roszel will be no. 36, and the 23rd for a Methodist. Thanks!

Always surprised to tell you something you don't already know, Debby.

What a pleasant surprise to see my Antebellum block. Love that original inked signature!