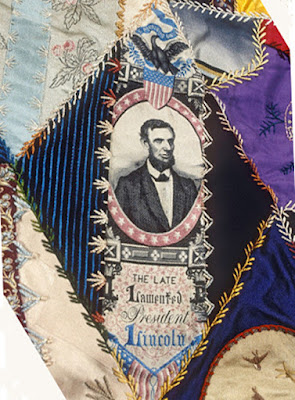 A Lincoln ribbon for Lincoln's Birthday

Post War Crazy Quilts are a good source of Lincoln memorabilia, particularly ribbons. This woven mourning ribbon is featured in a contained crazy quilt in the collection of the Smithsonian's National Museum of American History. 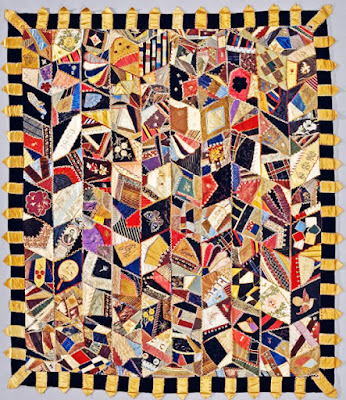 Gift of Edith B. Putnam

The caption indicates the quilt was made in Fall River, Massachusetts by two sisters named Vickery who never married, information probably included when the quilt was donated. It's dated 1883 in one diamond. 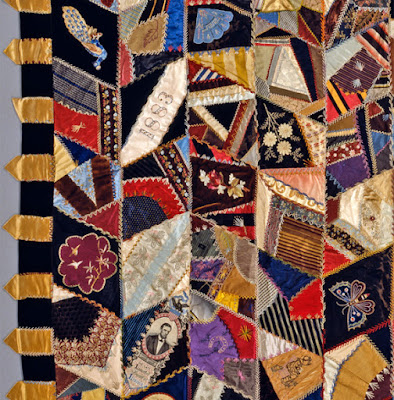 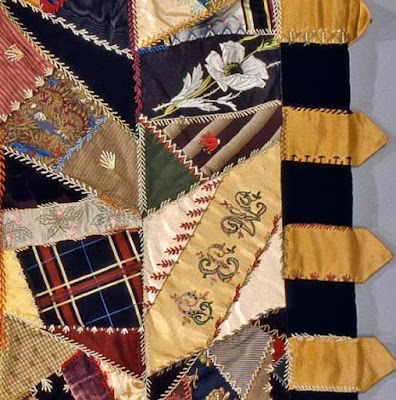 And features one set of initials, perhaps L.E.W.

UPDATE: Wendy says to turn this over and it's MBT.
Makes more sense. 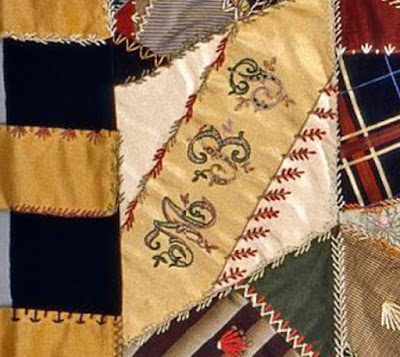 Many Vickerys lived in Fall River in the 1880s, all apparently related. It may be that the sisters were part of Caleb & Almira Wheeler Vickery's family of daughters (they also had a son Charles E.) 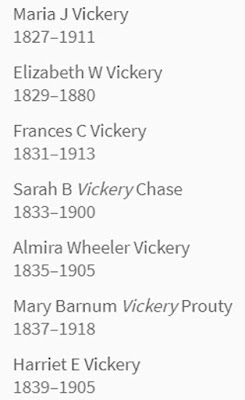 Single women Maria, Frances, Almira and Harriet Vickery,
ranging in age from 56 to 44 years old in 1883,
are likely seamstresses.

The Vickerys seem to have been a family of prosperous merchants in Bristol County, beginning with a sea captain and then an importer of "West India goods" (D.D. Vickery, 1852 directory). Father Caleb Vickery ran a "variety store." 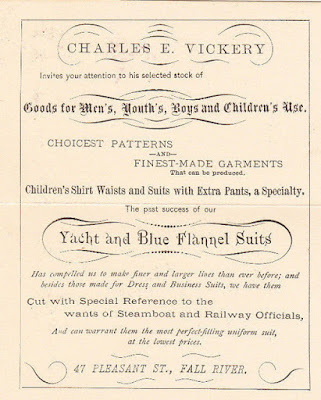 And his son, the Vickery women's brother Charles
owned a men's clothing store on Pleasant Street.

There are other Vickerys in Bristol County, but I think the link to family in the dry goods business could have something to do with this elegant quilt. 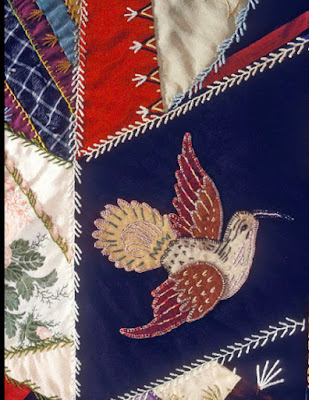 Some Vickery information from a county history:

"In the last part of the [18th] century there were living in Bristol county three heads of families by the name of Vickery,—Robert Vickery of Rehobeth, who died in 17 90; Elijah Vickery of Taunton, who died in 1814 ; and David Vickery of Taunton, who died in 1828. Robert was the first of the name to appear upon our county records. David married Priscilla Barnum, daughter of Rev. Caleb Barnum, seventh minister of Taunton. They were the parents of Charles R. Vickery, and Caleb Barnum Vickery [the women's father], who is still living in Fall River at the age of 88 years."

Enjoy some large pictures of this quilt:
http://americanhistory.si.edu/collections/search/object/nmah_556454

Perhaps the W in the initials was a Wheeler cousin or niece or nephew.

Wendy in NH
Hi Barbara, Look at the initials in the opposite direction....looks like MBP to me.
Wendy(wcoffin7@aol.com)

The whole time reading this I could not help but think of how they may have had dealings with the Borden Family. Perhaps Charles Vickery may have made the suits for Mr Borden or sold fabric for Lizzie and her sister to make their dresses. Very interesting. I love reading your blogs. Thank you so much.