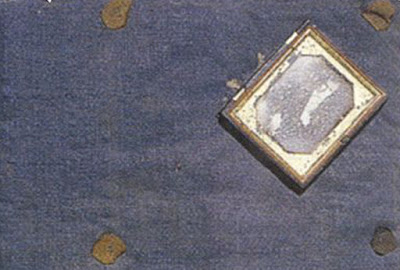 This comforter fragment is not much to look at but it has a story. 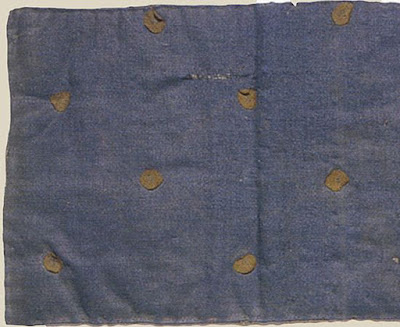 The piece is about one-sixth of a tied bedcover. The blue is probably a calendered wool, a finish that gives it a gloss. It is tied with knots to hold the layers together and behind the knots are circular wool patches, presumably to keep the knots from popping through the top.

The fragment was donated to the Kansas State Historical Society with the story that it was made by the women of the Boston Emigrant Aid Society in 1855 and sent to the newly settled Kansas Territory. 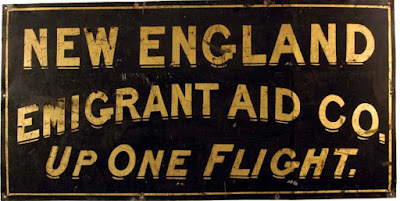 
The Emigrant Aid Society was founded in 1854 to assist antislavery settlers who moved to Kansas to vote for a Free State constitution. Lawrence, Topeka and Osawatomie were the primary antislavery settlements in the new territory. Many proslavery voters were also headed for Kansas, primarily from adjacent Missouri, a slave state.

The family of New Englander Dr. S. B. Prentiss believed the comforter to have been sent to be a fund raiser for a raffle in Lawrence. Dr. Prentiss was the lucky raffle winner in 1855. The homely bedcovering was distinguished by remnants of Revolutionary War uniforms. The brown circles behind the knots were said to be the uniform fabrics.

Dr. Prentiss's descendants reported that he impressed upon them the value of the piece. It was so valuable to the family that it was cut into segments so several children could inherit it. The Kansas Museum of History has two of the fragments. 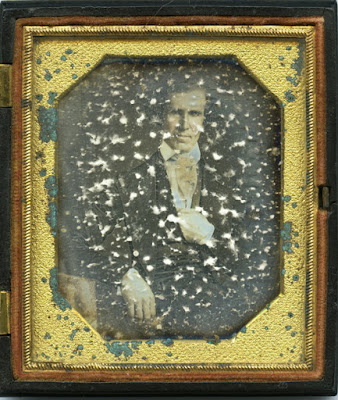 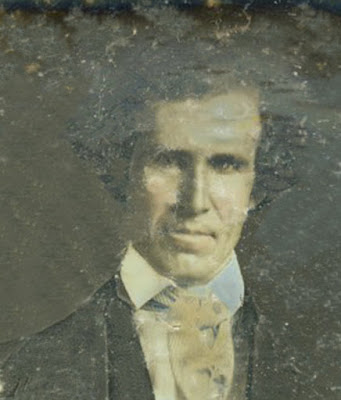 His papers are in the Kansas Collection at the University of Kansas. Their biography:
"Sylvester B. Prentiss was born in Chester, Massachusetts on May 4, 1817. He pursued medical study and began the practice of medicine in Coventry, New York, then in Jackson, Georgia. In 1855, he moved to Kansas, settling in Lawrence, where he continued his medical practice." 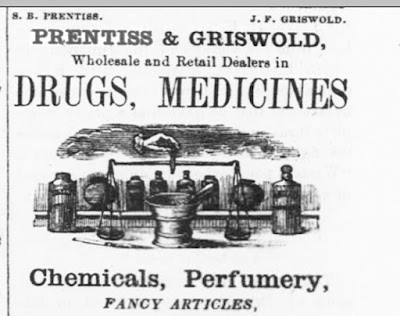 Prentiss was married three times:
His first wife was Louisa Brooks, married October 24, 1839 at Norwich, New York. Children: Joseph L. Prentiss and Louisa B. Prentiss Simpson
His second wife Mary N. Converse came to Kansas with him. Children: Ella A. and Frank. She died in 1865 in Lawrence.
His third wife Annie Julia Soule of Maine was also a Kansas emigrant. Children: Charles A. 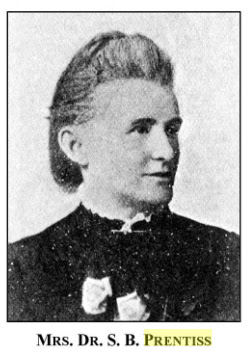 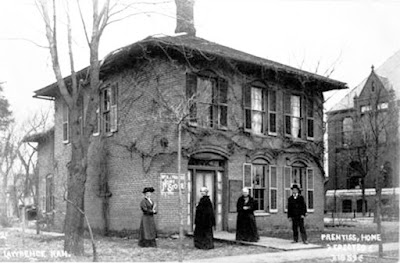 After Sylvester Prentiss's death in 1892 Annie operated a store, the "Home Store," in the Prentiss house at the corner of 11th and Massachusetts Streets in Lawrence, Kansas. The Watkins Bank is across 11th Street in the background.  Annie is third from the right and her step-son Frank is on the right.

I count five children for Dr. Prentiss: Five pieces. Some of the Prentiss children moved to Colorado. We can hope the story of the Revolutionary War uniforms stayed with the odd piece of tied wool.

A link to the page about the fragments:
http://www.territorialkansasonline.org/~imlskto/cgi-bin/index.php?SCREEN=show_document&document_id=102792&SCREEN_FROM=keyword&selected_keyword=Prentiss,%20S.B.&startsearchat=0
Posted by Barbara Brackman at 6:00 AM

Fascinating story. I was not aware of that Aid Society. Pretty Amazing. Thanks.