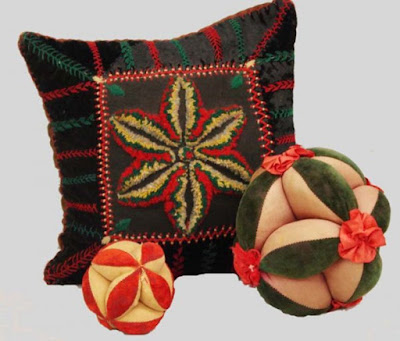 20,000 Pincushions came into this Boston building to be given to
20,000 Massachusetts soldiers in one ten-month period during the Civil War. 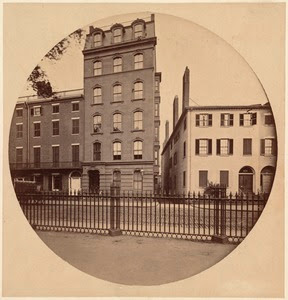 This obtuse Civil War statistic came to my attention while
pursuing the story behind an intriguing certificate,
sold at Skinner's Auctions. 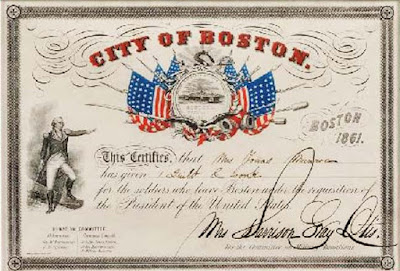 "City of Boston. Boston 1861 This certifies that Mrs. Jonas Munroe has given 1 quilt & work for the soldiers who leave Boston under the requisition of the President of the United States., (signed) Mrs. Harrison Gray Otis," 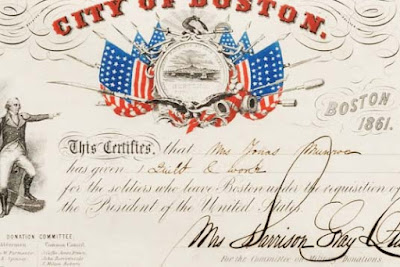 Mrs. Harrison Gray Otis must have been quite a personality if
we can judge by her signature, which was printed on the certificates. 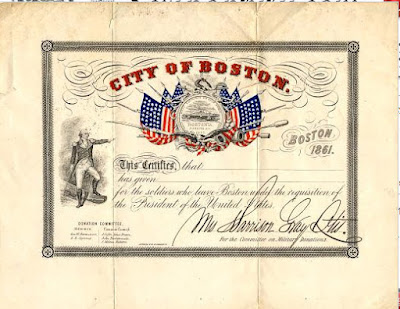 Here's a blank version
and one given to Mrs. Appleton in thanks for 19 pair of mittens. 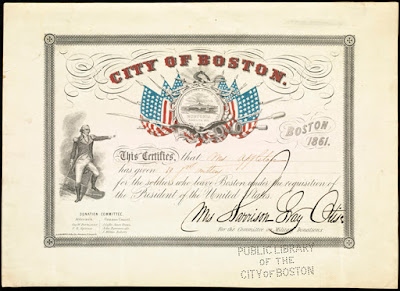 A little poking around Boston's Civil War history told me a lot about Eliza Otis and her donation certificates. 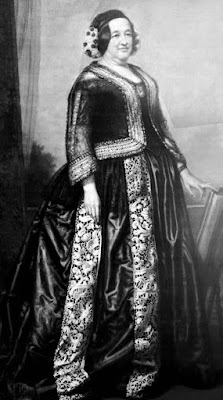 Eliza Boardman was born in the first years of the American nation in Boston, daughter of "a wealthy merchant of the India and China trade." In May of 1817 she married the son of Boston's mayor, one of many men named Harrison Gray Otis. 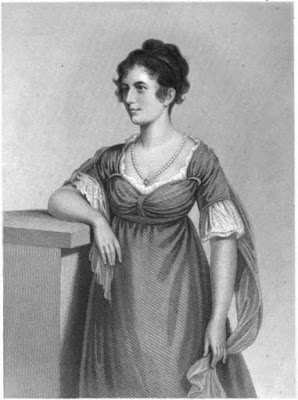 Eliza about the time of her marriage

Her Mr. Otis, a lawyer, died in his thirties in 1827 leaving her with five children and a lot of money, some from her family, some from his. She took the children to Europe for several years and returned to Boston where she was a renowned society hostess, famous for her Washington's Birthday parties. In 1854 she published a novel The Barclays of Boston. 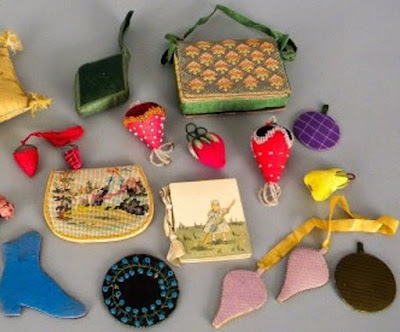 
When the Civil War broke out she was in her mid-60s. The "indefatigable Mrs. Otis" became the manager of the Committee on Military Donations, which ran a City Donation Room, a Soldiers' Aid Society. The whole idea may have been hers. 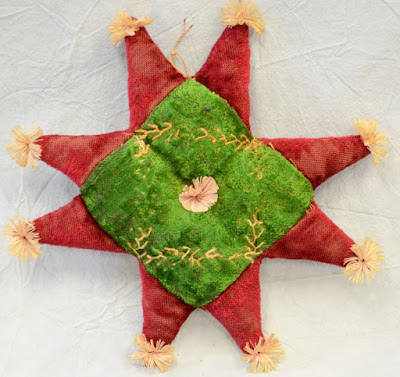 A good excuse to show some pincushions, most made
after the war.

In discussing women's aid for the Union Army we are most familiar with the national Sanitary Commission, which took over soldiers' aid societies across the Union, but Eliza Otis was apparently not to be taken over. Her City Donation Room continued as an independent local charity throughout  the war, focused on the healthy soldier, his family and the ex-soldier rather than on the hospitalized man. According to a history of the Donation Committee, she took over the Evans House on April 29, 1861:


"Making it a general depot for receiving and distributing conveniences and necessaries to the soldiers of Massachusetts....She receives anything and everything for the soldiers--

...distributed, to her order only, to all the soldiers who apply. They come from the camps and get complete outfits....Each person who makes a donation receives a printed certificate, with the signature of the agent and an acknowledgment through the newspapers." 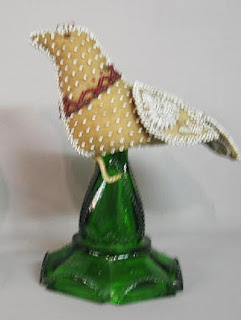 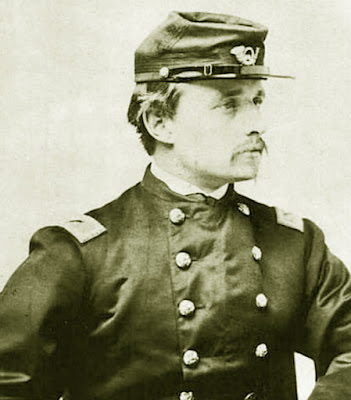 Robert Gould Shaw was a beneficiary of the Donation Room on his way to fight in late May, 1861. He wrote his mother:

"Annie Agassiz... gave me a needle & thread &c case ....The next day she sent me 2 flannel shirts, 2 prs. woolen stockings & 2 hdkchfs which came from Mrs. H. G. Otis who represented some Society or other."

Bedding, quilts, comforters, coverlets and pillows were also distributed. They handed out cash for things they couldn't supply. 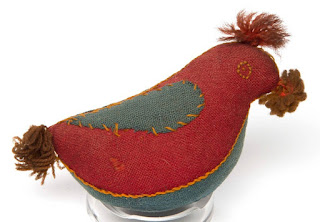 Back to the certificate given to Mrs. Jonas Munroe for her donation of 1 quilt & work (probably needlework): She was perhaps associated with the Jonas Munroe family in Lexington, Massachusetts who ran a tavern (a hotel). 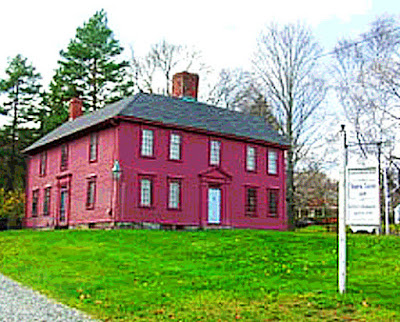 The Munroe family operated this 18th-century tavern, which still stands. 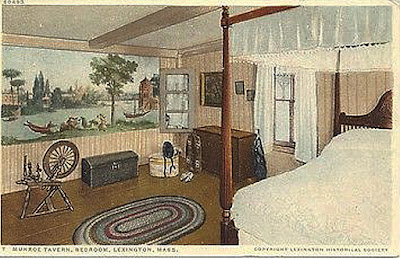 When it was decorated in high Colonial Revival style shown in this vintage postcard
there was a white work bedcover on display. 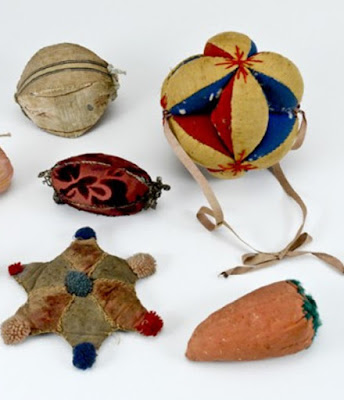 Pincushions and certificates: All in all, a little remembered aspect of women's work in the Civil War. 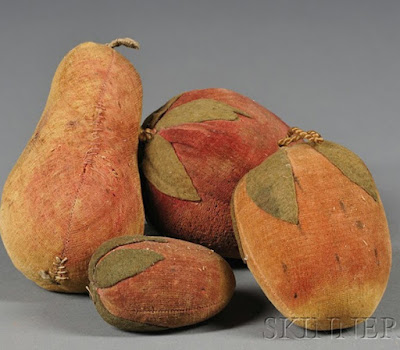 Read The Barclays of Boston by Eliza Otis here:
https://archive.org/details/barclaysboston01otisgoog

A link to a 19th century version of her life:

Aahh, you found my Achilles' tendon. I have a bit of a collection of pin cushions- nothing as exquisite as what you've shown, but I enjoy them.

So am i Laura.

Perhaps they sent them to loved ones to show they were still alive? Perhaps something small for a birthday/anniversary gift? Or travelling uniform repair kit?

I think the idea was being able to repair your clothing with no woman around to do it for you.

I find the idea of pincushions amazing. Not small sewing kits, but pincushions. So interesting ...