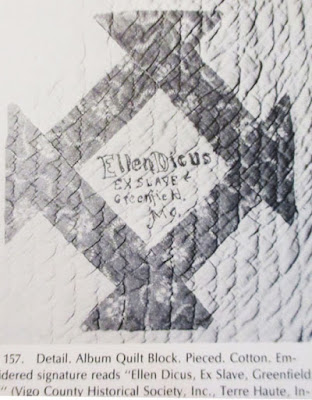 Thousands of people who'd lived as slaves made quilts but few made a note of their past history. This block was pictured in Patsy & Myron Orlofsky's Quilts in America in 1974, in the collection of the Vigo County Historical Society in Terre Haute, Indiana. Fabric and signature style look to be after 1880 into the early 20th century.

I haven't found any more about the quilt except that Ellen's signature may be the only one on the quilt and it is in a corner block. Ellen herself is another matter. 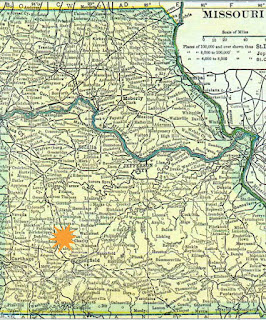 Greenfield, Missouri is under the orange star.

Ellen Hobby Sloan Dicus (1831 - 1910) lived much of her life near Greenfield in Dade County, Missouri in the Ozarks. 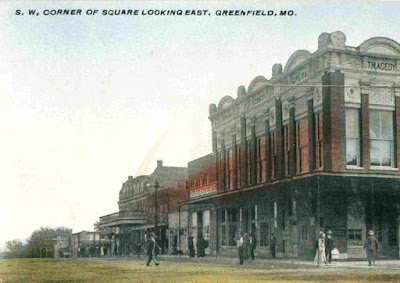 Greenfield about 1910 with  the Opera House on the corner
and the hotel at the other end of the block.

She's buried in the Greenfield, Missouri cemetery with her husband Emanuel [Manuel] H. Clopton Dicus (1832-1910). The files on the Dicus family at FindAGrave give us a lot of information.
https://www.findagrave.com/cgi-bin/fg.cgi?page=gr&GRid=179158642

The 1880 census shows the couple as farmers who owned their own land, living in Sac Township in Dade County with nine children (although later records indicate Ellen had seven surviving children.)

Lila Cole, who maintains the Dicus records at FindAGrave, writes:
"Ellen Dicus was born a slave in Tennessee. She was at times 'owned' by two different slavers one named Hobby and one named Sloan."

Daughter Rowena Malinda was born in 1859 "on  the old Sloan Homestead on [the] Sac River" in the Ozarks. The Sac, which feeds today's Stockton Lake, ran through Dade and Green Counties. 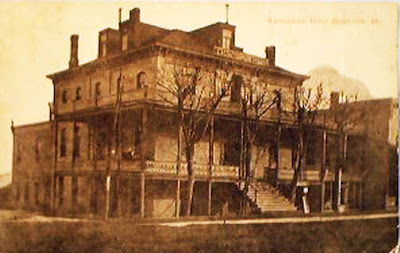 I think the hotel still stands


She may have come from Tennessee with the family of William Bradley Sloan (1814-1855) who settled in Missouri in the 1830's, building "a large double log house" in Sac Township. Ellen's husband Manuel was probably a slave in the family of Edward Dicus (1790-1865) from Jackson County, Tennessee. 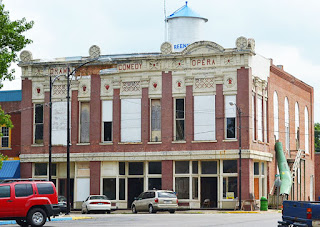 When the Civil War began 300 people lived in Greenfield. Seventy-one of them were enslaved. Missouri slave holders, mostly small farmers, tended to maintain just a few slaves. The 1860 schedule for Dade County indicted there were 346 enslaved people and 107 slaveholders, about 3 per family. 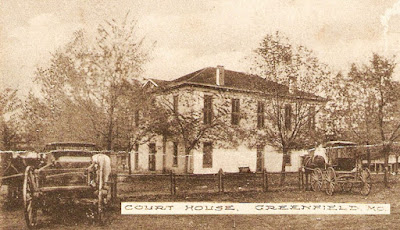 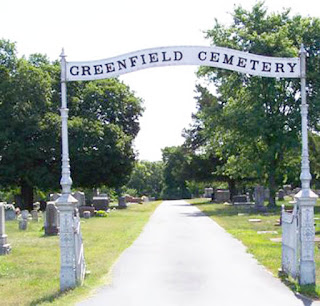 By then Ellen and Manuel were resting in the Greenfield Cemetery, but several of their children were probably still living near Greenfield---although one might have gone east to Terre Haute taking the quilt.

That is so interesting. Thank you very much. I wonder what their lives were like during and after their slave years, good or bad. My heart goes out to her and her family.

I am from Dade county. I live in Everton the town next to Greenfield. I love researching such history and am very glad you posted such an article. I love the photos, and how you quoted from my favorite historical references, Dade county an her people. Please continue your tremendous work.