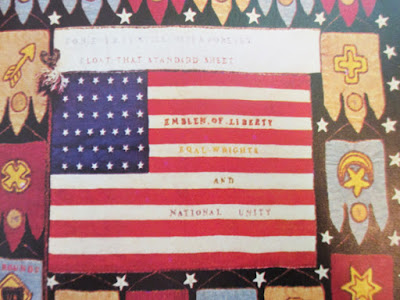 Mary Carswell wasn't much of a speller but
you have to give her credit for advocating
"Eqal Wrights"
on her 1887 Civil War Commemorative quilt. 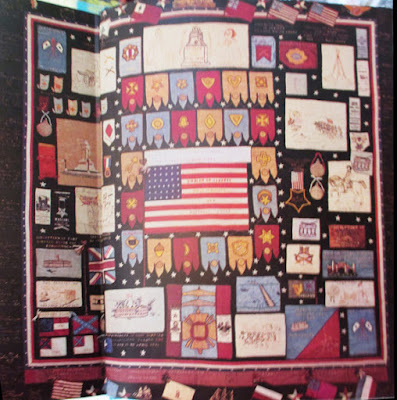 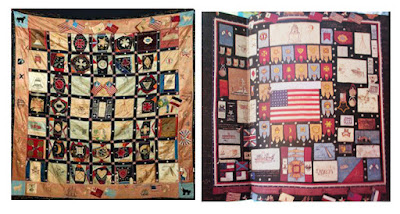 This is Mary's second quilt made of corps badges and other memorabilia from the veterans' organizations. The first dated 1885 is in the collection of the Mattatuck Museum in Connecticut.
http://www.mattatuckcollections.org/Obj6199?sid=338577&x=3995562
http://civilwarquilts.blogspot.com/2014/03/mary-carswells-grand-army-quilt.html 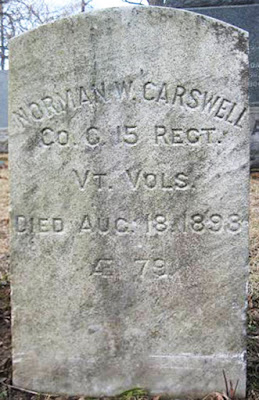 Mary Carswell, born about 1820, was married to Union Veteran Norman Williams Carswell (1819-1898.) He joined the 15th Vermont Infantry in September 1862, which went to Washington to defend the city and then on to Manassas and Gettysburg.

One problem with uncovering information about the quiltmaker is the variable spelling of her married name. Her Vermont-born husband is listed as Carswell or Caswell. One can imagine that Vermonters pronounced both spellings as Cahz-well. He's buried as Norman Carswell in Waterbury, Connecticut but listed on the Union Soldiers Memorial in Wheelock, Vermont as Norman Caswell. 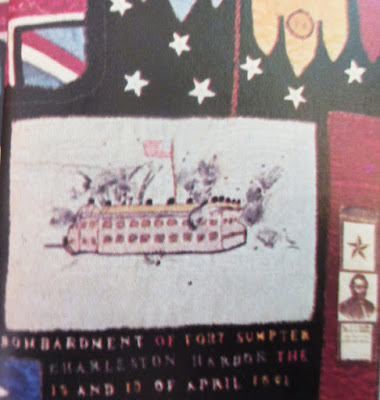 The Bombardment of Fort Sumter 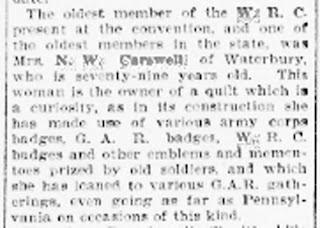 Mary earned a mention in 1899 as the oldest member attending a Connecticut convention of the Women's Relief Corps, the W.R.C. She was "seventy-nine years old. This woman is the owner of a quilt which is a curiosity, as in its construction she has made use of various army corps badges, G.A.R badges, W.R.C. badges and other emblems and mementoes prized by old soldiers, and which she has loaned to various G.A.R. gatherings....."

Only one quilt is mentioned, perhaps this one the second. 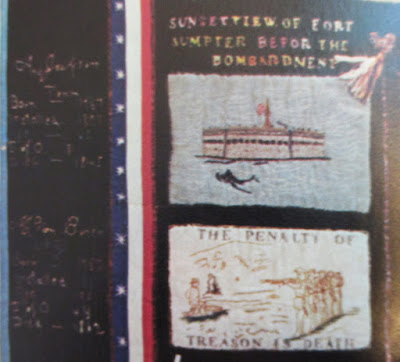 The top embroidery is "Sunset View of Fort Sumpter Before the Bombardment"
The bottom: "The Penalty of Treason is Death."

That's the fun thing about tracing people in history - name variants. I've been going through mine and my grandmother's maiden name was spelt quite a few different ways. Catherine is a name also that has given me some headaches with other family members - like Kat or Kitty in childhood, but never Cathy and then it's marked as Katheryn on the birth records. All down to how the person documenting heard the names from uneducated people. Add regional dialect when they moved to London and it's quite irritating! Ooh arrrr! LOL.

I am really enjoying all your postings, thank you.

And what could you do with Kerry? Carrie for starters.

What do the top two lines above the "emblen of liberty" say? (I can't figure out how to enlarge the picture enough to make out the words.)
I wonder if Norman was related to Zeruah Guersey Caswell of the eponymous (and very famous) carpet. [http://www.metmuseum.org/art/collection/search/13576]

Lol! I've been Terry, Carey, Carrie, Kerrie, Ceri - and unfortunately all my junk mail up until I was married (and then a few after that) was addressed to Mr!

What a clever way to tie the border into the body of the quilt. Carolina Lily is on my bucket list and I just pushed it a little higher up the list. As always, your posts motivate me. Thank you!
ตารางคะแนนลาลีกา