Edward Burges Marches Off to Fight the Yankees 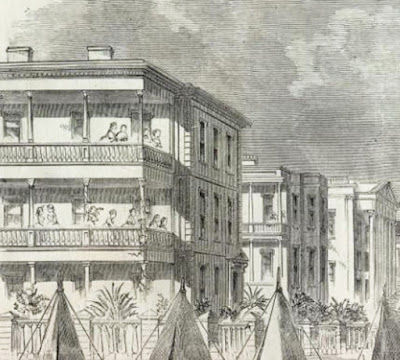 Women on the piazza, the side porch of a Charleston house,
watching Confederate troops camped on the Battery overlooking the harbor,
Harper's Weekly, May, 1861

"We have Dress parades every afternoon.
Quite a number of ladies come to witness them when the weather suits."

Edward Burges enlisted in a Charleston, South Carolina unit in 1861. His diary noted the day the 4th Brigades of the South Carolina Militia marched out to battle a threatening ship in the Charleston harbor.

"Regiment was out drilling and I was quietly greasing my boots, we received orders to start off immediately. I swallowed some food in a hurry, got all my ammunition about my person, on repairing to Regimental ground I met mother and sister, gave them some few things to take care of and we marched off not knowing where to. 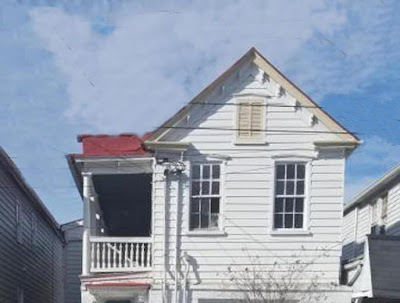 "Our road was lined with ladies waving handkerchiefs and one in Spring St at a window held up her baby and called out 'No Yankee prisoners.' "

The women waving must have hoped to disguise their anxieties under such brashness.  Thirty-year-old Samuel Edward Burges was the only surviving son of Margaret Seyle Burges (1804-1877) and his sister Anna her only surviving daughter. They were lucky that day. The report of a Union ship in the harbor was a false alarm. The Burges were quite fortunate in that Edward survived the War. He lived into the 20th century, dying at 76.

On that November day Edward handed some keepsakes to his mother and she may have given him a few tokens or necessities but we are lucky she kept her best quilts at home. 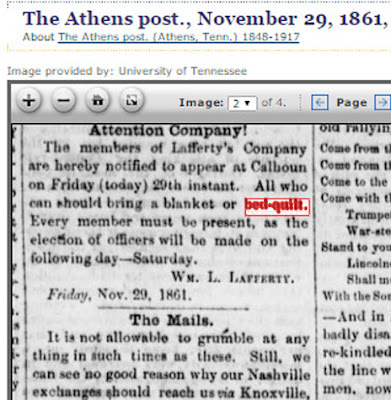 Members of this Tennessee company were
instructed to bring their own bedding:
"A blanket or bed-quilt."

Margaret Seyle Burges (1804-1877) left at least two spectacular quilts that survived the Civil War. They were passed on in Edward's family until just a few years ago, when descendants gave them to the Charleston Museum. 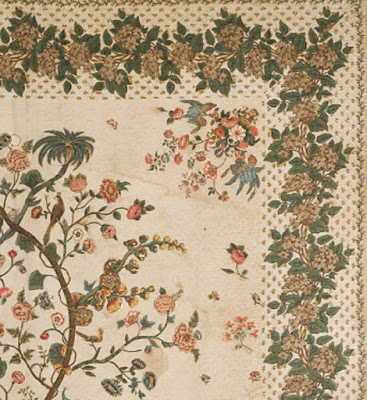 1833 was the year between Edward's and Anna's births. The panel quilt below was probably made in the 1830s also. Margaret gave birth to five more children between 1836 and 1843 but none lived beyond their 18th year. 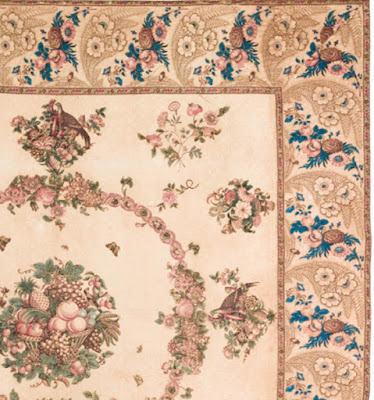 Detail of a cut-out-chintz medallion with
the popular fruit basket panel in the center.
Charleston Museum # 2010.036 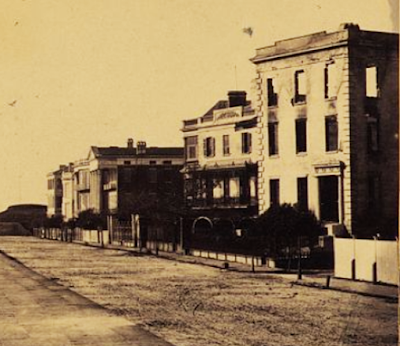 Ruins on the Battery.
Photo by George F. Barnard, 1865.
This is the same street as in the illustration at the top of the page,
viewed from the other end of the block and the War.

Obviously these quilts were well cared for despite the destruction in Charleston. Photographer
George F. Barnard documented the ruins of Charleston at the end of the War. 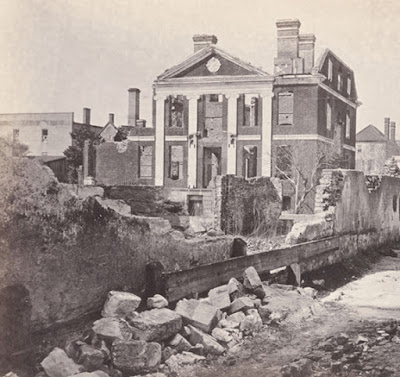 I haven't been able to find anything about how Margaret and Anna spent those five miserable years. 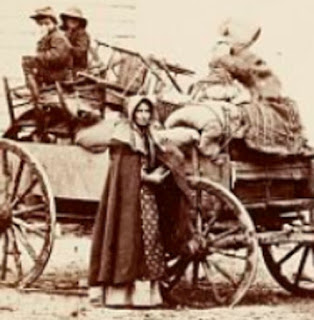 Another of Barnard's Civil War photos,
"Refugees Leaving the Old Homestead" shows two
women and two children with furniture and textiles tied to a wagon
in 1862.

The quilts indicate the Burgeses were well-to-do before the War. Husband James S. Burges, who'd died in 1850, had been a successful printer. Edward himself worked for the Charleston Mercury newspaper before the war, traveling through the country around Charleston collecting subscriptions and reporting on local news such as tornadoes and trials. He obviously had not inherited enough property or money to live on, although he owned a farm in Cheraw. 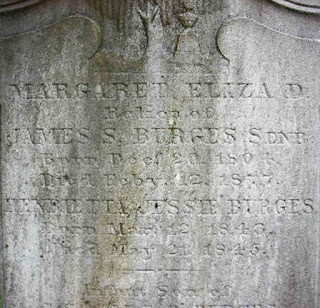 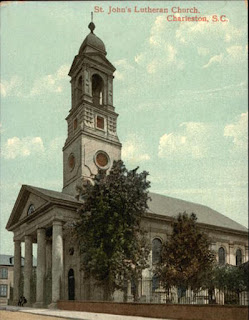 The Burges family is buried in the yard
of St. John's Lutheran Church, which
like Margaret survived the war. She died in 1877. 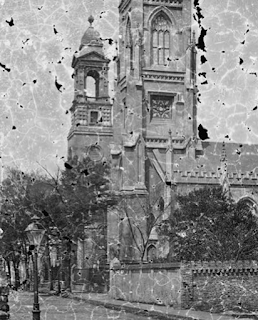 St. John's at the end of the war, the tower on the left.
Photo by Barnard.