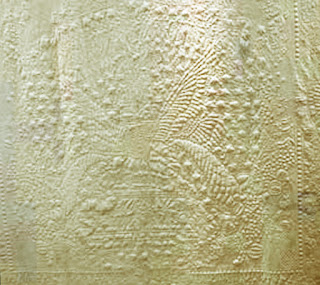 In my book Quilts of the Civil War I mention but do not show the above quilt. Showing a whitework quilt is always problematic. What I can see in the above photo is eagle wings on either side of a shield and below those a pair of cornucopia. There are stuffed stars and a good deal of fruit.

Patsy and Myron Orlofsky pictured the quilt in their 1974 book Quilts in America. Their photographs show the back-lit stuffed work, which gives us more information about the design. 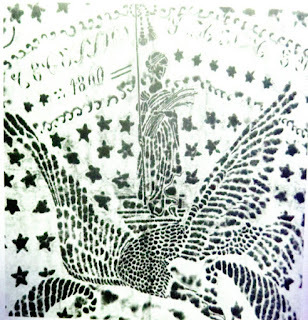 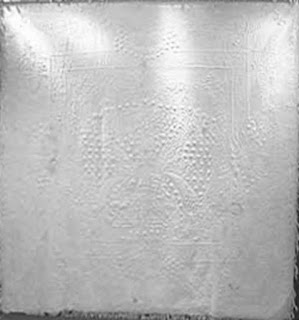 The quilt has a knotted fringe around it.
It was sold out of the family in 2003. 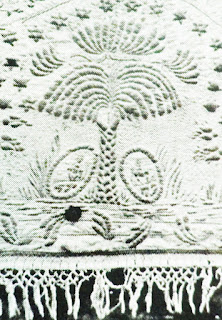 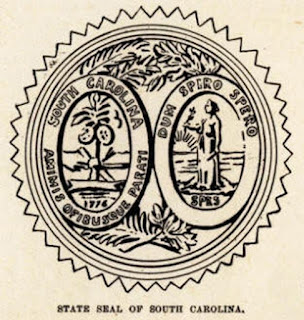 The Orlofskys based their information on a newspaper story about the Secession quilt published on November 24, 1916, in the Union Times of Union South Carolina. This U.D.C. Edition (United Daughters of the Confederacy) celebrated the annual convention of the South Carolina organization and printed a long feature on the quilt. 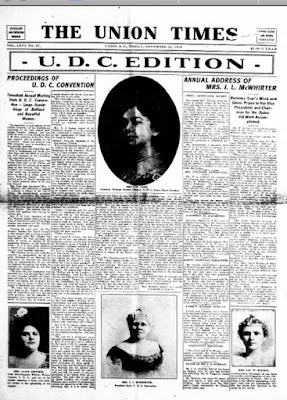 This quilt was designed and made in 1860 by Mrs. Philip Drury Cook of Fairfield County, S. C. Mrs. Cook was the grandmother of Mrs. John W. Cunningham and Mrs. Jesse Hix, both of Union county. Her maiden name was Jemima Ann Threwitts Williamson. She was born in Virginia, but in early youth came with her parents to Fairfield County. S. C., and was there married to Philips Drury Cook, who in the 60's was Gen. Cook of the Coast Artillery of the C. S. A.

Mrs. Cook was the mother of four children, one son and three daughters. The son, Capt. John W??? Cook of the United States army, was killed in the Mexican war, Of the daughters, the youngest died at the age of nineteen. The oldest married Walter Blount Williamson, the second married Col. Wm. Alston, both of Fairfield county.

While Gen. Cook was in service or the coast, Mrs. Cook carried on the plantation work with the help of an overseer. She spent the year 1860 in designing and making this historical secession quilt, which was given to her oldest grandaughter who is now Mrs. John W. Cunningham of Union county.

Later on she made a quilt of very beautiful floral design, which she gave to her second granddaughter, Mrs. Jesse Hix, of Union, but when Sherman's men burned the Alston home in Fairfield they cut up this quilt and used it for saddle blankets Mrs. Jesse Hix, who lived with her grandmother when a very little girl says she remembers that her grand mother put the quilt into the frame then rolled a big table under it and so sketched the entire design, and she remembers what a long, long time "Grandmother was making on it and how often the big frame had to be pushed to one side to make way for some other work."

The quilt is three yards square, and is made of fine white cambric, with very thin wadding and quilted in tiny stitches to form the outlines. The cotton picked from the seed by hand and bleached to snowy whiteness and carded by hand was stuffed with a bodkin through the sheer thin lining to raise the figures. This gives it a beautiful appearance and makes it really a work of art.

The design is historical and original. The centre represents an eagle whose outspread wings rest upon the inverted horns of two cornucopias from which are falling fruits and flowers. From the beak of the eagle floats a streamer hearing the motto "E pluribus unum." Upon the baclk of the eagle stands the Goddess of Liberty bearing a flag staff in her right hand, a sheaf in her left. Back of the Goddess to the right of the flag staff and just above the starry background is the word "Secession", beneath which is the date 1860. Or the left of the Goddess is the name ,Yamey, [Yancey?] while the ten letters in the name Washington form an arch over her head. Beneath this picture is the name P. D. Cook, the husband of the designer. In the beautiful border of flowers and beadinggs [?] that surrounds this centrepiece four arches are inserted, each bearing the name of the four governors belonging to the Nullification Period b1830-1837 Above the Goddess is "Butler,' below "Hamilton," to the right "McDuffie," to the left "Hayne." Around all this is a wide band of grapes and roses and in each corner two large cornucopias filled with fruit and flowers. Midway on each of the four sides is the State emblem, the Palmetto tree and shields, and on each shield there are two cunning little figures.

On the approach of Sherman's army this quilt was packed in a box with other family treasures and buried deep in the earth. When taken up it was badly stained and discolored, and repeated washings were necessary. This, no doubt, has made the letters and figures less distinct. It was on exhibition at the Charleston Exhibition in the Union county exhibit in 1902 as the following clipping from The News and Courier will prove:

"Union is without a doubt ahead in historical exhibits; the beautiful handmade quilt surpasses anything in design and workmanship on exhibition." Exposition Committee on Awards.

Mrs. Cook also made a dress for herself out of woolen threads ravelled from scraps of black cloth, carded and recarded by hand with white home-grown wool and woven on a hand loom into a beautiful gray cloth. They trimmed it with rows and rows of tiny buttons cut out by hand from a gourd and covered with black silk. After the close of the war when the women of Columbia got up a bazaar for the benefit of the disabled Confederate soldiers, Mrs. Cook attended this bazaar and wore this dress. It attracted much attention and Mrs. Cook at once donated it to the bazaar. It was sold for $50.00 in gold and the entire amount given to the fund for the soldiers." 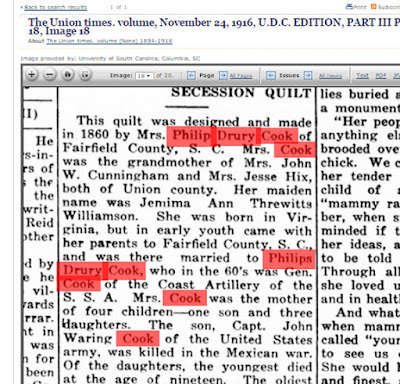 From Chronicling America, the Library of Congress newspaper site

See the newspaper here at the Library of Congress site:

And read the text here:

With Washington, the eagle and "e pluribus unum" and "Union" on the quilt, I have a feeling it stated out as a Patriotic quilt honoring the United States but while it was in the making, South Carolina seceded and the plan was adapted to honor South Carolina. It had to have taken a long time to make. I think the quiltmaker should be honored for her patience and persistence.

Barbara, anti-virus said this morning that your latest notification email from feedburner was a phishing email. I deleted it and just went to the blog which is fine. Just FYI.You might want to check with them if there's a problem.

I agree, amazing patience and persistence.