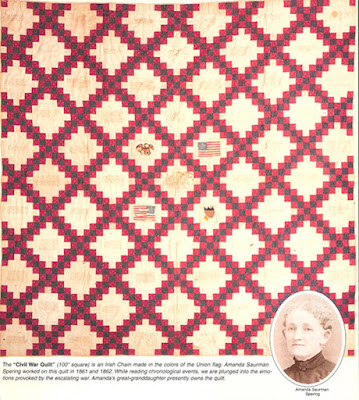 In my paper files of Civil War quilts I have a picture from the magazine Traditional Quiltworks #82 in 2002.

"The Civil War Quilt (100" Square) is an Irish Chain made in the colors of the Union flag. Amanda Saurman Spering worked on this quilt in 1861 and 1862. While reading chronological events, we are plunged into the emotions provoked by the escalating war. Amanda's great granddaughter presently owns the quilt." 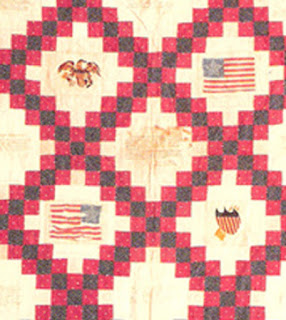 Amanda inked a sort of a journal on this quilt.
In the center:

"The Quilt is intended as a memento of the present times of civil strife and as such it has been made a brief record of the events of the War...February 22, 1862."

The Spering quilt was shown in a 1991 exhibit Made to Remember: American Commemorative Quilts when museum Spokesperson Lucinda Laird was interviewed: "One of the most unusual quilts is one that was made by Amanda Spering of Philadelphia, which was completed in 1862....It is a huge 102-by-102-inch quilt with 60 blocks. It chronicles the events from Lincoln's election in 1860 to December 1861." 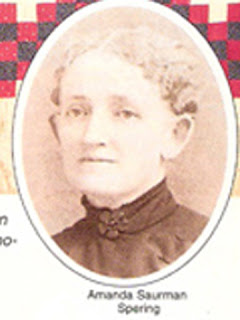 The quilt is also pictured in the 1991 exhibit catalog Made to Remember: American Commemorative Quilts. 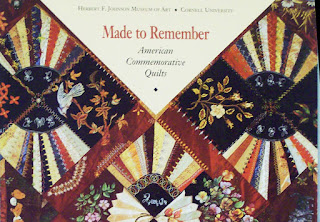 The Philadelphia Sperings were in the dry goods business. 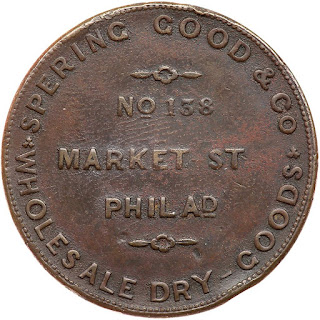 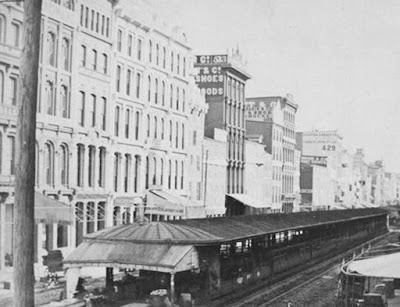 Amanda's diary quilt is a popular pattern we'd call Irish Chain. It's two alternating blocks, one a checkerboard of 25 squares; the other with squares in the corners. She included a few patriotic symbols and many inked words.

I found an article in the Philadelphia North American, September 2, 1899 that describes the quilt in detail.
"Perhaps the most valued relic of the civil war in this city is possessed by Mrs. Samuel Spering of 2226 Oxford Street...Two thousand patches placed in chain-link pattern....At the time this novel historical work was begun indelible ink was unknown [Not true]  and to inscribe each event in silk with a needle was a greater task than Mrs. Spering cared to begin...."

So she made her own ink.

"The last time this valued relic was displayed was in the Woman's Building at the Centennial Exposition of 1876. At that time it attracted wide attention, but its owner has declined to place it on exhibition since." 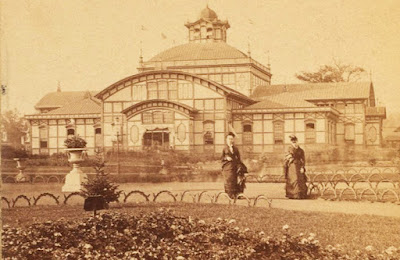 The Woman's Pavilion at the 1876 Centennial Exposition in Philadelphia 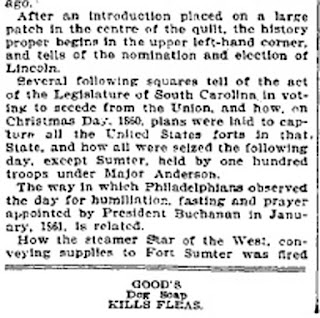 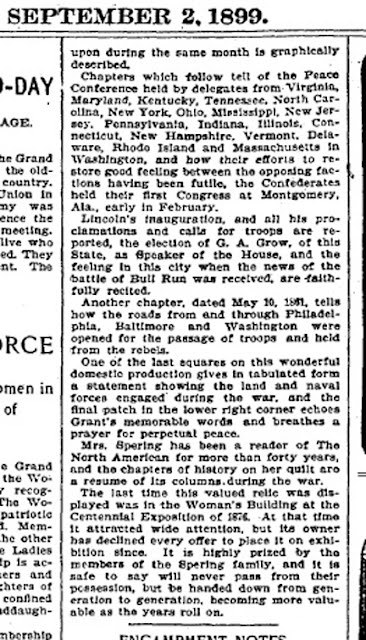 What a precious quilt. I can imagine this woman creating this kind of diary of the escalating war on fabric. Did she express her fear in a country in war or her engagement, or did she stick to the facts?

Thank you Barbara Brackman, for me it's always a treat to get up early on Sundays and read your posts about the American Civil War. When I told an American friend who would visit Philadelphia, PA, he replied that I would go to the place where he had more history per square meter. This year I will take five students and is the fifth time visiting the Pennsylvania. I am delighted with the quilts and their stories, with a wealth of detail that each of them has. I always tell to my students as you have so many treasures still to reveal to us. I live in Brazil, a region colonized by US immigration, there is a town called American in tribute to those who came here to plant cotton and tobacco in the year 1866. Another city that received many Americans and even has a museum with various objects is Santa West Barbara. It's amazing who these women left as a souvenir in their quilts and sometimes I wonder them doing and thinking of those who went to war and never came back and, it must have been difficult and painful for all those families. Thank you for all this stuff you weekly shares, I love. Sincerely, greetings from Brazil.

Greetings to you in Brazil Themis. Enjoy your trip to Philadelphia!