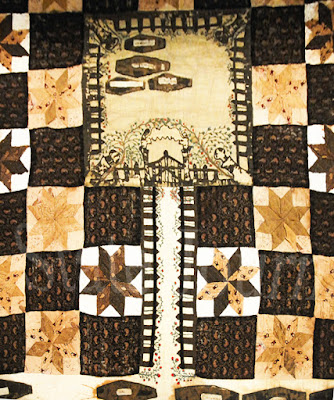 Quilt by Elizabeth Roseberry Mitchell (1799-1857)
Collection of the Kentucky Historical Society,
Donated in 1959 by her granddaughter Nina Aura Mitchell Biggs (1866-1968),
a local historian and writer.

I've been asked if the Kentucky Graveyard quilt would be an appropriate design for a Civil War reproduction quilt. I shall ramble on here. 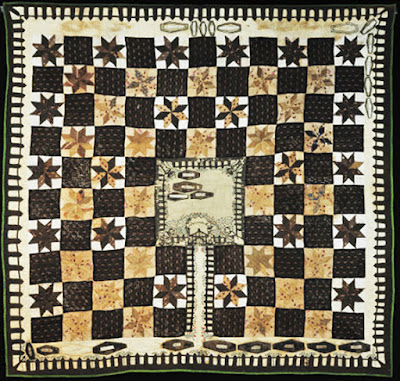 47 pieced stars and 20 coffins in the Kentucky Historical Society's quilt.

This famous mourning quilt is unusual but not unique. For years Elizabeth Roseberry Mitchell's medallion quilt picturing a cemetery and coffins in the center was described as one of a kind. But it isn't. There are two of a kind.

One of my theories is that people rarely make an amazing quilt like this out of the blue.There are sources and inspiration, possibly earlier and/or later quilts with related ideas.

In the case of Elizabeth Mitchell there are two related quilts: 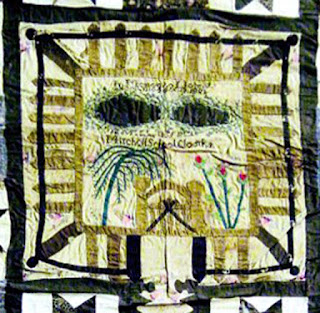 '
The graveyard in the center of the second Mitchell family quilt
(thought to have been made earlier than the other)
with two coffins, 45 stars and the words
"Mitchell School Clothes"

Quilt historian Linda Otto Lipsett found another quilt in the collection of the Highlands Museum and Discovery Center in Ashland, Kentucky. Another Biggs descendant had donated that quilt in the 1980s, but the link had not been established by the museums.
\ 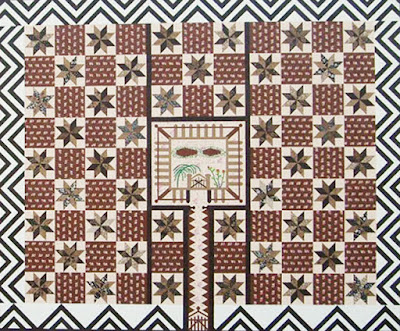 A mural showing the diagram of the second Mitchell quilt, painted in 2008 by
Denise Spaulding, Melanie Osborne, Gary Preston and
ABC Quilt Alley on the flood wall in Ashland, Kentucky, .

The mural artists took some liberties, according to the Herald-Dispatch:


"That quilt is 172 years old and it's really fragile, almost crumbling. So now people can see what it would look like and it looks really good. They reproduced it like it would have looked if it was new. It was as close as we could get to being the real quilt." 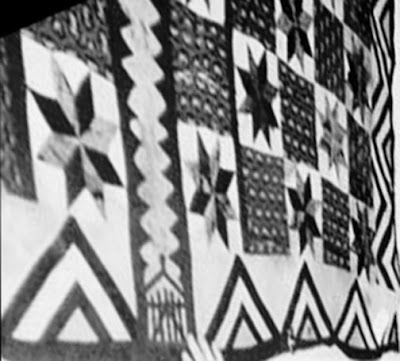 The actual quilt top shows the border of V shapes and the cemetery path
of dog-tooth applique along the bottom border. 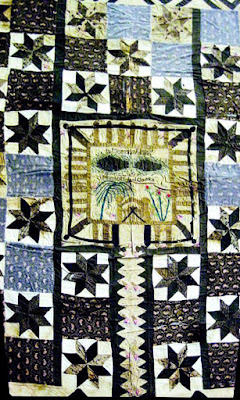 Family tradition is that Elizabeth Mitchell began the first quilt after she lost two-year-old John in 1836 and buried him in Monroe County, Ohio. Dissatisfied she began a second, similar version, perhaps when a second son died in 1843 at the age of 19. She made coffins for herself and other family members and basted them in the border. When they died she moved their coffins to the central graveyard. When she died in 1857 her daughter Elizabeth (1830-1867) moved Mother's coffin to the center.

The second version is quilted while the first is a top. 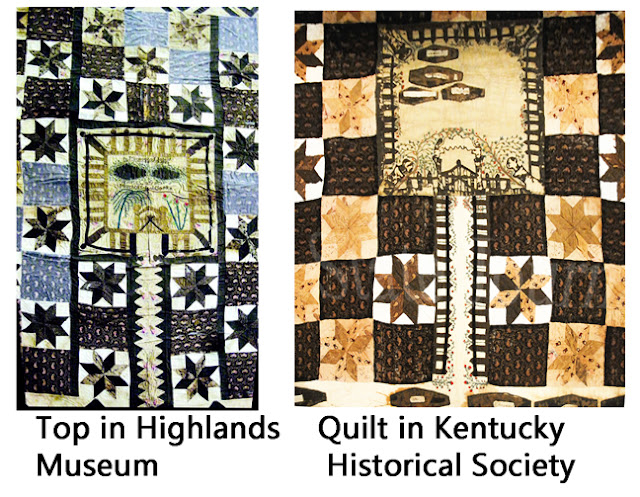 The top on the left looks like it has a blue paisley fabric in the alternating squares, but this is just a glare in the photo. Both quilts seem to be set with the same brown print. 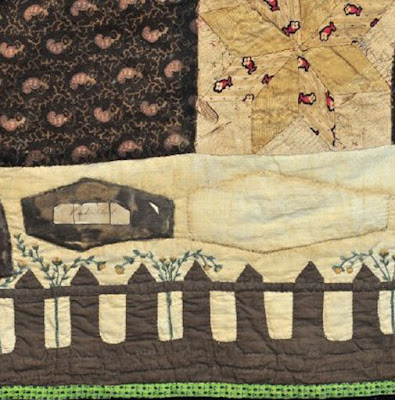 Kentucky Historical Society quilt.
The green calico binding seems in better shape than the rest of the quilt. 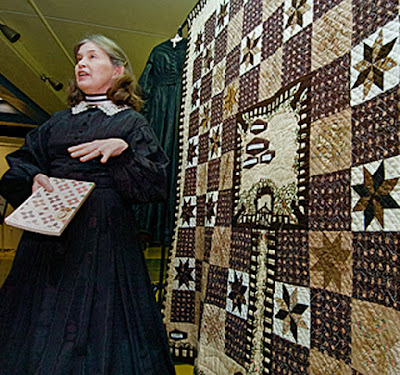 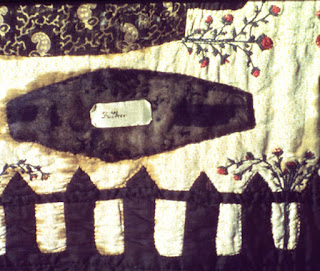 Coffin labeled "Father" in a photo from the Quilt Index.
http://www.quiltindex.org/fulldisplay.php?kid=1A-39-23A

How old are the quilts? Much of the online history dating them to the 1830s seems to be adapted from a five-page typed paper that Nina Biggs donated with the quilt to the Kentucky Historical Society. That quilt is pictured on the Quilt Index where the Kentucky Quilt Project dated it as 1850-1875. If so, it is the right era for a Civil War mourning quilt,although there seems to be no Civil War symbolism in the original pair. Certainly it is an effective and authentic mid-19th-century mourning image. 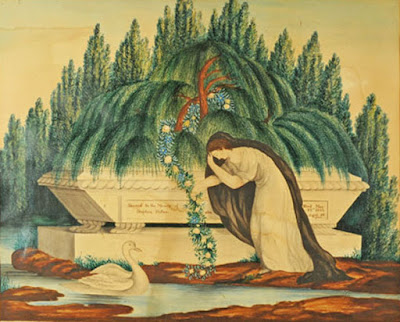 Silk embroidered, framed memorial for a man who died in 1833.
from Stephen and Carol Huber's online shop
http://antiquesamplers.com/memorial/index.html 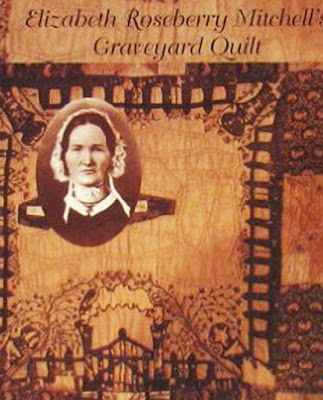 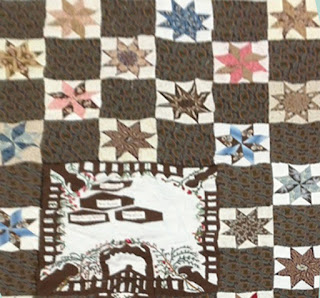 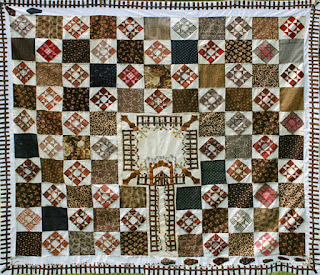 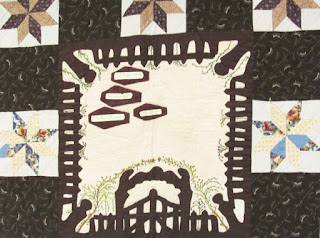 Detail of a copy by Hollis Taylor.

Fascinating quilt and discussion, Barbara. Thank you so much for sharing this.

Amazing... we today can be so detached from death. But until recently, folks lived without funeral homes etc. These quilts had a deep meaning to them.
Thank you for this post, history is fascinating, isn't it? :)

Another amazing story of quilt history.
Yes, folks did live without funeral homes. Often the coffin was displayed in home or church so the relatives and friends could mourn. The quilt probably helped her in the grieving process.

Fascinating post! Very interesting to see how the typical 19th-century graveyard motifs are rendered in quilt form. I hope you'll post if you run across any more of these.

As people moved on to newer territory and seeking opportunities they were forced to leave those cemeteries far behind. As always women found a way to memorialize and remember in some form of needlework.