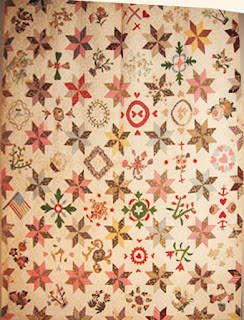 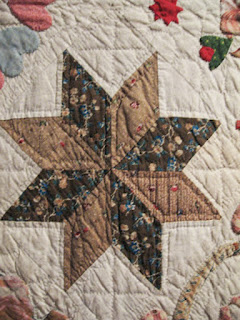 The sampler style, with red and green applique and a flag block, is consistent with that date.
But some fabrics looks to be older. This star for example
could be 1820s or '30s. 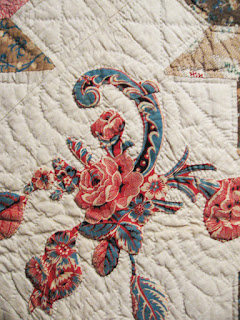 Alternate blocks are appliqued in both Broderie Perse (cut-out chintz) style
and conventional applique, another indication that parts of the quilt
may have been stitched decades earlier. 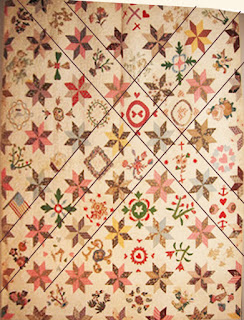 The set looks to be eight-pointed stars (perhaps pieced in the 1830s and '40s)
set on-point with alternate blocks of applique.

The quilt is a gift of Judy Lewis Simpson. She'd received it from a friend who was the great-granddaughter of the quiltmaker. The family attributes it to New Yorker Penelope Carpenter Stanley (1810-1900)  who finished it for son Jerome Henry Stanley's wedding to Ida M. Livenberger November 17, 1864.

Jerome and Ida were married in Tuscarawas County, Ohio. 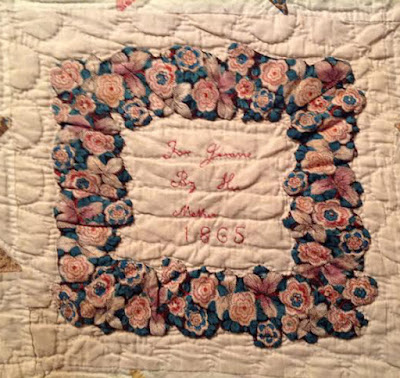 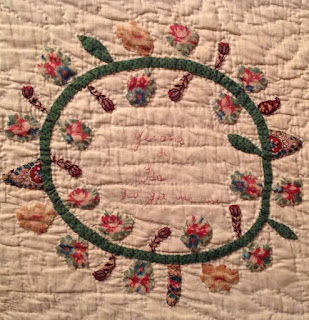 "Jerome and Ida Forget Me Not"

After the Civil War Ida and Jerome moved to Redlands, California, west of Los Angeles, where they are listed as orange growers in early 20th-century city directories. 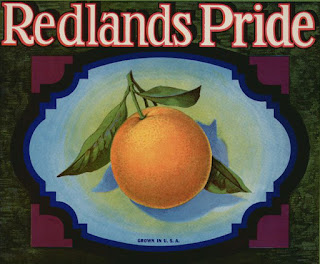 Redlands was the heart of California's citrus empire. 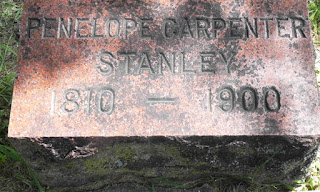 Over her long life, Penelope Carpenter Stanley migrated from Mamaroneck, New York to Wisconsin
where she is buried near Berlin. 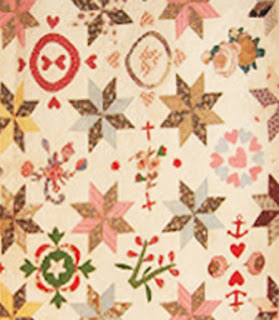 The quilt has several hearts, crosses and other symbols such as anchors---images we often see in the album quilts made close to the Civil War and soon after. We think of the Christian attributes Faith, Hope and Charity, but the same images also carried a weight of symbolism in fraternal organizations. 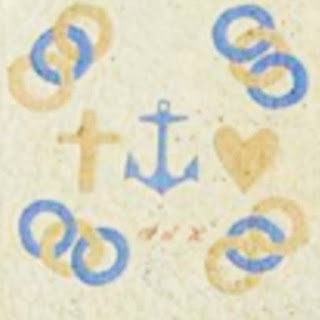 This block with a cross, anchor and heart is from
an 1867 quilt by another New Yorker, Susan Rogers.
The triple link chains are an important symbol in the Odd Fellows
fraternal group. 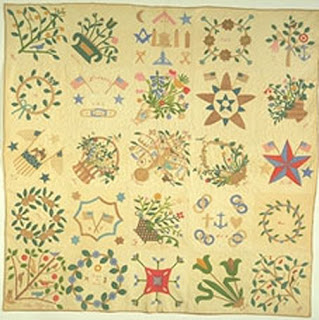 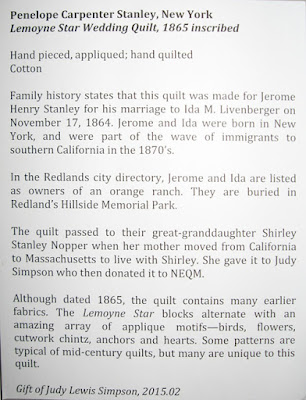 Curator Pamela Weeks at the New England Quilt Museum
is working on trying to find out more about their new quilt,
its symbolism and its maker.

Those of you who haven't decided how to set your Time Warp stars might
give Penelope Carpenter Stanley's quilt a look. Alternate applique blocks.....

What a sensational quilt! And a rare one with a New York connection. That quilt is so full of lovely old fabric and fascinating applique creations, it could entertain a quilt fan for a lifetime. Thanks for featuring it, I'll be looking for it in other publications and perhaps at the NE Quilt Museum.

Barbara! Thanks for featuring this quilt. It's currently hanging at the New England Quilt Museum as part of our exhibit of recently acquired pieces. Research continues! Best, Pam Weeks, Binney Family Curator, NEQM.

I just hung the Stanley Quilt last week in our Donahue Permanent Collection Gallery. The Quilt will be on display until May 15th.
Laura Lane, Collections Manager, NEQM

Hi all! I just added a few more images of this quilt to our Facebook page. https://www.facebook.com/NEQuiltMuseum/
Thanks again, Barbara!