Empty Spools
By Becky Brown
Empty Spools can remind us of the early months of the war when women set aside their sewing to cut up textiles for lint and bandages. After reports of the first bloody battle at Manassas/Bull Run, women North and South had a heartfelt need to contribute.

Sallie Brock Putnam, thirty years old, was living at her parents' home in Richmond. With two brothers who were doctors in the Confederate Army advising her, she organized friends to provide medical supplies for the Confederacy. Supplies included bandages, clothing, bedding and lint.


"Our women for a time suspended the busy operations of the needle, and set aside the more expeditious and labor-saving sewing machine, to apply themselves more industriously to the preparation of lint, the rolling of bandages, and the many other nameless necessaries which the signs of the times made apparent would soon be in requisition of the unfortunates which the chances of battle would send among us mutilated and helpless. No longer the sempstress, every woman of Richmond began to prepare herself for the more difficult and responsible duties of the nurse."

A hospital near Manassus, Virginia in 1862
Library of Congress
In 1861 Peterson's Magazine advised women to deconstruct linen textiles to make lint.

"Lint should be made of unraveled linen, new or old (the latter preferred), by cutting it in pieces of four or five inches square, which would be highly acceptable, while lint made from canton [cotton] flannel is irritating to the wound.”

Women on both sides abandoned their sewing baskets to participate in a "lint and bandage" mania, as Northerner Mary Livermore described it after the War.

"For a time it was the all-absorbing topic... 'What is the best material for lint?' 'How is it best scraped and prepared?' ... Every household gave its leisure time to scraping lint and rolling bandages, till the mighty accumulations compelled the ordering of a halt."

Doctors believed packing a wound with lint scraped (actually more raveled than scraped) from cotton or linen was an effective treatment method, although our contemporary ideas about infection consider the idea of packing thread into a wound unwise.
The pattern is BlockBase #2350, a variation of a block called Spools by the Ladies Art Company about 1900. Today people tend to call this design Empty Spools, an appropriate pattern to recall the ladies of Richmond who turned from their needles to nursing. 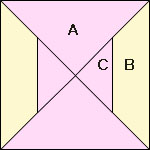 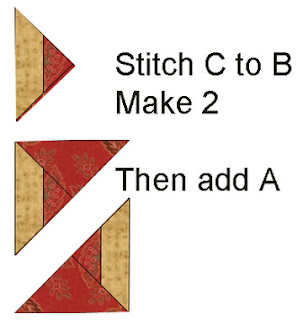 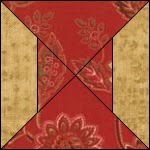 Read more about scraping lint during the war by Virginia Mescher in this PDF file Lint & Charpie: It's Not Your Dryer Lint.
http://www.raggedsoldier.com/lint.pdf
And read more about Sallie Brock here:
http://www.encyclopediavirginia.org/Brock_Sarah_Ann_1831-1911 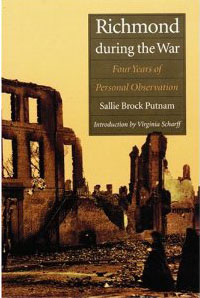 Richmond During the War: Four Years of Personal Observation by Sallie Brock Putnam, Virginia Scharff, editor. (Reprinted in 1996 by the University of Nebraska Press). The book was first published in 1867 so you can read it at Google Books:
http://books.google.com/books?id=S3wVAQAAMAAJ&pg=PR5&dq=richmond+during+the+war&source=gbs_selected_pages&cad=3#v=onepage&q&f=false 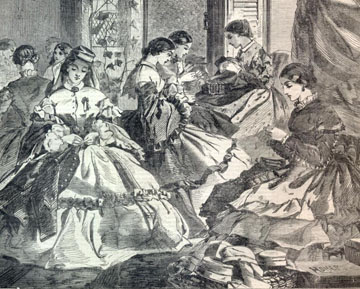 Winslow Homer
Harper's Weekly
June, 1861
After the lint craze subsided, women went back to sewing clothing and bedding. Note the cockade on the woman in the left forefront who is making a jacket and wearing a hat.
Posted by Barbara Brackman at 6:00 AM

Help! The link (http://www.barbarabrackman.com/31EmptySpools.pdf) takes me to a different pattern, instead of a template for the spool block! Lisa

Fixed it. Once I retype the URL it works. Very strange.

Thanks for another great block!

I love seeing the image of the hospital but especially enjoy Winslow Homer's illustration of women sewing for the soldiers. Not only do I enjoy seeing the patterns as you present them but I also enjoy the historical information you give with each weekly block...it makes for fascinating reading!

I love the way the striped fabric really makes the spool in this block. The history is wonderful. I can imagine how awful it must have been for the injured to have those dressing removed. No wonder they developed fevers and pneumonia. Thanks, Barbara, as always for the wonderful block and history!

Thanks for showing Becky's block made with a stripe fabric. I like that variation. One day I'll catch up on these blocks. I've got them all saved, but have a more 'pressing project' going, darn it!

Interesting to see all the work that Civil War era ladies had to do to support their cause.

I have completed my block and posted it on my blog along with a how-to.

This is a wonderful block! Thanks for sharing.
Deborah

I love your blog. Just wanted you to know how much I enjoy it, as a quilter and as a civil war re-enactor. Thanks for all your amazing efforts.