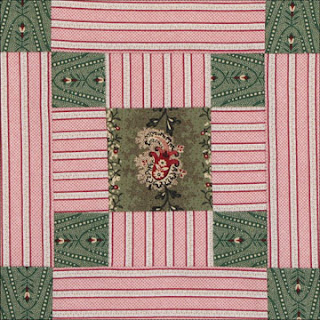 Irish Chain by Becky Brown
The Irish Chain remembers the Irish Brigades
150 years ago this week my great-grandmother Elizabeth Daly was born in Ireland, so it's a good week to recall the 140,000 Irish soldiers who fought for the Union during the American Civil War. 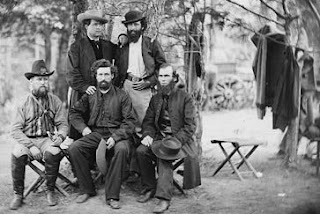 Irish Brigade soldiers and chaplains in Virginia
Army units often formed around shared ethnic backgrounds. Cities like New York and Boston with large immigrant populations formed Irish Brigades. A hard-fighting company was a point of ethnic pride whether the members were African-Americans, German-Americans or Irish-Americans. 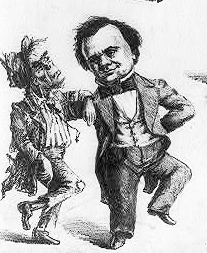 The Irish had been coming to the United States in large numbers since the 1840s. They were held in contempt by many, often portrayed as baboon-faced paupers as in this cartoon attacking Stephen A. Douglas for courting the Irish vote in the 1860 Presidential election.
Maria Lydig Daly was a well-to-do New York City socialite, active in the Sanitary Commission and remembered for donating flags to the the 69th Regiment of the New York Irish Brigade. No relation to my Daly family (as Maria, I am sure, would have been only too glad to tell you) she married a New York judge of Irish background. 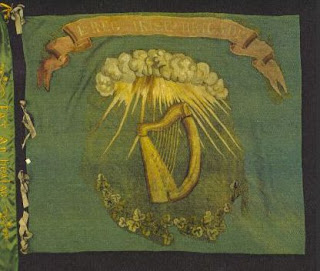 The "Tiffany" flag of the Irish Regiment
When the 69th needed a new set of flags, Maria Daly headed up a committee to replace them. She wrote in her diary in 1861:

"I have been busy today in assisting to raise some money for standards for the Irish Brigade, three United States standards and 3 green flags with Irish emblems and mottoes and the guide colors."

The flags were ordered from Tiffany's, which made flags (standards) as well as silver and jewelry. Maria Daly is remembered as the Irish Regiment's benefactor. In a 19th-century history of the regiment David Power Conyngham wrote a stirring if inaccurate account of them marching out of the City in the spring of 1861 (Maria didn't order the flags until the fall of the year).

"On the day of departure, after the regiment had formed into line in Great Jones street, they were presented with a splendid silk United States flag by the wife of Judge Daly. This appropriate present was received with cheers for the fair donor, and Colonel Corcoran requested Judge Daly to inform his lady that her flag should never suffer a stain of dishonor while a man of the Sixty-ninth remained alive to defend it." 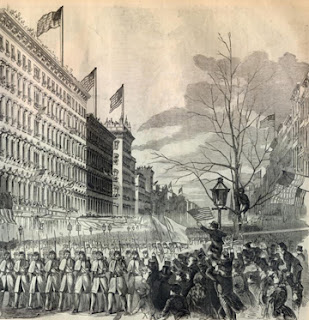 "About three o'clock the order of march was given. The regiment moved into Broadway amid deafening cheers; flags and banners streamed from the windows and house-tops; ladies waved their handkerchiefs from the balconies, and flung bouquets on the marching column. At the head of the procession was a decorated wagon, drawn by four horses, and bearing the inscription... "No North, no South, no East, no West, but the whole Union." 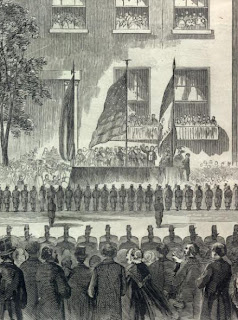 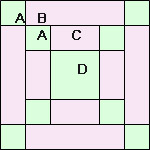 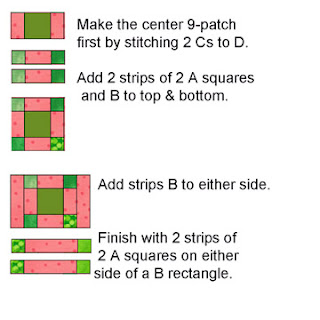 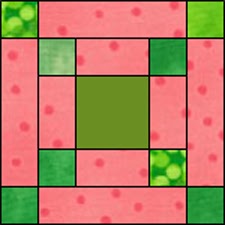 Like many other quilt pattern names, "Irish Chain" was a familiar phrase before becoming a pattern name. An Irish Chain was a surveying tool, a chain used for linear measure. Each Irish Chain was divided into 100 links with each link 10.08 inches. The whole chain measured 1,008 inches or 84 feet. 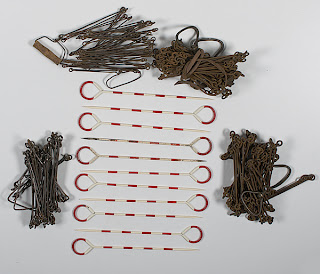 An Old Surveyor's Chain
The earliest reference I've yet found for that name for a quilt design is in T.S. Arthur's 1849 story "The Quilting Party" in which a character lamented that "young ladies of the present generation know little of the mysteries of 'Irish chain...' "
This block (#2023 in BlockBase) was given the name Single Irish Chain by the Nancy Cabot quilt columnist in the Chicago Tribune in 1933, but she was undoubtedly not the first to use that name for a nine-patch variation.
Read T.S. Arthur's 1849 story at Google Books by clicking here:
http://books.google.com/books?id=mB0tAAAAYAAJ&pg=PA365&dq=quilting+party+t+s+arthur&hl=en&ei=Q7LOTeHGMoj30gGEh4npDQ&sa=X&oi=book_result&ct=result&resnum=2&ved=0CFsQ6AEwAQ#v=onepage&q&f=false
Nostalgia for an "old-fashioned quilting party" was a staple of fiction even before the Civil War.
See some 1863 excerpts from Maria Lydig Daly's diaries by clicking here:
http://ny1863.wordpress.com/author/mld1863/
And read the diary in print:
Jean V. Berlin (editor), Diary of a Union Lady, 1861-1865. University of Nebraska Press, 2000.
Posted by Barbara Brackman at 6:00 AM

I live in Bend Oregon and love this site. In school we studied the California Gold Rush and the Oregon Trail, but I swear, the Civil War was briefly touched on. I have learned more from you than I ever did in high school about the war. Thank you so much. Keep up the amazing work.

One of my great-grandfathers came from Ireland and fought in the Civil war. After the war he returned to Galway.

Thanks for all of your posts! Irish chain has long been one of my favorite patterns.

Your blog is the highlight of my quilting weekend - get up, eat breakfast, read your blog and make the latest block - that's my schedule every Saturday morning! I would love it if there were a group or other site where we could post photos of our blocks so far. It would be inspirational. Keep up the wonderful work!

I too enjoy learning or relearning some Civil War History each week. Thank you Barbara. I did want to point out that if you are looking for more photos of blocks you can check out the flikr group. Barbara has a link to it on the Civil War Blog, just click on the lovely lady with the camera. Thank you again!

Barbara, Thank you for another wonderful snippet of civil war history!
this week's irish chain block is a delight too!! cheers, Marian

YAY No triangles! I'm learning to love them, but it's nice to have rectangles and squares for a change ;)

The Irish Chain is also one of my favorite blocks. I have completed my block and posted it on my blog along with a how-to.

Barbara - I have only just found your blog - and what a treasure trove it is!
I am loving the old photos and the history - and then making a block that has a story behind it.
THANKYOU so very much for your hard work.
Best wishes always
Catherine B xoox

Love that block and the story is amazing, wow! you've got me in, I will be following your blog as much as I can. Thank you so much for posting this really interesting blog, now I'm off to find some fabrics so I can have a play with these blocks, thanks again.

I have come over the water via Willow Valley Store, I also love history and have a great grandmother who was born in Ireland Macroom Cork in 1828 and came to Australia in 1844 on a ship full of Irish girls.Hannah married in 1854 to an English settler and became sheep farmers. Another gg gm came out with her parents as assisted immigrants Joseph and Jane arrived aboard the "Lloyds" ship 29/6/1850 at Port Jackson. Which had sailed from Plymouth March 19th 1850.
The ships passenger list gives Joseph's occupation as Agriculturist, Their religion was Presbyterian. They travelled with five children. Their second child Margaret who was born Donachmore Tyrone Ireland is my Great Great Grandmother.The family settled at Lyndhurst near Cranbourne in Victoria.

I'm very appreciative of your efforts in publishing this blog. I love it. It is inspirational. I also love learning more about the Civil War History. Thanks for the tutorials and patterns. I'm currently busy with the Dear Jane (see my blog: http://helendearjane.blogspot.com). I'm in awe of Jane Sickle who designed a very complex and beautiful quilt.

Thanks once again Barbara. I never knew the origin of the name of the Irish Chain block. I love learning all of the little facts you share with us.