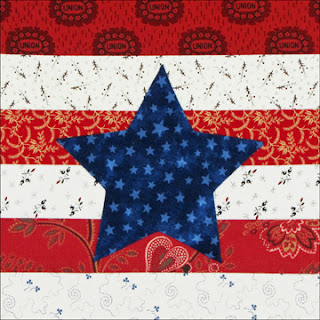 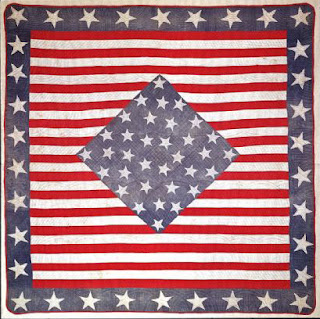 Mary Rockhold Teter's Stars and Stripes quilt
is in the Smithsonian Institution
In July, 1861 Peterson's Magazine published a color sketch of "The Stars & Stripes Bed Quilt". The full-page design showed half the quilt. It's the earliest color quilt pattern yet found in an American periodical. 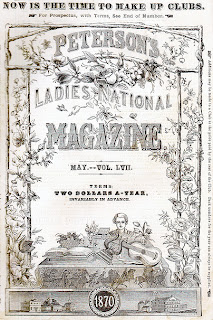 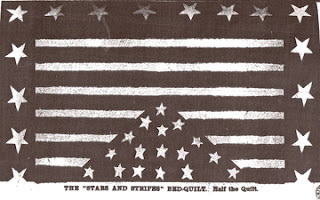 Here's a black & white photocopy of the microfilm
---the best image I could find.
The center showed 17 stars, half the official number. The new state of Kansas had recently joined as the 34th Star. Several quilters were inspired to make up the design. 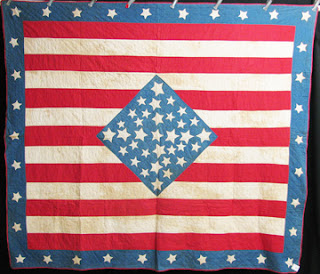 And each treated the center in different fashion. These two are from online auctions. 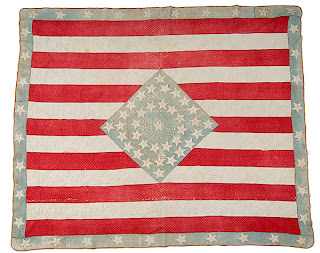 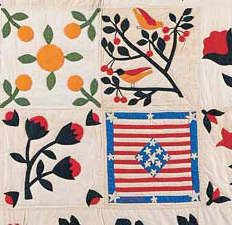 Above is a block in an appliqued sampler from the collection of the American Folk Art Museum. Because many of you followers are new to applique I thought it would be best to simplify this block. One star/ six stripes!
Cutting an 8" Finished Block 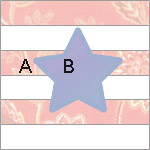 Add a seam allowance for applique.
Becky says
NEW LINK (as of 9/1/2011)
https://acrobat.com/#d=BjM5ACEM1NrLfvO6khRHfA
There's something wrong here with the link which I am trying to work out. Try this link.
http://www.barbarabrackman.com/30PetersonsFlag.pdf
And someone suggested-- -if the link takes you to the wrong page just type the link above into your web browser. 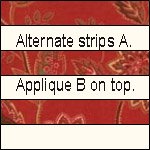 Each issue had a few color plates,
which was where the Stars & Stripes pattern was found.
Peterson's began publishing in 1849, using "Clubs" to expand their subscription list. 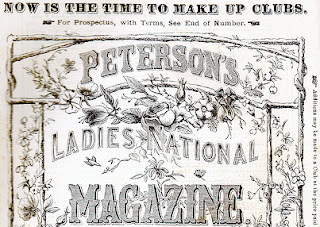 An 1870 cover highlights the subscription clubs. 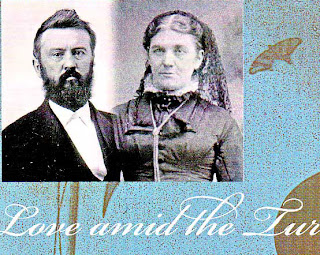 Mary Kemper Vermilion, living in Iowa with family while her husband fought for the Union, wrote him of all the neighborhood happenings.


December 1, 1863
Mrs. Paschal...is making a club for Peterson's Magazine and she came to get me to subscribe. I didn't do it. I told her I didn't care much for ladies magazines while the war lasts, and then there are other that I would much rather have than Peterson's....

Mary was a strong Union supporter, who apparently found wartime entertainment frivolous. Read her letters and those of her husband's in Love amid the Turmoil: The Civil War Letters of William and Mary Vermilion, Donald C. Elder III (editor) The University of Iowa Press, 2003. See more information by clicking here: 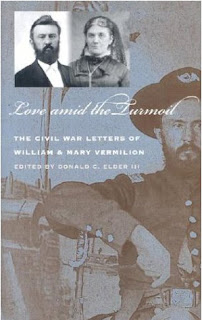 Find out more about Mary Rockhold Teter and her Stars and Stripes quilt at the Smithsonian Institution by clicking here: 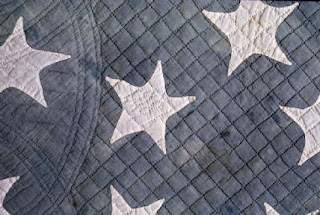 The link for the star PDF takes us to a Civil War Crossings pattern. There has been a mixup with the links.

Where's the star pattern? I clicked on the PDF and got a jelly roll pattern...which I liked but it doesn't help me with the star.

Hi,I too tried to find the star pat only to find it brought me back to the blog....Thanks,Pat Cl

I think I fixed the link problem. Sorry for the mixup.

Thank you, again for all the work you do to bring us this wonderful info.
I love this block!
Deborah

It looks like everyone is having fun with this star block, with so many variations!

Very interesting post about the magazines of the Civil War era.

I completed my block and posted it on my blog along with a how-to.

Thanks for the bit of applique! It's always welcome.

You inspired me to research what life was like in my hometown of Brooklyn NY during the War. I found this delightful letter that references soldiers and baseball from July of 1861 in the Brooklyn Public Library's online archives.
http://brooklynpubliclibrary.org/civilwar/cwdoc025.html

I love this weeks block! I can't wait to make it. The originals are so interesting with the stars in different arrangements. Thanks for posting one that is simplified. Very interesting about the magazines too.