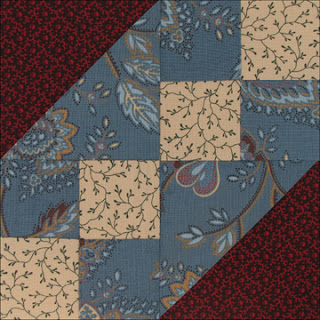 Railroad by Becky Brown
Railroad can symbolize the end of the Underground Railroad, a change in the strategy of escape from slavery.
At the end of May, 1861, Union General Benjamin Butler refused to return three escaped slaves to a Confederate officer, disobeying the Federal law known as the Fugitive Slave Act, which dictated that runaways must be returned to their owners. Because Virginia was at war with the United States, Butler confiscated the slaves, declaring them contraband of war. 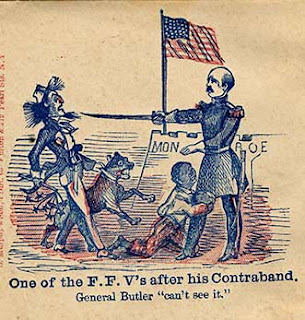 This Union cartoon lampooning one of the FFV's
(First Families of Virginia) was printed on an envelope.
Printers created a variety of humorous and patriotic stationery for both sides.
The news of Butler's decision spread throughout Virginia. Within two months he reported he was sheltering and feeding hundreds of refugees called "contrabands," who sought asylum with Butler's army at Fortress Monroe. 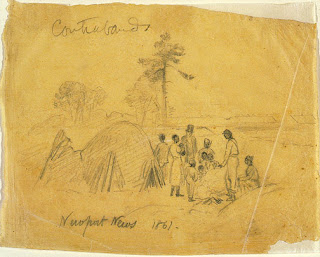 Contrabands, Newport News, 1861, drawing by Alfred R. Waud.
Butler, an attorney from Massachusetts, had long been an anti-slavery advocate. In his report on the contraband situation in July he wrote:


"I have, therefore, now within the peninsula, this side of Hampton Creek, nine hundred negroes, three hundred of whom are able-bodied men, thirty of whom are men substantially past hard labor, one hundred and seventy-five women, two hundred and twenty-five children under the age of ten years, and one hundred and seventy between ten and eighteen years, and many more coming in....
My duty as a humane man is very plain. I should take the same care of these men, women, and children, houseless, homeless, and unprovided for, as I would of the same number of men, women, and children, who, for their attachment to the Union, had been driven or allowed to flee from the Confederate States...." 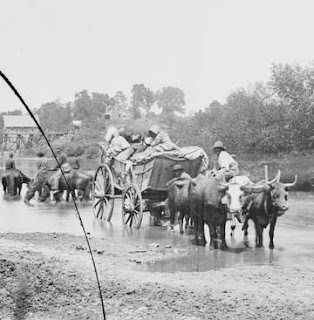 Timothy O'Sullivan photographed refugees fording
the Rappahannock River in 1862. People continued to seek shelter with
the Union Armies throughout the war. Many camps held thousands.
Butler's decision changed the refugees's status as well as their strategies. No longer forced to make their way alone to a Northern state, slaves poured into Union Army camps in the South. The days of the Underground Railroad were over as contrabands replaced runaways.
The Railroad block is BlockBase #1312 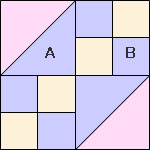 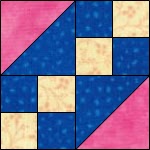 The block, which creates a strong diagonal line across the quilt, has many published names including Railroad, Railroad Crossing and Jacob's Ladder. 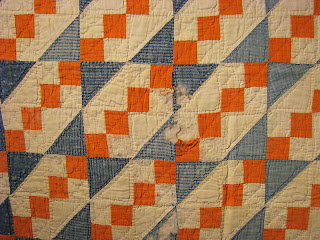 Ruth Finley gave the pattern the name Railroad Crossing in 1929 in her book Old Patchwork Quilts. Here's a tattered version from about 1900. Finley also pictured a nine-patch variation she called Underground Railroad in that book. 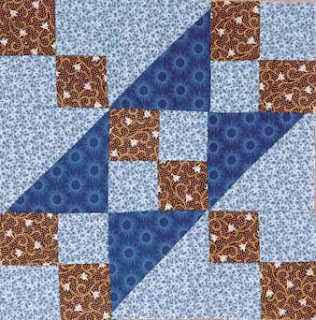 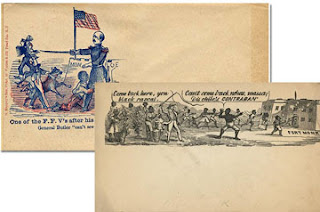 Two humorous envelopes on the subject of Butler's decision.
In the lower cartoon the refugee running towards Fortress Monroe shouts at his former master, "Can't Come Back No How, Massa. Dis chile's CONTRABAN."
The "humor" in the dialect may not translate today but the cartoons as stationery show the effect of Butler's ruling in the popular culture.
See more of these Civil War envelopes or covers in the collection of the Library Company of Philadelphia by clicking here:
http://lcpdams.librarycompany.org:8881/R?func=collections-result&collection_id=1148
Posted by Barbara Brackman at 6:00 AM

I am really enjoying reading the history around each block and the war in general. In Australia we were taught about the Civil War but not in great depth. I have been collecting the blocks and will make them one day. Thank you.

This was a nice, easy block to do. I posted a picture along with a how-to on my blog.

I am 74 in the us, and I did not learn all this in History class either. I love reading this stuff as it relates to quilting.

I was taught about the Underground Railroad, etc in several classes in public school in the 50s and 60s. I was intrigued. I was living in the South and frankly, i never connected those events to the blatant segregation that was all around me-----in those days, kids did comment, question, etc. But I saw and remember. Im so glad 'change is a-coming'. Im nearly 70, a white proud female and four of my grandkids are bi-racial. Some of my closest friends are international and are Muslun, Hindu, etc. All that being said (and im a retired teacher), i read about 15 tears ago that the stories told/shown during the Civil War was an urban legend and there is no documentation-----only passed down stories. Just wondering-----anyone know for sure. Id prefer to believe there were maps, houses, etc "seen" in these quilts. Thanks in advance.