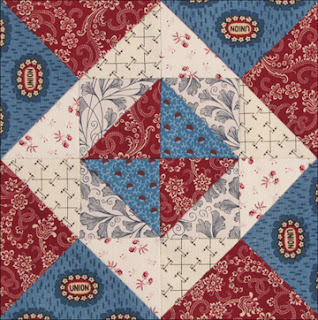 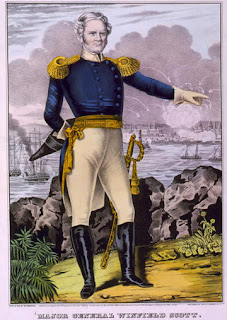 Major General Scott as a War Hero
1847
The Union Army's General-in-Chief was Winfield Scott, who had served with glory in the Mexican-American War about a dozen years earlier. Since then, he'd lost a Presidential election to Franklin Pierce and grown old and ill. 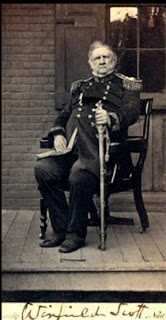 In the spring of 1861 Scott was 73 years old. A Virginian who had served under every President since Jefferson, Scott refused to join the Rebels as had Colonel Robert E. Lee and others. 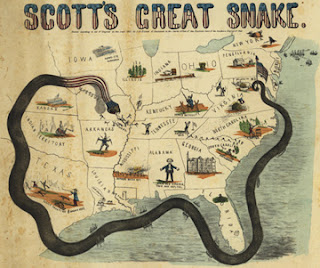 In May, Scott realized his Army would not be fighting a 30-day War and suggested a strategy to surround the Confederacy at sea and on the Mississippi River, squeezing its economic life by occupying strategic ports. The press, always ready to lampoon "Old Fuss and Feathers," derided the blockade as the "Anaconda Plan". Scott, too old to ride a horse, was soon replaced, but his blockade tactic remained an effective Union goal.

Parthenia Antoinette Hague wrote extensively about the effects of the blockade. Her 1888 memoir A Blockaded Family: Life in Southern Alabama During the Civil War is a comprehensive account of shortages and substitutes. Here she writes about making homemade shoes as the years went by and the South was deprived of materials and manufactured goods:

"Our shoes, particularly those of women and children, were made of cloth, or knit. Some one had learned to knit slippers, and it was not long before most of the women of our settlement had a pair of slippers on the knitting needles. They were knit of our homespun thread, either cotton or wool, which was, for slippers, generally dyed a dark brown, gray, or black. When taken off the needles, the slippers or shoes were lined with cloth of suitable texture. The upper edges were bound with strips of cloth, of color to blend with the hue of the knit work. A rosette was formed of some stray bits of ribbon, or scraps of fine bits of merino or silk, and placed on the uppers of the slippers; then they were ready for the soles....

Sometimes we put on the soles ourselves by taking wornout shoes, whose soles were thought sufficiently strong to carry another pair of uppers, ripping the soles off, placing them in warm water to make them more pliable and to make it easier to pick out all the old stitches, and then in the same perforations stitching our knit slippers or cloth-made shoes." 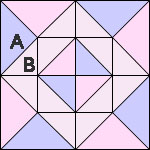 Cutting an 8" Finished Block
Use scraps of white prints (shirtings) to echo the idea of using up the smallest pieces.﻿
A Cut 1 medium and 1 dark square 5-1/4". Cut each into 4 triangles with 2 cuts.
You need 4 medium and 4 dark triangles.

B Cut 1 dark, 1 medium and 6 light squares 2-7/8". You might want to make the light triangles scrappy. Cut each into 2 triangles with 1 cut. 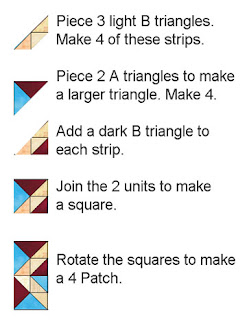 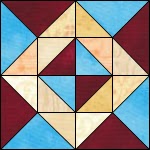 Blockade (BlockBase #1212) has been redrawn from the design of that name published in the Kansas City Star in 1938.
Read A Blockaded Family: Life in Southern Alabama During the Civil War at Google Books by clicking here:
http://books.google.com/books?id=v79huBKyzIsC&printsec=frontcover&dq=Parthenia+Antoinette+Hague&hl=en&ei=iSKiTeOxL8nPgAfu5XaBQ&sa=X&oi=book_result&ct=result&resnum=2&ved=0CDIQ6AEwAQ#v=onepage&q&f=false
Posted by Barbara Brackman at 6:00 AM

hi, I always use my scraps for this blocks in 4"
it is a perfect way!

Barbara,
I am so enjoying this weekly block posting. While I am a little behind in making them, I have them drawn up, fabrics decided and ready to go!
Thank you!

Thanks for another interesting looking block, with many color possibilities. I'm catching up, slowly.

An interesting block to sew. I have completed the block and posted it on my blog along with a how-to.

Oh my! I love your site!! I just found you on Pat Sloan's blog today. This is my favorite time in history and I was just wondering why I don't have any fabric from this era? Must fix this right away.
Thank you for all the wonderful info!
I will link to you from my blog.
I'm so excited to have found you!
Deborah

I'm not sure how to post your Civil War Quilts button. I don't see the code for it.
Thank you.
Deborah

I thought you might want to see a picture my BIL took at a memorial service in Fredericksburg, VA in a CW graveyard.