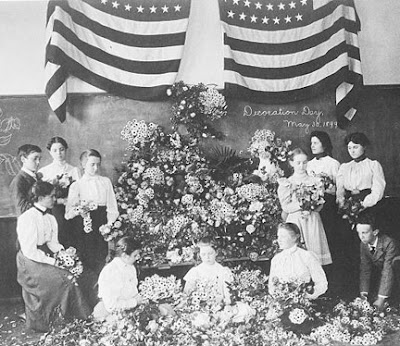 May 30th is Memorial Day this year. 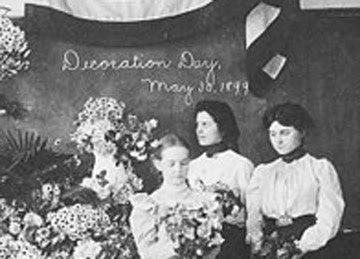 Readying floral tributes on May 30, 1899.
May 30th was the traditional day for a century or so for what used to be called Decoration Day.
Decoration Day began shortly after the Civil War with local ceremonies decorating the graves of Civil War soldiers with spring flowers. Many of the veteran's associations and the ladies' auxiliary associations dedicated themselves to memorializing the war dead with parades, speeches and floral tributes. 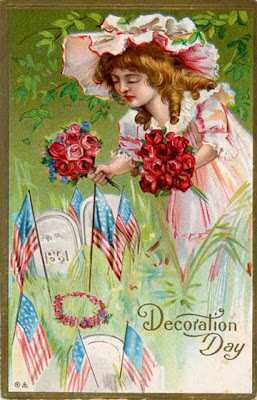 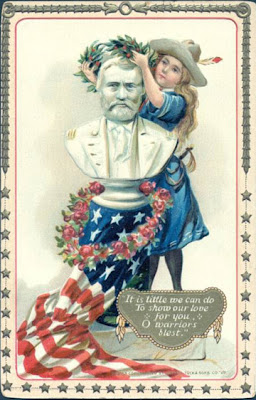 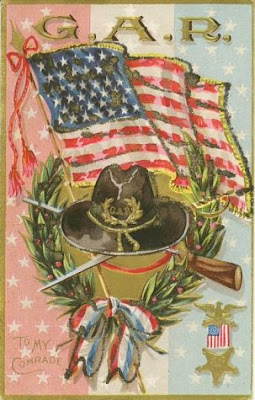 The GAR (Grand Army of the Republic) was the Union Veteran's Group that did much to promote a national decoration day, North and South. 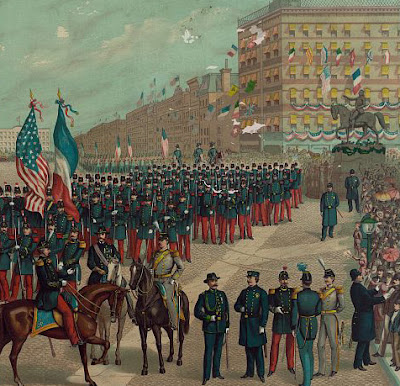 Decoration Day in New York City
May 30, 1884
French soldiers joined the Americans so French flags hang from the windows near Union Square. 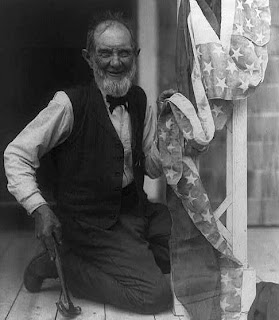 Hanging a flag, 1914.
As the generation that fought the Civil War aged, the meaning of the day changed. 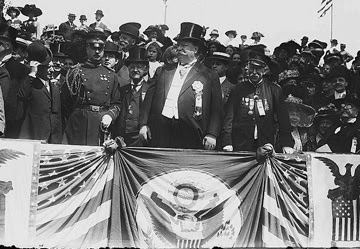 President William Howard Taft reviewing a parade in the teens. 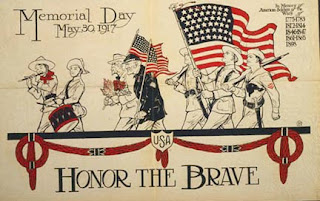 When America entered World War I in 1917 the name Memorial Day came into common use and the May 30th ceremonies honored soldiers who'd fought in any American wars. 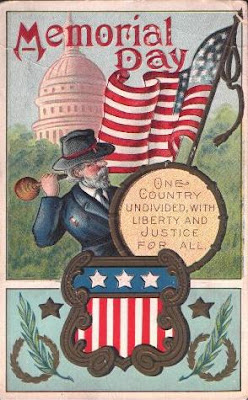 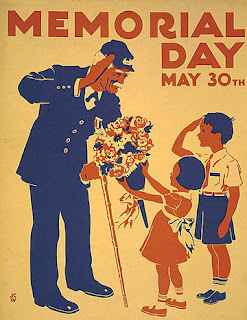 A poster from the 1930s
In 1967 the U.S. Congress changed the official date for the officially named Memorial Day to the last Monday of May. The Uniform Holidays Bill went into effect in 1971.
People in different regions celebrate the day in different ways. Many use the day to clean cemeteries, prune plants there and leave memorials to deceased friends and families. Parades and speeches honor soldiers now serving as well as veterans, and those killed in the wars. 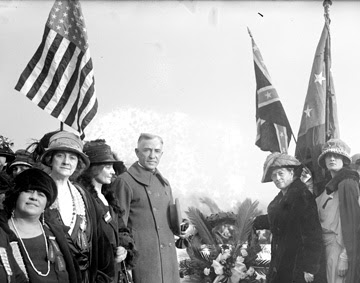 The United Daughters of the Confederacy at Arlington National Cemetery in 1924
This photo and those above are from the Library of Congress. The postcards are from online auctions.
Posted by Barbara Brackman at 6:00 AM

Thank you for sharing this information. I had not remembered the beginning of Memorial Day. Love reading and learning from your blog.

Your historical information is always great reading. I especially love the old post cards you were able to find. This is what Memorial Day is about, honoring those who gave their last full measure of devotion to this country so that we could enjoy the freedoms that we have. Thank you.
- Kathi P, RMCS, USN (retired)

I saw an elderly man yesterday with a poppy stuck in his cap. It took me back to the 1950's & 60's when Veteran's passed out poppies (for donations) and everyone had one. I didn't know they still did it.

Thanks to all Veterans and those currently servig to protect us.

Awesome post! Thank you.
God Bless our troops, past and present!
Deborah

Thanks a lot! In Spain we have no idea about all this. Congratulations Americans!

Thanks for the history lesson. My grandmother always called it Decoration Day. Didn't know when it changed to Memorial Day. I bought a poppy last year, but haven't seen them this year.

I am from the town of our nations first National Cemetary, Grafton WV. I don't know when the tradition started, but Grafton always has a 30th of May parade. It use to always be on the 30th, but of course now it is as you have said the Last Monday in May. When I was a child (and my mother too!) every school child had to march in the parade, wearing white, carrying a boquet of flowers and an american flag. We practiced marching for a month before the parade, using our recess time, and marching on the streets near our neighborhood school. We would march to the cemetary and place our flags and boquets on the graves in the National Cemetary. When I was in the 3rd grade I found out that my Great Grandfather was burried there. My dad helped me locate his grave the week before the parade and I placed my flowers there that year. I always tried to place my flowers on his grave from then on, but sometimes there was already a boquet there. The first 3 years of high school we did not march as a class because so many of the students were in other organizations that required them to march. It seemed to be so strange to be standing on the sidewalk watching the parade go by and not be marching. Our senior year in HS was the last time I marched in the parade. That was in 1976, and I still miss it. I'm not often home on the 30th, but my heart is always there.
Thanks for the history lesson.