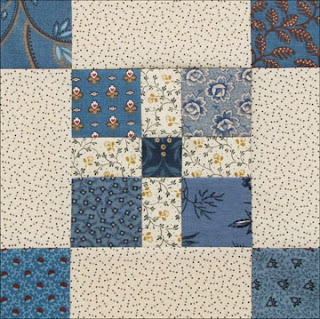 The Comfort Quilt
by Becky Brown 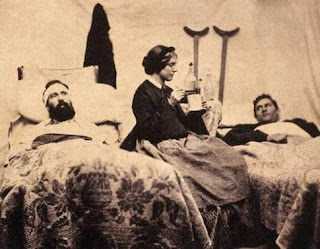 Woven comforters warmed many patients
The Comfort Quilt pattern, given that name in the Kansas City Star in 1940, has two meanings. The patchwork looks like a geometric woven comforter pattern---bedcoverings were often called comforts in the 19th century. The design can also serve to remember Dorothea Dix and the Civil War nurses on both sides who comforted the wounded and ill. 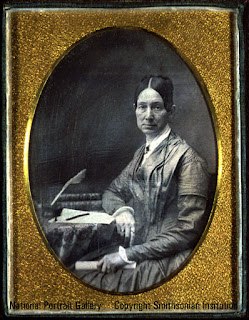 Dorothea Dix
From the National Portrait Gallery
at the Smithsonian Institution
On April 22, 1861 the Union Secretary of War accepted social reformer Dorothea Dix's offer to organize an "Office of Women Nurses." Despite disapproval from female society and from male doctors who believed women did not belong in hospitals, Dix recruited thousands. Women answered her call for nurses  who were "sober, earnest, self-sacrificing, self-sustained, calm, gentle, quite active and steadfast and willing to take and to execute the directions of the surgeons." 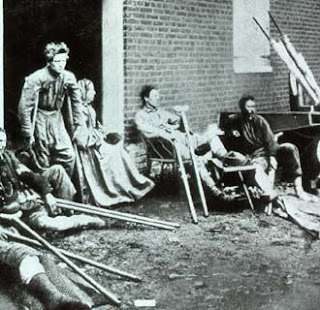 A nurse and her patients take the air
in Fredericksburg in 1864
Dix's reputation has suffered from the backlash of ridicule that often results from a woman's assuming a position of power. Diarist George Templeton Strong described her as a "philanthropic lunatic," and journalist Jane Swisshelm called her "a self sealing can of horror tied up with red tape." 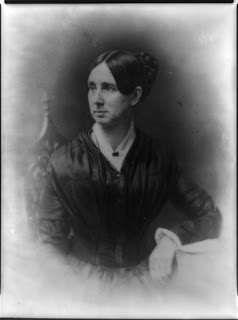 Dix devoted her life to reform,
first in the care of the mentally ill
and then with Army hospitals
Even those who respected her agreed she could be dictatorial and demanding. As nurse Georgeanna Woolsey put it,

"We have had an encounter with Miss Dix, that is rather the way to express it. Splendid as her career has been, she would succeed better with more graciousness of manner." 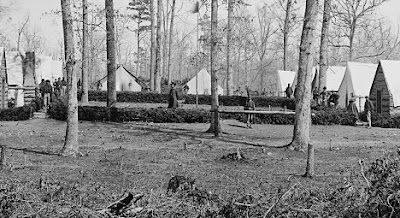 A field hospital with a nurse second from right.
She has been identified as Cornelia Hancock.
Don't tell Miss Dix about that hoopskirt.
Dix's Plan for Nurses outlined the rules:

"No women under thirty need apply to serve in government hospitals. All nurses are required to be plain-looking women. Their dresses must be brown or black with no bows, no curls, no jewelry and no hoop skirts."

Charlotte Wilson in soon heard of the nurse recruitment:

"I went this morning to the Cooper Institute to see the operation of an admirably organized society for the relief and aid of the sick and wounded soldiers. This society is in communication with Miss Dolly Dix who informs them of the wants of the ….There is an organized body of Nurses, being trained here in the Hospital. One of the first questions asked a woman who is ambitious to become a Nurse is whether she is over thirty. None under that age are accepted. It is wonderful how many find it impossible to confess they are over thirty."

We smile today with Charlotte at all the obstacles put in the way of the women who wanted to help. In this first month of the proposed 30-day war, no one had any idea what lay ahead in the hospitals. 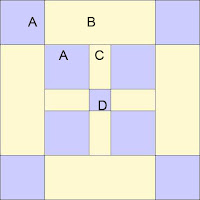 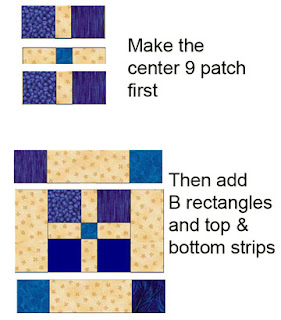 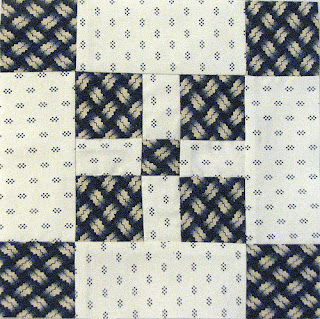 Here's a block from our Flickr group by A.E.A. Quilts 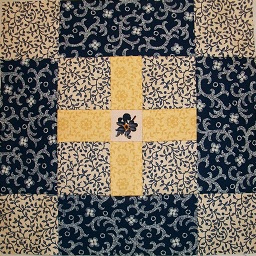 And one by Ellen from American Homestead
Posted by Barbara Brackman at 6:00 AM

Thank you for recognizing the nursing corps who did so much in the war to relieve what suffering they could. And for a block with no triangles this week.

Thank you for sharing all the information about the civil war. I hope there will be more blocks without triangles! :)

Thanks for the civil war and nursing post. When I visited Fredricksburg MD there was a Civil War Surgery/Medicine Museum. I can't imagine working in those conditions...these were some incredible women.

thank you for giving us a quilt block and history lesson.

Thankyou for recognising the efforts of the CW nurses!! I love the block too!!!

Beautiful!
it is so sad that we just don't have much of the Civil War fabrics here in New Zealand :-(

Good Morning Barbara, thank you for the Civil War Quilt project ....as well as the history to go along with them...very much appreciated....I am thoroughly enjoying each week....although have been stumped with some of my chosen fabrics...Warm Regards, Lyn

Thanks a lot again, Barbara !
I'm so pleased with this project !
Hugs from France,
Sylvie

A nice, easy block and a good history lesson.
I have finished this block and posted it along with a how-to on my blog.
http://lillianscupboard.wordpress.com/2011/04/24/civil-war-quilt-block-17-comfort-quilt/

I'm really enjoying this series of blocks and historical info. I just read "Union Quilters" this weekend which also has a medical side to the story...Your photos really put the words into perspective.

Thanks Barbara for another great block. Love the story behind it too - Hugs Nat

I would like to thank you for all the wonderful information you are providing along with your Civil War BOM, which is a work in itself. I am not able to make the BOM now, but I am greatly enjoying learning more about the history of the Civil War. It is too bad that my history teachers just taught names, places and dates, as that made me detest that subject in school. You make the topic come alive and I look forward to your post each week. In fact, I will truly miss it when the BLOG is finished.