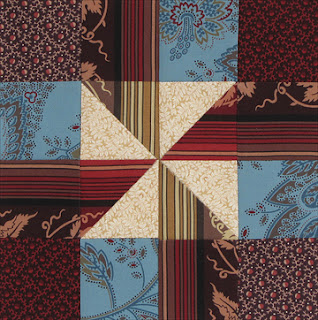 White House by Becky Brown
The White House block can remind us of , the capitol perched on the state line. As the Lincolns settled into the President's House during the first weeks of the War, Washingtonians were choosing sides and leaving the city. 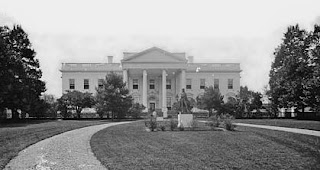 The White House
Photograph attributed to 1860-1880
Elizabeth Lindsay Lomax lived near the White House on G Street. A widow in her sixties, she was born in and married to a Virginian, an Army officer who'd died twenty years earlier leaving her to raise their large family. 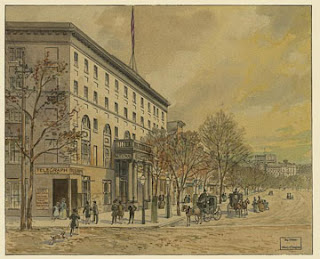 Painting by A. Meyer from the Library of Congress
The unfinished capitol dome loomed
over the city in the first years of the War. 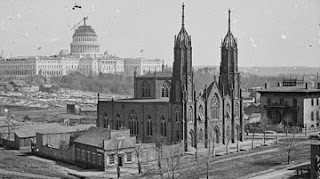 Trinity Episcopal Church
Early 1860s
Elizabeth's diary gives a vivid account of living in the nation's capitol in the week after . Her youngest son, 25-year-old Lindsay, was in the U.S. Army, a graduate of . He and his friend Jeb Magruder spent time at 's house that week.

April 16, 1861
Rained all night.
Reported again last evening that has seceded, but it is not believed.
Events crowd so fast that I cannot relate them in my diary.
April 18
has seceded!! Heaven help us.
April 19
Visitors all day long.
Many people are leaving the city. Great excitement and unrest.
April 20
Mary Buckler and Julia went to [Virginia] this morning to see Emily Page, and found difficulty in returning home, crowds everywhere and soldiers on guard and everything in a disturbed state. 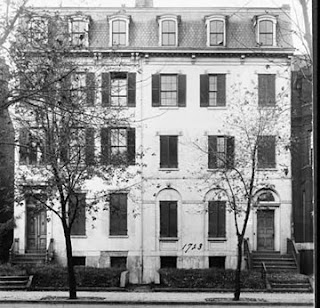 The Jefferson Davis house in Washington,
abandoned by the family in 1861. 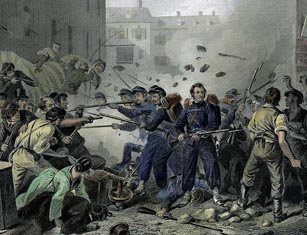 An artist's depiction of Massachusetts troops in
Baltimore attacked by Confederate sympathizers.
April riots in Baltimore and Washington
frightened residents into leaving the cities.

April 21
This has been a frightfully exciting day. Riots here and in Baltimore, many persons shot, also a heartrending day for Lindsay and for me. …This evening Lindsay told me that he had sent in his resignation; Colonel Magruder has also sent in his resignation from the army and will go to tomorrow where Lindsay will join him…

Lindsay's April 21st letter of resignation to his U.S. Army commander was published in her diary. Here is the first paragraph.

Dear [Lt. Geo] Bayard:
I cannot stand it any longer and feel it my duty to resign. My State is out of the and when she calls for my services I feel that I must go. I regret it very much, realizing that the whole thing is suicidal.... 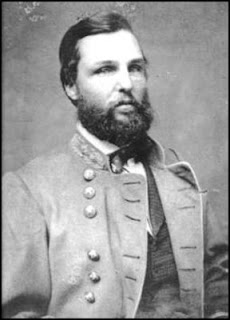 Lunsford Lindsay Lomax, 1835-1913
The White House pattern is a variation of mid-20th-century block, designed first by Nancy Cabot in 1937 and modified by the Famous Features syndicate. The 1930s blocks included small nine patches or stripes in the outer squares, a little too much piecing for an 8" block (It's BlockBase #1146). Here I've changed the pieced stripes to a fussy-cut striped print.
Cutting an 8" Finished Block 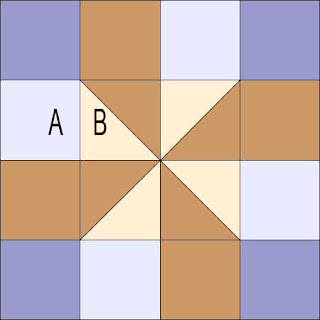 A- Cut 4 dark, 4 striped and 4 light squares 2-1/2". You want to fussy cut the striped squares by lining one up against the right side of the ruler and doing the same with piece B when you cut it. That way the stripes will realign when you piece A and B together. 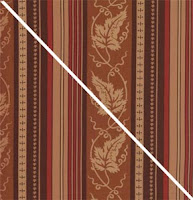 Cut each into two triangles with a single cut.
Use only the striped triangles that match piece A---you'll get one out of each square you cut. Save the other parts for another block. You need 4 striped and 4 light squares. 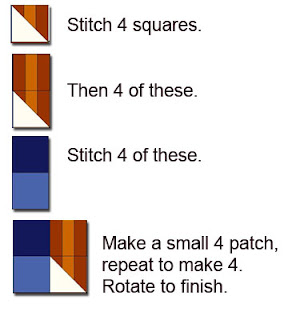 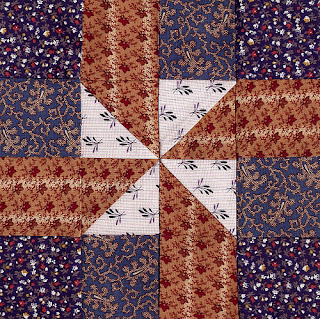 GigiBrod's block from the Flickr group
Elizabeth Lomax's diary was published in 1942.  It's not available online (it IS on the subscription site Ancestry.com) Your library may have a copy.


Elizabeth Lindsay Lomax, Leaves From an Old Diary, 1854-1863. Lindsay Lomax Wood, editor. Dutton, 1943.
Her son Lindsay went on to become a Major General in the Confederate Army. He survived the War to become president of the school we call Virginia Tech and active in many veteran's associations and causes. 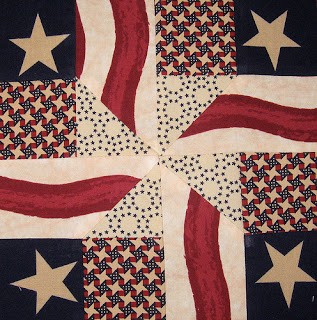 An updated look with a stripe by LJ Bush from the Flickr site with a new pattern piece combining A and B.
Posted by Barbara Brackman at 6:00 AM

Thank you for another interesting block. I'll have to look through the stripes to see what I can find for this one. I can only imagine how hard it was for so many southerners in the north, trying to decide what to do.

Thank you Barbara, for your freely given time and effort on this blog. Many of us are not doing the blocks but are muchly enjoying 'the woman's take' on the conflict.

Leaves From an Old Washington Diary is available at ancestry.com. Some of the readers may have a subscription to their service.

I'm realy enjoying your colourful American history. I grew up reading American historical novels like Frances Parkinson Keyes, Louisa Alcott etc and these stories of yours bring it all back.

Another wonderful post and block. Thank you, damecupcake, for the information on Old Washington Diary on ancestry.com. I do have a subscription and will check this out.

I have finished my block and posted it on my blog along with a how-to.
http://lillianscupboard.wordpress.com/2011/04/17/civil-war-quilt-block-16-white-house/

Barbara, I found your blog last Saturday, and just finished up my blocks today. Now that I am caught up it will be tough to be down to one a week.

Thanks for the blocks and the history.

I sewed tjis blocks twice, but I don't like the result..will sew another in the next days!