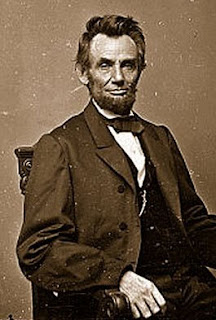 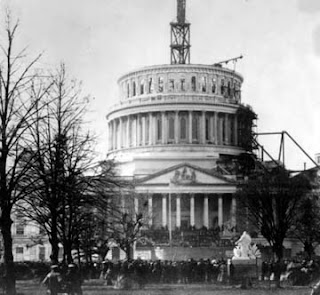 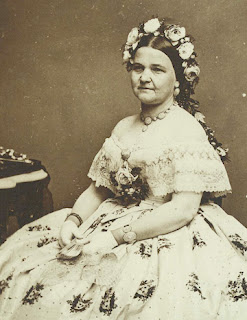 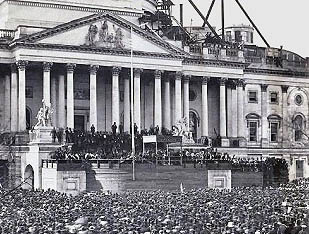 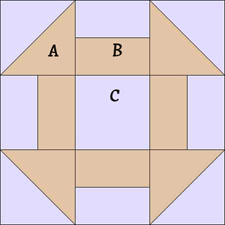 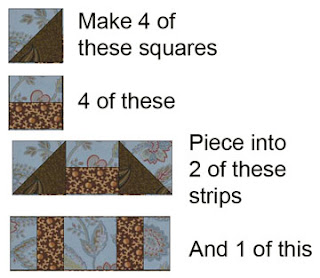 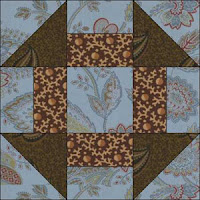 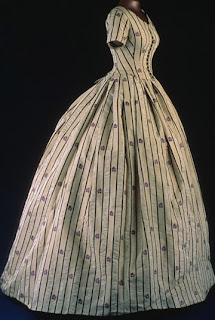 Another of Mary Lincoln's silk dresses from 1861.
This one is in the collection of the Smithsonian.
Posted by Barbara Brackman at 6:00 AM

Thanks Barbara, for another wonderful block. I laid my 9 blocks together tonight and they all look great. I'm really happy with them. Thank you - Hugs Nat

I love these snippets of history that you share with us and particularly the personal stories. Thanks so much!

This is the first thing I check every Saturday morning. Thanks so much.

Thank you so much! And for the photos - they fit perfectly into *another* civil war project I'm doing!

Bravo! This is one of my favorite blocks! And I am loving all the history lessons I am getting every Saturday morning! The first hand account of Lincoln's inauguration plus those behind-the-scenes glimpses into the goings-on are just wonderful. This has been a fun little project.

Thanks for another wonderful post..and block pattern. I so enjoy the history of the people and what they did and how they lived. That's the History I want to know. When I was in school it seemed like History was just memorizing battle places/dates? Very boring!

I was in Washington in October and went to the Lincoln exhibit at the Smithsonian as well as Ford's Theatre. It brought him more to life and Mary Lincoln as well.
Thank you for these blocks-we should never forget our history.

We saw several of Mary Lincoln's dresses when we were able to visit the Abraham Lincoln Presidential Library and Museum in Springfield, Illinois two summers ago. If the one in which she's pictured is of the scattered embroidered violet flowers on white, we saw that one too. I've been a Lincoln admirer since childhood, and the museum was an amazing experience. One of my daughter's favorite places was "Mary's Closet".

I'm glad that you get up early on Saturday mornings, it is always the first thing that I check. I am also very thankful that people kept such good letters and journals for us to get a glimpse into history.

Barbara---I am just starting with you on the Civil War quilt, so I will have a little catching up to do. Two weeks ago I was at the Texas Civil War Museum in Fort Worth, what a wonderful display. They also had a sections of dresses,beautiful dress and the most I have ever seen in one place. I put some pictures on my blog Sugarland Quilts, you have to go back about two weeks, around Feb 22nd. Thank you for putting these pattern up for us

I'm just starting to make my blocks so have a ways to catch up. I really enjoy reading the little snippet of history each weekend.

Is it another week already? I'll have to find a flower print worthy of signifying a silk dress!

Look forward to and love your history posts..
I'm Down Under, very interested in the civil war era history, this is a great way to learn about it, and make a block to commemorate that time.

I was using the cut and paste method to come up with a document that I could use to get the pattern. I have found an easier way and don't have to create a document or cut, paste or anything. All I do to print it out is: go to file, do print preview, look and decide what pages I want to print, hit print, and tell the computer which pages I want to print. Usually, I print just the one with the directions on it...I hope this helps someone else. thanks for the wonderful patterns and stories, I am really enjoying doing these lovely blocks.

hi Barbara
thanks for this wonderful blocks.
I will figure out how to make 4" blocks.
greetings from Germany
Claudia

Hello Barbara,
Thanks for another block.
Hugs, Carmen Mª.

Love the picture of Mary Todd Lincoln. I have completed the block and have posted it along with a how-to on my blog.
http://lillianscupboard.wordpress.com/2011/03/06/civil-war-quilt-block-10-lincolns-platform/

Thankyou for another lovely block and for the history lesson. My goodness! Mr C. Bowditch was a busy man!!!!, I was exhausted just reading through all his interests and organisations he belonged to!!!

I just found your blog and I love it! As much time as I spend on cyberquilting, I can't believe I haven't encountered it before. I own several of your books and have admired your work for a long time and I can't wait to get caught up with everyone else on this block of the week. I've also shared YOUR blog in MY blog... I know several of my followers will enjoy this as well. Thanks!

I love this sampler. The first thing I do every Saturday morning is print out the new pattern - sometimes I even cut out all the pieces before breakfast!

I'm truly enjoying this project. Thanks so much.
Textile diva.blogspot.com

hi girls
I have now finsihed all 10 blocks in the last days , you can see them on my blog:
http://claudiaquiltsblog.blogspot.com/
now I have to wait for saturday!!
happy sewing
Claudia

The play promises to be intense tunf as drums and vocals are added. Another plus is that though the new guitar is awesome you do not have to purchase it to play. If you have the earlier version of the game, the http://magnum4dlive.com/tag/tunf/ guitar will be compatible.