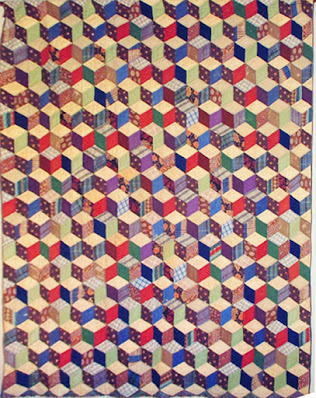 Several years ago I bought this quilt from a couple
who had purchased at a church bazaar in Westchester County,
New York. 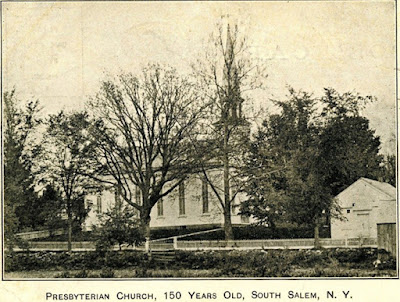 As they recalled, they found it at a sale in 1971 at the Presbyterian Church of South Salem where it had been donated by the "grande dame" of the area Miss Constance Hunt of nearby Waccabuc. 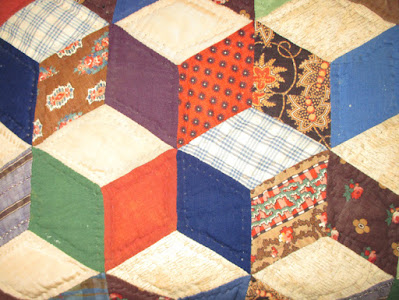 I'd call it a Tumbling Blocks Quilt, pieced of one shape---
a 60 degree diamond.
The quilt was a family heirloom with a tale. Miss Hunt who lived from 1894 to 1985 told the buyers that the maker was her great-aunt but that woman's name was not recorded. She stitched the diamonds together in 1864 while her fiance was fighting in the Civil War in anticipation of their wedding but when he returned she decided not to marry him so she wrapped the quilt in newspapers and stored it in the attic. It remained in the attic for a century until Miss Constance, looking for a nice donation for her church, retrieved it. 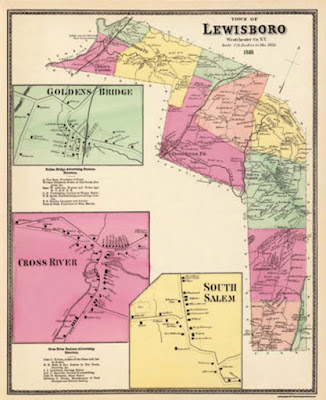 Constance Hunt, a relative of many Hunts and Meads in the Westchester County township of Lewisboro, had several great-aunts, sisters of her four grandparents, some of whom lived in Ohio but most in Westchester County. Constance's mother Annis Mead Hunt attended Oberlin University, a member of the class of 1891 and moved to New York after her marriage. 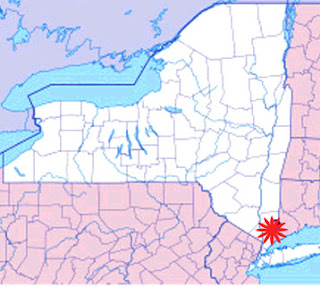 Lewisboro is just west of Connecticut and north of
the Long Island Sound.
I've gone back to those great aunts born in the 1830s and '40s who might have been living at home with their parents during the war but found no likely single woman of that generation. Perhaps the maker did not marry her fiance because she had fallen for another man and married him after the war. Hannah Mead Howe born in 1834 is a possibility. She married Seth Hoyt who owned a flour mill in Cross River after the war, but then one has to wonder why the quilt didn't go with her when she went to housekeeping.

White Plains Journal, 1985
Newspaper article about Constance Hunt's memories of her Aunt Carrie Hunt's picnic chicken recipe. This Aunt Carrie, although she remained single, was born about 1860, too young to have a fiance fighting in the Civil War. But perhaps she was the maker. 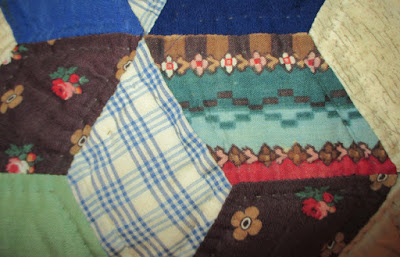 Is the quilt old enough to give the story credibility? Was it made in the 1860s? Most of the fabrics are printed wools, the delaines so popular for clothing in the 1860s. Delaine is a mixed fabric of wool and cotton related to the wool and silk combination challis. The mixed fabric takes dye very well, which explains the vivid colors. 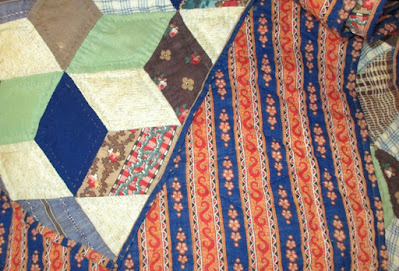 The backing is one striped wool and cotton combination fabric.
Delaine garments were quite the fashion in the 1840-1870 years. 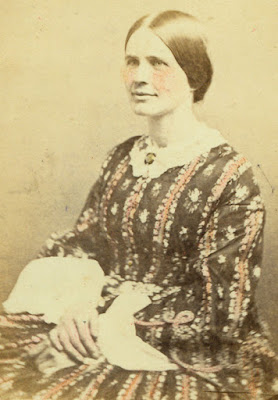 Unknown woman in a dress that might be a striped delaine
However, most of the delaine quilts one sees (it's often used in log cabins) date to the 1870s and '80s, just the right date for Aunt Carrie Hunt to be collecting out-of-fashion dress scraps after the war. 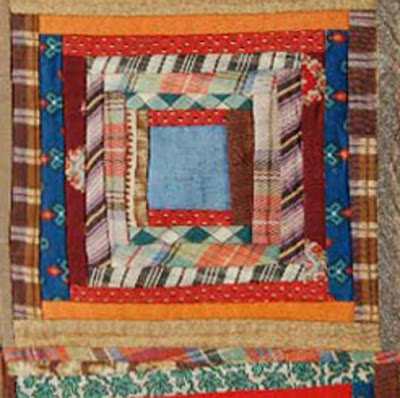 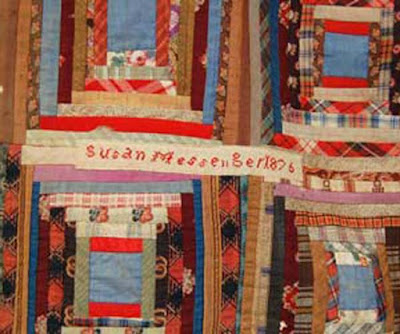 I wish I had more information about the maker and the Civil War story but seven years of poking around online has produced no real candidate for a maker. If it's an 1870s or '80s quilt I guess it doesn't matter which of Miss Constance's great-aunts made it. 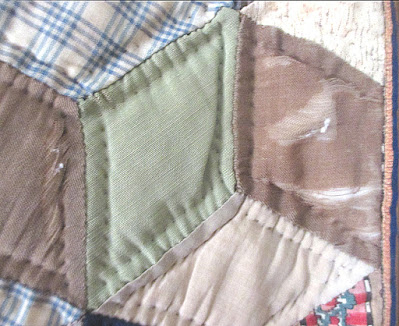 A couple of weeks ago I asked 5 Know-It-All Friends of mine to look at
it. We did a recording of our session that you can watch here at YouTube.
My quilt goes first:
https://www.youtube.com/watch?fbclid=IwAR0cqvZC7XuQp8V-9CMCfWWQYOUsZ-hvsB4dA_Ht5gzMCOneofsdNSMvEJs&v=r2w-7lqw76I&feature=youtu.be
Julie wondered why it is only this one piece of brown fabric (perhaps silk and wool crossed) that is insect damaged. Nearly every piece of that brown is chewed but none of the other wools. Why?
We may be know-it-alls but we didn't know. Julie says she often sees that in Amish wool quilts where one fabric was exceptionally tasty.
I'm afraid my Civil War quilt (like most of them) probably has no accurate Civil War story. I was surprised at how long I clung to the story before I faced the reality that the quilt is probably from after the Civil War. You know how it is when you want to believe something.
Oh well, I do love it. 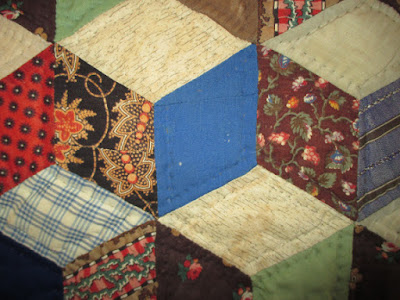 It's in good shape even though it spent a century in an attic wrapped in
newspapers (and lunch for some long ago insects.)
Posted by Barbara Brackman at 6:00 AM