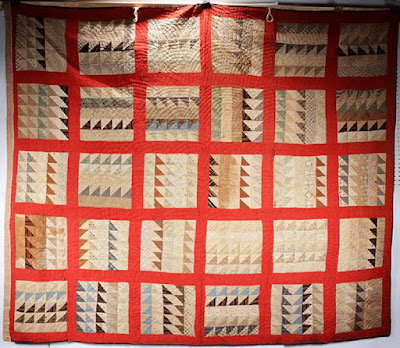 I believe it sold for quite a bit more than the estimate in 2017 and I hope you didn't buy it. It is obviously a 20th-century quilt based on fabrics and style. That red sashing with it's orange cast should have been a literal red flag to anyone hoping to purchase an actual quilt made by enslaved people in the 1840s. Reds leaning towards orange tend to be 20th-century synthetic dyes. Nineteenth-century Turkey red would have a bluer tint. 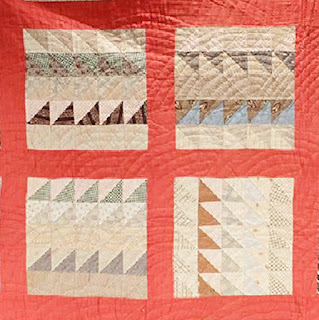 Most of the triangles are of rather muted solids, checks, plaids and simple prints
that look to date from the 1900-1930 era. The quilting in fans is also another
clue to 20th-century style. 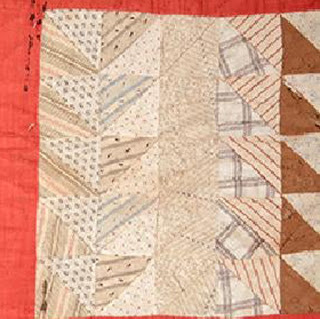 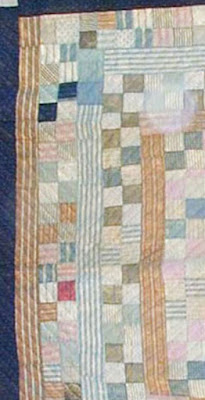 As in this quilt dated 1911 in pencil 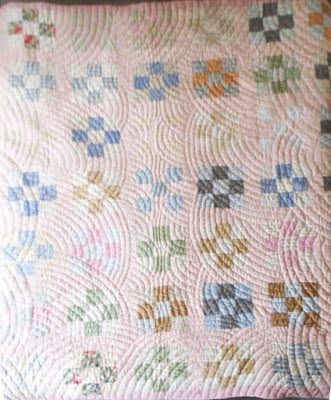 Or this one signed "Alma, 1917" quilted in the same fashion. 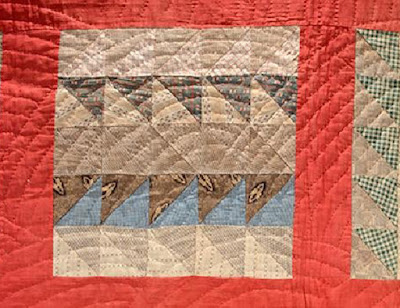 There do seem to be a few older print like the medium brown
and purplish brown above. These could date to the 1840s but you date
a quilt by the latest fabric not the earliest, and there is nothing about
this quilt that makes it look like it was made when that brown print was popular. 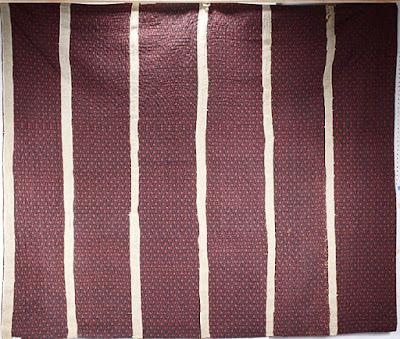 The reverse is rather unusual, strips of white pieces alternating with patches of a foulard-style print that again may indeed be from the mid-19th century, a recycled skirt perhaps. 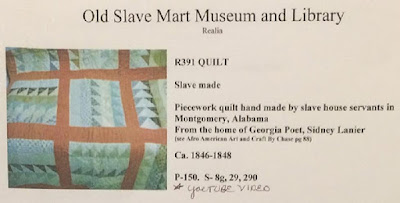 The quilt has a history, however dubious.
"Made by slave house servants in Montgomery, Alabama.
From the home of Georgia Poet, Sidney Lanier. 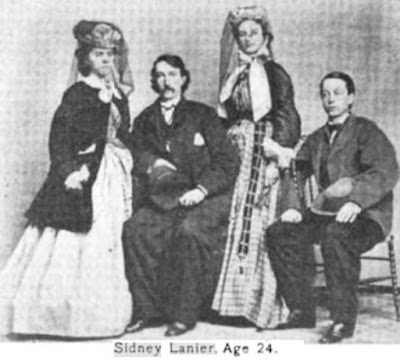 Sidney, probably with the mustache, around 1866.

Sidney Clopton Lanier (1842 – 1881) has the glory of being crowned  "Georgia's Greatest Poet" after his untimely death from tuberculosis in North Carolina when he was 39. He did indeed live in Montgomery, Alabama for a year or two  right after the Civil War when he was in his early twenties before moving a few miles east to Prattville and then home to Macon and on to Baltimore where he taught literature at Johns Hopkins before he died. 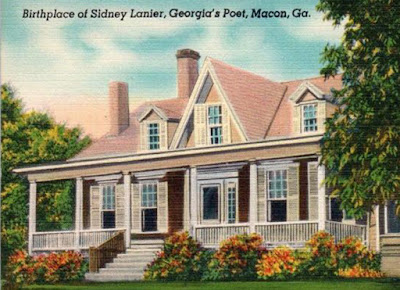 Lanier's birthplace in Macon remains a museum in his honor. 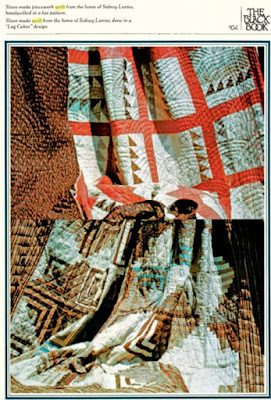 Middleton Harris included the same three "Slave-made quilts" from the Lanier home in his 1974
Black Book: The sawtooth quilt and a log cabin. Both quilts above look to have been made after the poet's death in 1881. 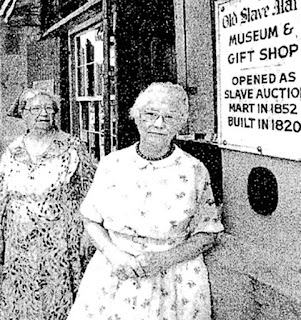 When these early books on African-American craft were published the quilts were in the collection of the Old Slave Mart Museum in Charleston, South Carolina, a private museum established by Miriam Bellangee Wilson (1878-1959). Friend Judith Wragg Chase took over after Wilson's death and with sister Louise Alston Wragg Graves bought the business in 1969, maintaining it until the museum closed in 1987. A recent newspaper article: "After which the city bought the building — but not its collection, which largely left town." Where this quilt had been for thirty years before the 2017 auction is unclear. 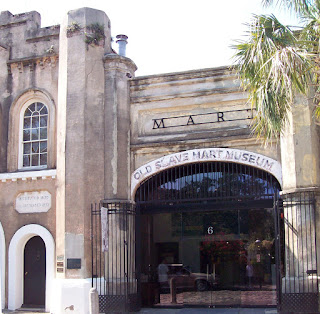 The city of Charleston owns the museum today

The Miriam Bellangee Wilson Papers at the Avery Research Center at the College of Charleston contain the old inventory of the collection:


"The majority of the slave crafts were collected by Miriam B. Wilson in the early quarter of the century and included items such as wrought and cast iron-work; quilts, comforters and homespun, hand-woven coverlets and sheets; tools, basketry, hand carved canes. The African art and artifacts in the collection were used to illustrate the direct relationship and similarities between art and craft skills and styles used by African craftsmen and those utilized by African-American craftsmen."

When one looks at the quilt's provenance one can understand the tentativeness of the historical links. The Wragg sisters had no way to know the date of a quilt with a story that it was made before the end of slavery in 1865. Small, private museums were earnest if often inaccurate purveyors of the history people wanted to hear. It's unlikely the quilt was made by a slave and also doubtful it had anything to do with Sidney Lanier. Was it worth the money paid two years ago? Only if you are looking for a quilt with a connection to the Miriam Wilson or the Wraggs and their Old Slave Mart Museum.

I find the design oddly appealing, though. It would be easy to reproduce, and a good choice to highlight a line of fabric or a scrappy quilt. A good choice for a leader-ender project, too.

It is a pretty quilt. Very cool and modern looking---as many Southern quilts of plaids and checks made in the early 20th century were.

A good choice for a leader-ender project, too.