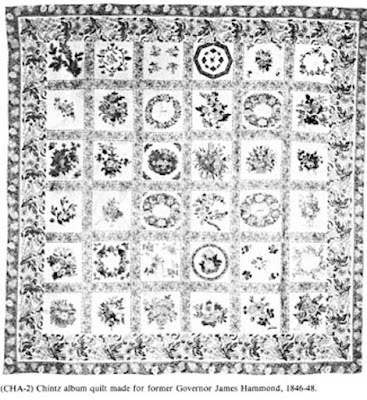 When researchers documented South Carolina quilts thirty five years ago, the family member who brought this chintz album dated 1846 to 1848 to be photographed recalled it as a gift for James Henry Hammond of South Carolina. It's pictured in the 1985 book Social Fabric: South Carolina’s Traditional Quilts by Laurel Horton & Lynn Robertson Myers. 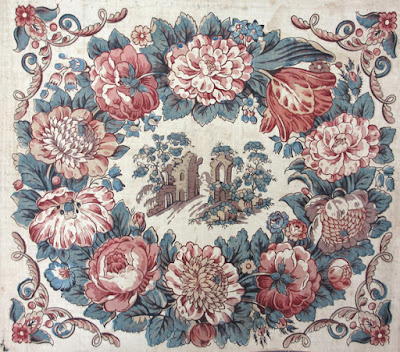 One would like to study each block with the chintz florals. Merikay Waldvogel recognized several wreaths cut from chintz panels like the one above with a small ruin in the center, probably printed for a chair seat. 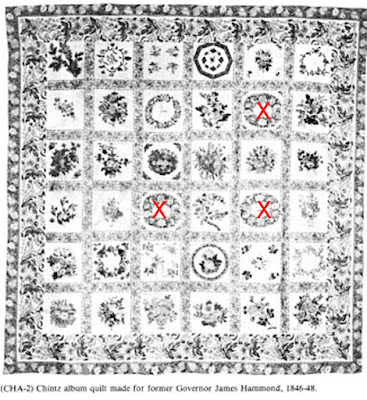 Three wreaths are cut from the panel.
See more about the panel here at our Chintz Panel blog:
http://chintzpanelquilt.blogspot.com/2018/06/gothic-ruin-panel-7.html

The dates 1846-1848 mean this bedcover is one of the later quilts in Merikay's Panel Database. The overall style of block style albums is a late development in Southern chintz style, replacing medallions. 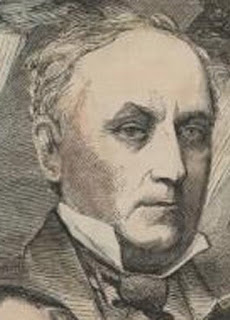 Hammond was a Civil-War-era politician, South Carolina's Governor 1842 to 1844 and U.S. Senator from 1857 to 1860. It's rather unlikely that the quilt was made for the former Governor as the wife of a descendant recalled, but rather for or by some female family members. 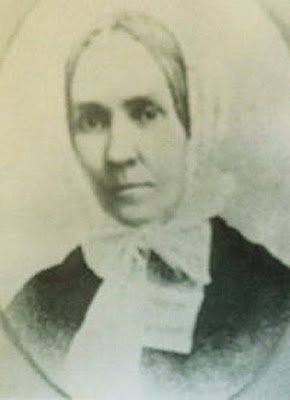 Wife Catherine E. Fitzsimons Hammond was about 40 when the quilt was made. Catherine met Hammond when she was 15. Not a pretty girl, her most attractive attribute was Silver Bluff, a 7,500 acre plantation with 150 slaves  near Augusta, Georgia on the South Carolina side of the Savannah River, which she'd inherited when she was 11. Hammond, considered quite a handsome man, was looking for a rich wife. Marrying a woman with less than $20,000 was "an act of insanity," he advised a brother. Hammond could be quite charming when it suited his purposes and at 17 Catherine defied her parents in 1831 by marrying the suitor they considered a fortune hunter. 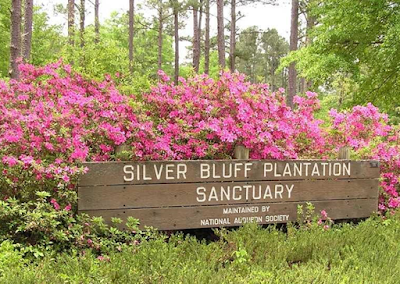 The newlyweds moved to Silver Bluff which Hammond put on a profitable basis while making a name for himself as a member of the South Carolina planter aristocracy, if an "ariviste," as writer Stephanie McCurry has called him. He propelled that position and a reputation as a fire-eater (fervant advocate of States' Rights) into antebellum political power. 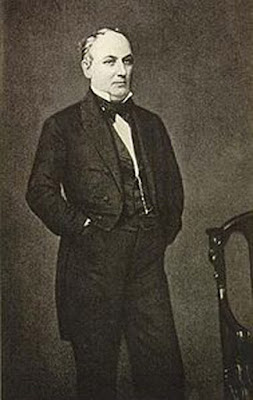 Portrait of Senator James H. Hammond from
the Brady Studios about 1859

Catherine gave birth every year during the 1830s, accompanying her husband to Washington when he was elected to the House of Representatives, an office he quit due to his health. Looking at Hammond's behavior today we can see he had several emotional problems and serious personality disorders. Her suffered from anxiety and probably panic attacks. As a narcissist focused on his own health he saw his chronic episodes of dizziness, headaches and digestive disorder as central to family life. 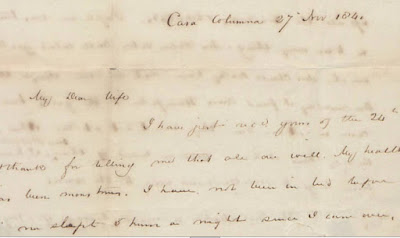 Letter to Catherine from her husband, 1840
University of North Carolina Libraries

"My dear Wife....My health has been monstrous."

He and Catherine went to Europe in 1836 for his health. Not surprisingly, he didn't care for England, France or Italy and their free labor systems. A measure of his charm: When they left the ship after the return voyage not one fellow passenger still speaking to him.

But belligerence and a sense of southern privilege was a political asset at home. They built a fine house in the state capitol of Columbia at the northwest corner of Blanding and Bull Streets. Hammond ran for governor, a race he first lost and then won in 1842. 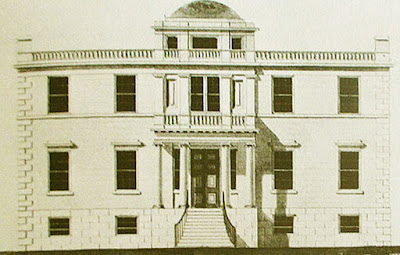 The Hampton House, built about 1818 on Blanding, still stands in Columbia

Catherine must have been pleased to live in that house near her late sister's family. Anna Fitzsimons had made a better match than Catherine, marrying Wade Hampton II of a rich and distinguished family, but she died after giving birth to her eighth child. Hampton did not remarry and the children undoubtedly found some sense of family in their aunt and uncle's home. 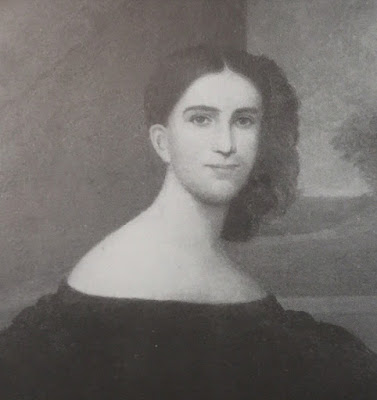 Wade Hampton never liked Catherine's husband but peace reigned between the families until eldest daughter Harriet Hampton complained to her father that the Governor had been sexually abusing her and four teenaged sisters. Proper protocol was to ignore such claims; disclosure would damage the girls' ever-important reputations, but Hampton's political and personal dislike of his brother in law inspired him to challenge the Governor to a duel. Instead he decided to ruin Hammond by spreading the story in gossip. 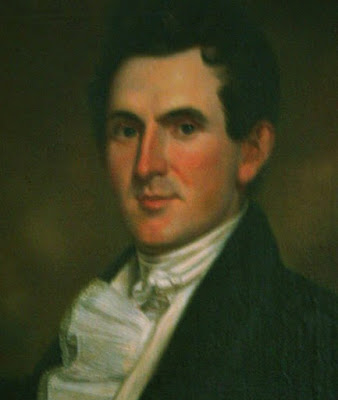 Hammond recognized his political career was over (and Hampton might just shoot him on the street) so the family returned to the Augusta-area plantations when his term ended in 1844. Catherine heard  rumors and suffered through the rift with her family but left nothing about her own feelings. Perhaps, like one of Hammond's friends, she was unable "to believe that anything really bad could be concealed under that beautiful face." 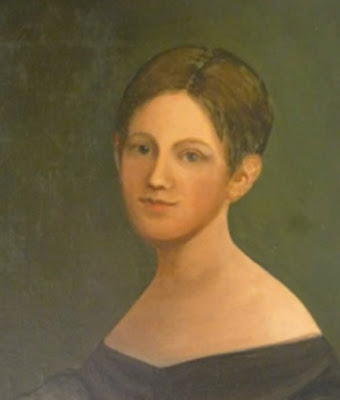 The Hampton girls suffered the most from innuendo about a scandal, described in detail or just a salacious mystery. "After all the fuss made no man who valued his standing would marry one of the Hampton girls," was one opinion. None married and they spent the rest of their lives living together, during the Civil War raising orphaned nieces and nephews at Millwood Plantation, which burned in 1865. Their sister-in-law Sally Baxter Hampton was not fond of  "the girls" writing at Christmas, 1855.


"Ann is a insane fool---ought to be in a strait waistcoat & should be if I could put her there."

The album quilt above was made during the years when the Hammond family retreated to the plantations near Augusta. Catherine might have ignored the gossip about her nieces but she was furious when she found out that James had children with two enslaved women, mother and daughter Sally and Louisa Johnson. In December, 1850 she took her daughters back to her parent's home in Charleston and lived apart from Hammond for five years. 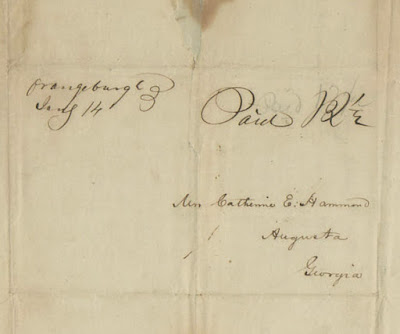 By 1855 the couple was living together again; some compromise must have been reached. The South Carolina legislature elected Hammond as a U.S. Senator in 1857 (enemy Wade Hampton died in 1858.) Hammond and Catherine returned to Washington, where they lived at Brown's Hotel, the fashionable place for Southerners to board until Hammond walked out of the U.S. Senate after Lincoln's election in 1860. The family returned to their home along the Savannah River.

Next week: Catherine Hammond during the war.

Hammond left a good deal of paper: letters, accounts and a strange, secret diary. One of the authors who has analyzed his life characterizes him as:


"an uncommonly mean man, a despicable character among a historical set that offered great competition for that particular distinction."

Fascinating....so sad about women of that era though.

How human we all are. You never know the story behind a quilt and the women who made it. Looking forward to more. Thank you

Wow! What a story. What a life. Hammond sounds like an awful character yet he went far politically.