Which Woolsey? A Sanitary Fair CDV 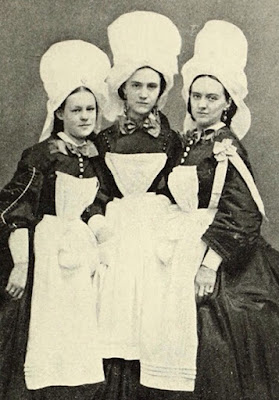 A rather mysterious photograph from the Metropolitan
Sanitary Fair in Manhattan in spring, 1864.
I've been looking closely at some of the Sanitary Fair photos
of women from the Civil War lately.

Some think it may be Union nurses and the women may well have served in military hospitals.
But this is not a nursing costume.

Jane E. Schultz, who has published two books on women's work in the Civil War, thinks
they might be wearing bakers' tocques. She wonders if they are well-known hospital workers Katharine Wormeley, Eliza Woolsey and Georgeanna Woolsey.  The captions from her Women at the Front. 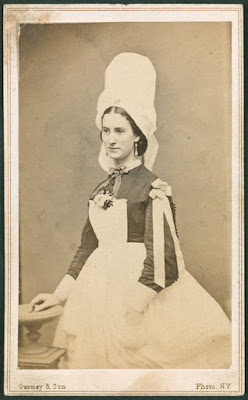 The Library of Congress captions the headwear as regional costume from Normandy, France.

"Costume of ladies at the Normandy stand, Metropolitan Fair, April 1864 / Gurney & Son.
Portrait of a woman in a traditional costume from Normandy, France

Me, I think that may be the most accurate description. 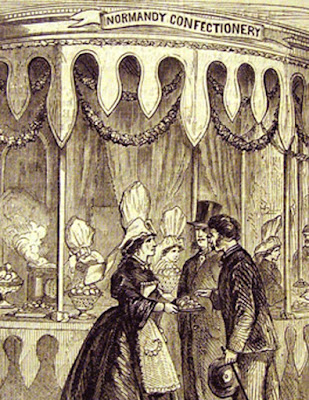 The Fair had a refreshment booth in which women in
similar hats and aprons sold "confectionery," probably baked goods. 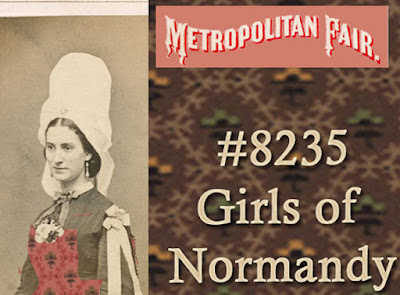 I liked that idea so much I named a print in my fabric line
Metropolitan Fair "Girls of Normandy." 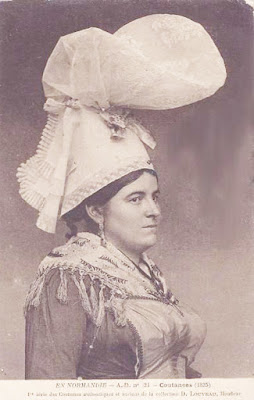 "En Normandie"
They do indeed have a traditional white head gear in Normandy.

I assumed (because we make dozens of assumptions every time we think about a historical image) that the Fair organizers had invited several young women from Normandy to run the booth. I realize now that would have been pretty expensive for a fundraising fair. Those are not French women at the Fair but rather New Yorkers dressed up in costumes to sell cake.

Jane Schultz thought the group of three might include some Woolsey sisters. The Woolseys were a wealthy New York family with well-earned reputations for hospital and Sanitary Commission work.
Six of the seven sisters: 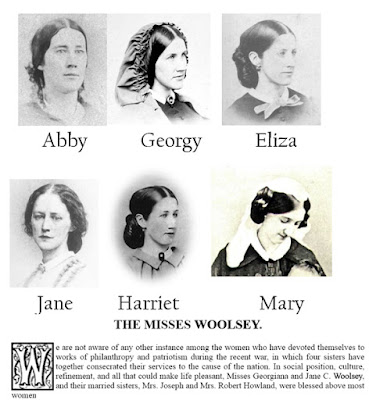 The family resemblance is so strong that it's hard to determine who is who, but Georgeanna is my
favorite Woolsey and I think the photo of the single woman is Georgy. 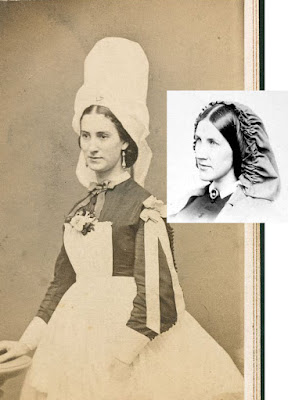 She would be a perfect vendeuse at the fair; every one knew of her; she was quite pretty
and---based on her letters---quite amusing. (That's why she's my favorite.) 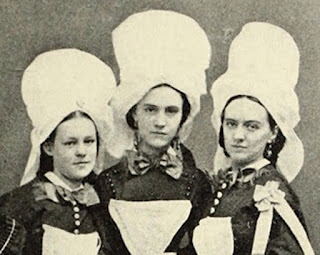 That might be Georgy again in the center of the triple portrait
although she is not wearing the same neckwear.
But of course it could be Jane, Harriet or Eliza.
The women on the sides? 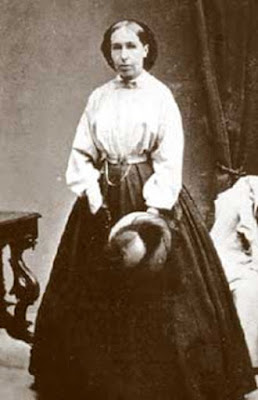 I doubt any of them are Rhode Islander Katherine Wormeley as she has a longer face. This photo in Civil Ware era attire would seem to be a picture of her when she was in her 30s. 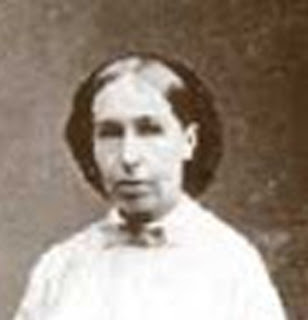 Katherine worked with the Woolseys in Civil War hospitals.

Read Volume 1 of the Woolsey letters here:
Letters of a Family During the War for the Union, 1861-1865
https://books.google.com/books?id=gZA_AQAAMAAJ&printsec=frontcover&source=gbs_ge_summary_r&cad=0#v=onepage&q&f=false
Posted by Barbara Brackman at 6:00 AM

I don’t know nothing about all this you talked about, but it’s interesting to know something new! The fabrics collections are fabulous!

My first impression was that the hats/bonnets were ethnic. Turns out my guess was right!
What immediately came to mind with the Woolseys was the name Lindsay. LOL! (I actually knew a girl named Celanese Fortrel.)

If the three women were the Woolsey sisters, my guess is (from left to right) Abbey, Jane, and Mary Woolsey. Great detective work on figuring out the origins of the costumes!

I enjoyed wearing my little nurses cap, but those are really bad in comparison. I wonder if they felt the same way as me. There are very few nurses wearing caps anymore.

That is some fascinating head wear.

Maybe the Normandie ladies were members of a social group of that ethnicity. NYC had many diverse immigrants at that time, who possibly formed social groups honoring their backgrounds/ finding friends of similar lineage and traditions. And it is then possible that a social group might have a fair booth to raise charitable donations. ???

For some reason those tall women's caps make me think of a chef's hat, tall and outrageously inconvenient when bending over to look into an oven!