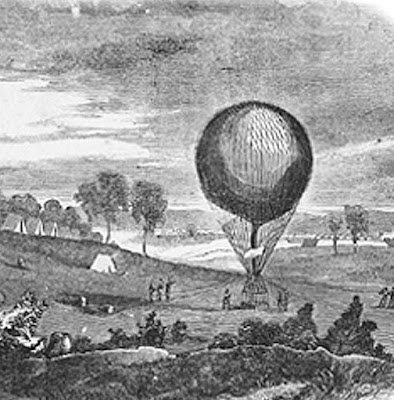 Union Balloon used for enemy reconnaissance
From Harper's Weekly in 1861.
Both sides used balloons for observation during the first years of the Civil War.

A colorful story tells us of the Confederate balloon Gazelle. In his 1886 memoir Confederate General James Longstreet recalled a time in 1862 when:

"longing for the balloons that poverty denied us, a genius arose for the occasion and suggested that we send out and gather together all the silk dresses in the Confederacy and make a balloon...soon we had a great patchwork ship of many and varied hues."

John C. Stiles writing in 1919 in the magazine Confederate Veteran mentioned the balloon "made of ladies' silk dresses called The Lady Davis."

Longstreet's tale of a balloon pieced of women's donated dresses, "the last silk dress in the Confederacy" became a legend of generosity from the women of Richmond, in particular. But like most colorful stories the truth is a little more gray. 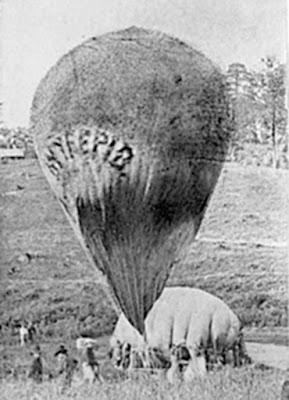 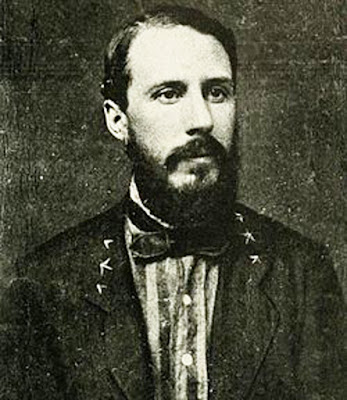 In 1989 a previously unpublished memoir by the balloon's pilot Southern General Edward Porter Alexander appeared with a more likely story:

"Dr. Edward Cheves of Savannah conceived the idea of making a balloon...an uncle of my friends...He was wealthy & he was a very remarkable & skillful mechanic & chemist & engineer. He bought up all the silk to be found in Sav.[annah] and Charleston ...& at last completed a very excellent balloon & brought it on to Richmond...." Fighting for the Confederacy: The Personal Recollections of General Edward Porter Alexander 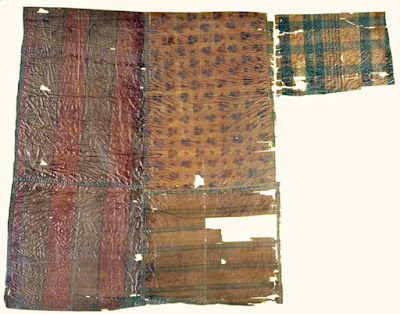 The Smithsonian's National Air and Space Museum has two pieces---
plaid and print. Both are about 13" wide. I lightened up their photo to see the pattern.

Richmond's American Civil War Museum
has a framed piece with the same fabrics.

The silk yardage was probably pieced in strips and treated with a sealing varnish.
The Gazelle must have been a pretty sight as it floated over Virginia in the summer of 1862. 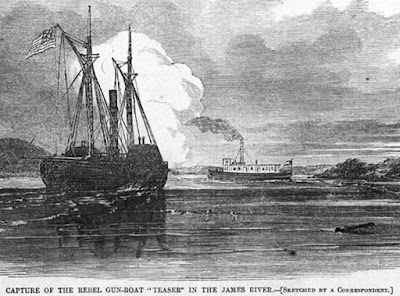 Capture of the Teaser on the James River from Harper's Weekly

The Gazelle was captured by the USS Maratanza while being transported aboard the CSA Teaser in July, 1862. The balloon was given to the Chief Aeronaut of the Union Army Thaddeus Lowe, who apparently cut it into souvenir pieces. Professor Lowe in His Balloon from the Brady Studios 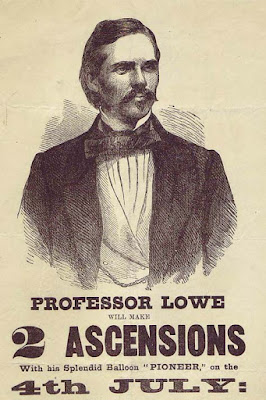 After the war Lowe moved to Pasadena, California and after his death his family donated these fragments. I've also seen a reference that members of the U.S. Congress were given pieces during the war.

There must be more pieces of the silk balloon somewhere. 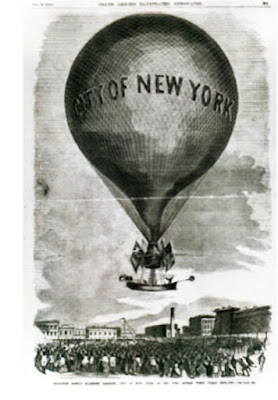 From the Altadena Historical Society

Lowe's balloons seem to have been made of cotton or linen.
I wonder why Cheves chose silk.

Your research story makes more sense. I can't see the ladies giving up their dresses when they had no idea when the could ever get another. Especially if the balloon was made post-war. Maybe silk was used because, as for parachutes, it is strong but lightweight? [ho presumably modern parachutes---and balloons---are made of something synthetic and high tech new.

Edit: On rereading I d see the silk balloons were made during the war, not after.

It's not to surprizing that the purchased silk yardage was romantsized into donated silk skirts. People were always donating domestic items for "the Cause" and the fabrics were garment fabrics?! Thank! I enjoy all your blogs, so much!

The balloons proved to be an inspiration for decades to come and one of those that was observing the war would internalize their use and expand upon them in ways that were amazing.

Thanks for sharing this Barbara!