On June 25, 1864 Emilie Davis and Sarah Wister, living together in Germantown, Pennsylvania, “went to town [Philadelphia].” In her diary entry for the day Emilie wrote they went “to see the great Fair…I was delighted with the fair it was beautiful.” She enjoyed herself so much she made an extra note at the end of her annual pocket diary where she had a little more room to write. 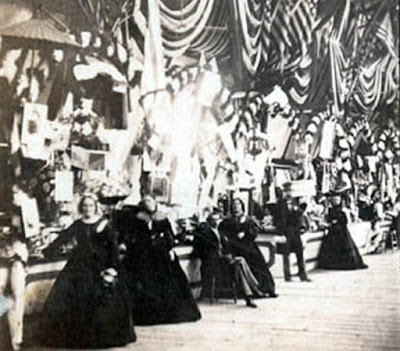 “Visited the [fair] with Mrs. Wister it certainly was worth going to. We visited all the Principle Places of interest. When I came out I had seen so much I hardly could recollect who I had seen. I saw a perfect deal of handsome work but I did not see any done by any colored person. There might of been some things there I did not see.” 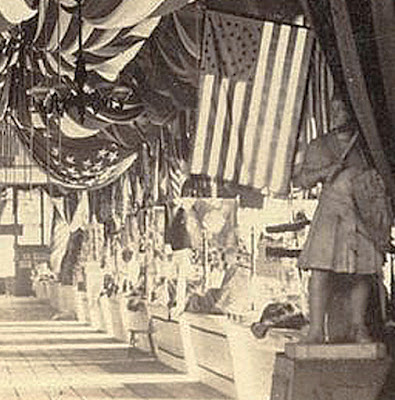 Detail of the New Jersey booth in Philadelphia

Emilie herself was a "colored person,” a young Philadelphia seamstress and domestic worker who avoided Philadelphia’s hot and sickly summers by seeking an annual situation as a maid in the suburbs. Summer, 1864 took her to the Wisters in Germantown. 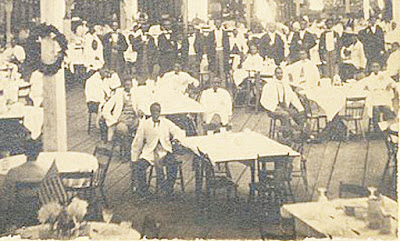 Wait staff at the Fair's Dining Room
Let's hope Emilie got to eat lunch with all those guys.
She may have known some of them.

Emilie was probably right about the lack of displays by her own community. The fair's committee and the U.S. Sanitary Commission generally excluded African-Americans, according to city historian Kerry Bryan. "Black congregations such as St. Thomas African Episcopal Church formed their own sanitary committees, which raised funds and channeled supplies to the U.S. Colored Troops and other Union soldiers." 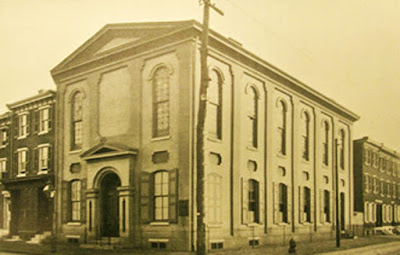 Emilie was a member of Philadelphia's First African-Presbyterian
Church, then at the corner of
7th & Shippen (Bainbridge).

We know a good deal about Emilie Frances Davis ( 1838-1889) through the daily diary entries she kept during the Civil War. Employer Sarah Butler Wister (1835-1908) also kept a Civil War diary, but we know far more about her because she was a link between two 19th-century celebrities. 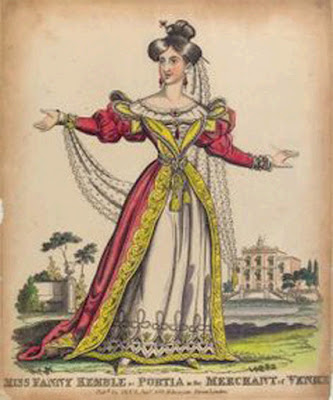 Her mother was actress Fanny Kemble; her son novelist Owen Wister who wrote The Virginian. 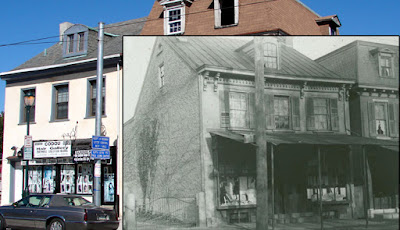 Sarah Butler and Owen Wister's Germantown home in 1860
when Owen II was born on the right. They moved to a nearby
house that is no longer there.

On June 7th, 1864 Emilie “started for Germantown” to live with Dr. Owen Wister, Sarah and four-year-old Owen Wister II. “It is very pleasant out in Germantown.” But she was soon lonesome for young friends from the city and Sarah did not leave her much idle time. “Mrs. Wister is sure to find something for me as soon as I have finished one piece, she has another." Duties included cleaning the house and caring for Owen. 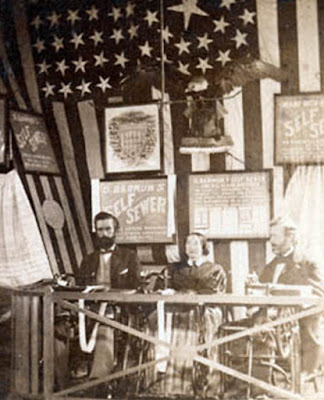 "Dr. Barnum's Self-Sewer" display at the fair. Perhaps the
women were convinced by this demonstration that Sarah Wister needed one.

Emilie also sewed, practicing on a new sewing machine, probably purchased by the Wisters. It’s confusing during the summer whether Emilie is “out” in Germantown or back “in town,” On August 15th she noted “Things glum as usual…out here.“ The next day: “I have been sewing on the machine, It gives me a great deal of trouble.” Despite her emotional ups and downs she enjoyed her summer at the Wisters, according to biographer Karsonya Wise Whitehead.

By the end of September she seemed to be back in the city at her boarding house with no more mention of the machine or the Wisters. October 10: "I have been sewing away.”

It’s pleasant to imagine Emilie and Sarah, both in their late twenties, spending a day at the Philadelphia Sanitary Commission Fair, pointing out their favorite displays and buying a few knicknacks for the cause. Sarah, a member of  the fair committee, had probably attended several times but she may have thought her servant would enjoy a visit before it closed. 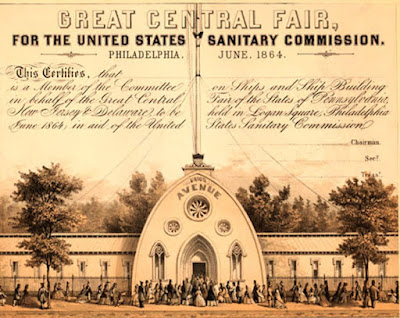 The temporary building was supposedly constructed in 40 days.

See more about the Philadelphia Fair:http://philadelphiaencyclopedia.org/archive/civil-war-sanitary-fairs/ 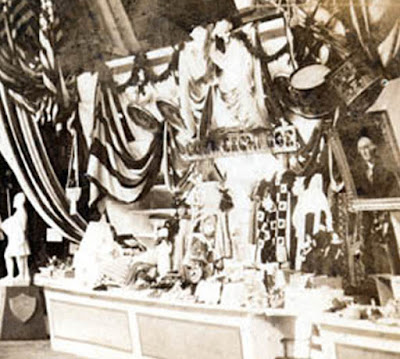 Needlework and other hand made items.
School children made afghans, pincushions and quilts to sell.
One display mentioned in the souvenir book was a quilt by Martha Washington. 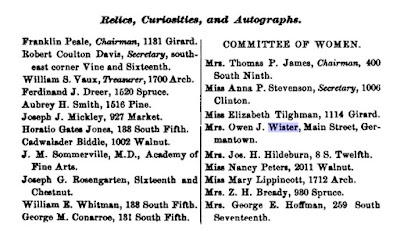 As a member of Philadelphia's social elite Sarah Butler Wister
was on the fair committee in charge of
"Relics, Curiosities and Autographs" 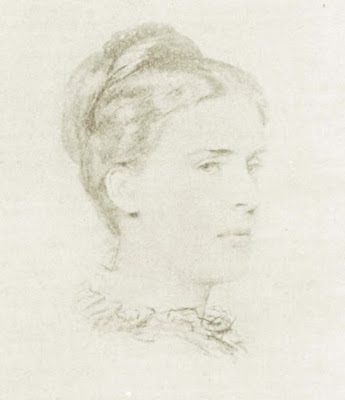 Read Emilie Davis's 1863-1865 diaries in one of two ways.
Online: Villanova University has transcribed the diary and made it available on line:
https://davisdiaries.villanova.edu/about/

In print: Notes from a Colored Girl by Karsonya Wise Whitehead.
See Kaye Wise Whitehead talk about the diary in this video:
https://www.youtube.com/watch?v=W6r5vHv0I-Y
UPDATE:
And I recently read a third version Emilie Davis's Civil War edited by Judith Giesberg.
https://www.google.com/books/edition/Emilie_Davis_s_Civil_War/fv4pDAAAQBAJ?hl=en&gbpv=1&dq
Posted by Barbara Brackman at 6:00 AM

These are always so fascinating. You capture such a scene of the lives of these ladies (& gentlemen) and their activities.

After reading a previous Civil War Quilts blog I was able to obtain a copy of Letters of a Civil War Nurse by Cornelia Hancock. This is an extraordinary collection of her letters describing her experiences when nursing the soldiers. Highly recommend. Thanks to this blog for mentioning it.