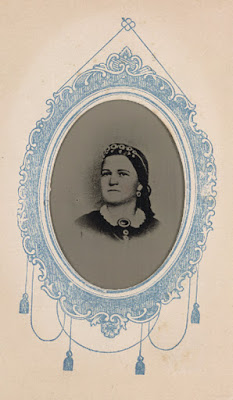 Mary Todd Lincoln
Copy of a photo by Wenderoth and Taylor, 1864
Library of Congress
https://www.loc.gov/photos/?q=mary+todd+lincoln

The New York Times noted a silk quilt displayed at the Soldier's Fair in Washington in the summer of 1866. The two-sided quilt, which had been loaned by Mary Todd Lincoln, widow of the President, was described as:


"A silk bed-quilt, on which much tasteful needlework is displayed. It bears in the centre a blue star in a white field, on which are lesser stars corresponding with the number of States [which] MR. LINCOLN believed to be in the Union after the rebellious attempt to shatter the Government had been defeated. Among these stars is the national eagle, and around it the motto, "E Pluribus Unum". The quilt is bordered with stripes of red and white. On the other side, in splendid embroidery, are represented beautiful flowers, the All-seeing Eye which watches over our country's industry, and an arm-chair representing the Chair of State. This specimen of needlework was a present to MR. LINCOLN from MRS. WILLIAM BARLOW, of Oregon, in 1861."

Martha Ann Partlow Allen Barlow (1822-1902) was a well-known Oregon pioneer. She came west in 1850 with her second husband Dr. William Richardson Allen, who died soon after, leaving her with six children. She married a third time (and a third William) in 1852. She and William Barlow had three more children and thrived in Clackamas County where they founded the city of Barlow. 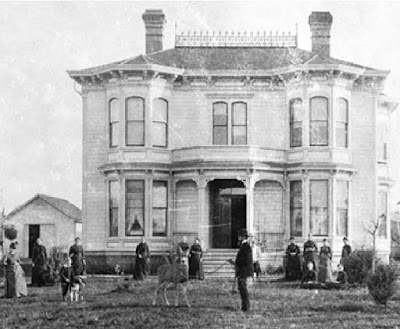 The Barlows' second mansion, built after the first burned.
The Barlow House survives near Barlow in western Oregon.
We'd guess Martha is in the photo from the late 19th century.
UPDATE: Dustin noticed the deer on a leash

Martha, a Virginia native, brought two African-American servants with her and built a Southern style mansion, but apparently her heart was with the Union as she named her last child, born in 1859, Cassius Union Barlow.  The Barlows celebrated Lincoln's inauguration with a dinner and ball in March, 1861. The pair were active in the Sanitary Commission during the War. 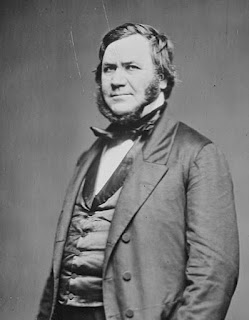 Senator James W. Nesmith of Oregon
was one of  only two Democrats to vote for the 13th
Amendment to abolish slavery.

In  December 1861 she sent her silk quilt to the President in the hands of the new state's first Senator James W. Nesmith. Apparently the Lincoln family kept it through the War, and after Lincoln's assassination Mary Lincoln loaned it for exhibit at the Washington Fair in the summer of 1866.

In 1899 the bedcover seems to have been back in Martha Barlow's hands.  She exhibited it in the window of  The Dalles Times-Mountaineer newspaper office with the Thank-You letter from Lincoln.

UPDATE: Abelian pointed out in the comments that Martha was not exhibiting the quilt in Oregon. The relic discussed was the Thank You letter from Lincoln. So we can't track the quilt beyond the 1866 Fair when Mary Lincoln loaned it.
So here's the rewrite:

In 1899 Martha Barlow exhibited her Lincoln letter in the window of  The Dalles Times-Mountaineer newspaper office. 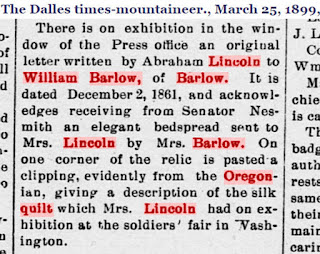 She also showed the Lincoln letter to the editor of the Oregon City Press, which printed the contents. 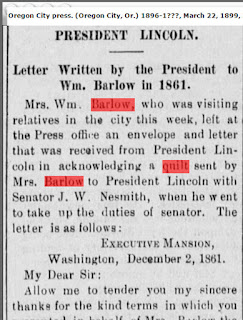 "Letter Written by the President to Wm. Barlow in 1861. Mrs. Wm Barlow, who was visiting relatives in this city this week, left at the Press office an envelope and letter that was received from President Lincoln in acknowledging a quilt sent by Mrs. Barlow to President Lincoln with Senator J. W. Nesmith, when he went to take up the duties of senator. The letter is as follows:

'Executive Mansion, Washington, December 2, 1861. My Dear Sir: Allow me to tender you my sincere thanks for the kind terms in which you presented in behalf of Mrs. Barlow the beautiful bedspread which I have just received from the hands of Mr. Nesmith. Be kind enough to convey to her my grateful acknowledgements of her goodness and believe me very truly Your obedient servant A. Lincoln.' "

Martha's silk quilt is distinctive enough that we'd recognize it if we came across it. We are looking for a two-sided bedcover, perhaps quilted. On one side: Floral embroidery with the symbol of the All Seeing Eye and an Arm Chair. 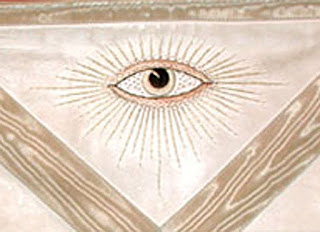 Masonic symbol, the All-Seeing Eye, embroidered on a Masonic apron.

On the other side: Starry field in blue with an eagle and the national motto "E Pluribus Unum" bordered by red and white stripes. 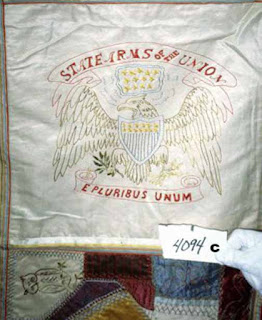 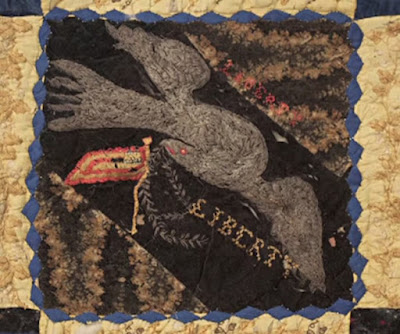 Center of the quilt by Elizabeth Keckley
in the collection of Kent State University Museum.
The eagle was done in silver thread, which has tarnished.

There's some confusion with another quilt connected to Mrs. Lincoln. Elizabeth Keckley, her friend and dressmaker, made a quilt with an eagle in the center from the First Lady's dress fabrics. It may also have been sold for charity. But the Barlow quilt is a different quilt.
See the Keckley quilt here:
https://www.whitehousehistory.org/photos/photo-2-26

The first place I looked for the Barlow quilt was in the Quilt Index which has digitized the findings of the Oregon Quilt Project. Surprisingly there is an embroidered and appliqued Oregon quilt with the words "E Pluribus Unum" but this is not it
. 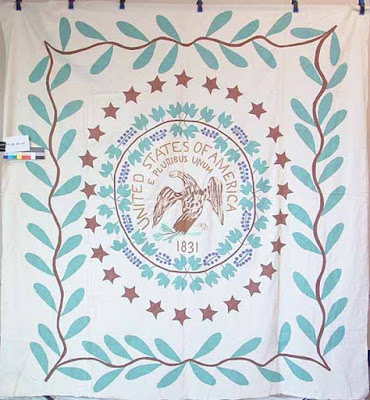 Quilt with 25 stars by Anna Huber Creitz (1872-ca. 1995).
made in the mid-20th century (although the date is 1831). One wonders
if Portland resident Anna Creitz might have seen the Lincoln quilt.

Finding the Barlow quilt would be nice, to say nothing of finding the letter from Lincoln.
Posted by Barbara Brackman at 6:00 AM

Interesting post. I would hope the quilt is secured safely in a museum somewhere. To know so much about it and not have knowledge of its whereabouts is sad.

You know, you are right. It may just be the letter she displayed at the newspaper office. So the quilt may have stayed with Mary Lincoln. Thanks for pointing that out. I'll look in my files to see if there's any clarification of window display.

Also, is that a deer in the photo of the house or a really tall wolfish dog??

Dustin. it appears to be a deer on a leash.

To know so much about it and not have knowledge of its whereabouts is sad.